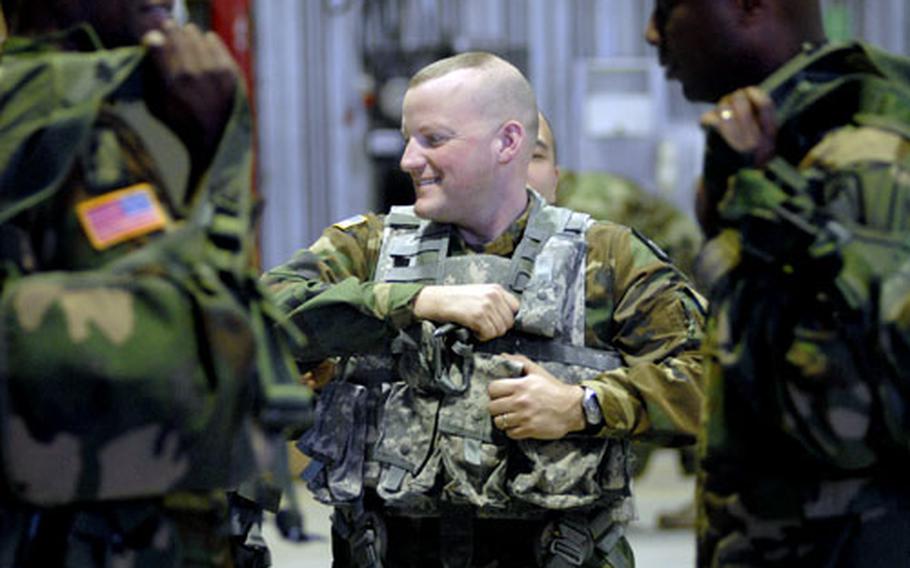 Wearing some of the newly-issued gear, Spc. Jose Rivera, a flight medic with the 236th Medical Company Air Ambulance, prepares to be lowered on a hoist operated by Spc. Federico Quinones, a crew chief also assigned to the 236th, Wednesday in Landstuhl, Germany. (Ben Bloker / S&S) 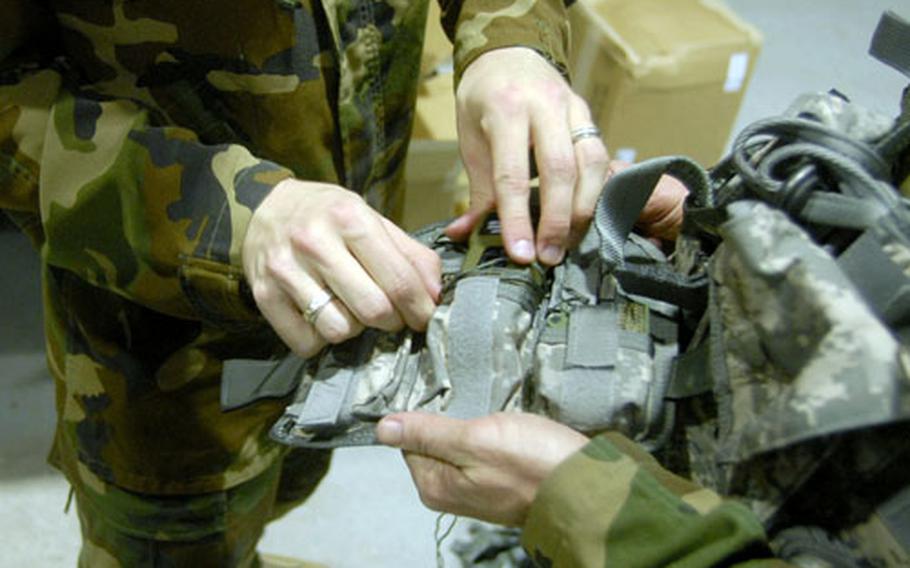 LANDSTUHL, Germany &#8212; On the hottest days in Iraq, the inside of a helicopter can exceed a stifling 130 degrees Fahrenheit.

But with a high-tech Army vest that acts like a personal, wearable air conditioner, designers say aircrew members can fly longer and farther without succumbing to heat stress.

The Microclimate Cooling System is just one of many pieces of new gear handed out to members of the Landstuhl-based 236th Air Ambulance Company and put on display Thursday.

The Army delivered its 10,000 predeployment Air Warrior kit, the latest in personal survival gear, to one of the company&#8217;s soldiers as part of a ceremony to mark the milestone.

Brig. Gen. Mark Brown, commander of the Fort Belvoir, Va.-based program that develops and delivers what soldiers wear and carry, fitted Sgt. Justin Hutchison with the 10,000th survival vest and gear inside the company&#8217;s hangar.

Chief Warrant Officer 2 Josh Collins, one of 32 pilots assigned to the Landstuhl unit, received the 1,000th Electronic Data Manager &#8212; a portable touch-screen computer with GPS that pilots strap to their thigh during flights.

Lt. Col. Shannon Womack, product manager for the Air Warrior program, said another 9,000 of the kits will equip all Army aircrew members.

Every crewmember in Iraq and Afghanistan is currently using the gear.

The wearable outfit offers ballistic and chemical protection along with everything a soldier needs to survive in and out of the helicopter &#8212; including signaling and communications equipment and a first aid kit.

Staff Sgt. Thomas Rath, a flight medic, likes the gear, which he says is more comfortable and slightly lighter than the older models.

Much of the ensemble contains many of the things aircrew members have always had, but what really sets the gear apart from the past is the cooling system that is worn under the uniform.

A small box called a Microclimate Cooling Unit chills water to 65 degrees and pumps it through small tubes into the vest. Designers say the vest increases mission endurance by 350 percent, from 1.6 hours to 5.7 hours, because the soldiers remain cool when the temperatures get dangerously hot.

Similar cooling vests that hook up to a Humvee&#8217;s air conditioning system are being used by soldiers in Iraq.

In addition to the Landstuhl air ambulance company, members of the 5th Battalion, 158th Aviation Regiment in Germany received the latest field gear &#8212; which includes a new helmet, laser target systems and miniature binoculars &#8212; in preparation for their deployment to Iraq next year.