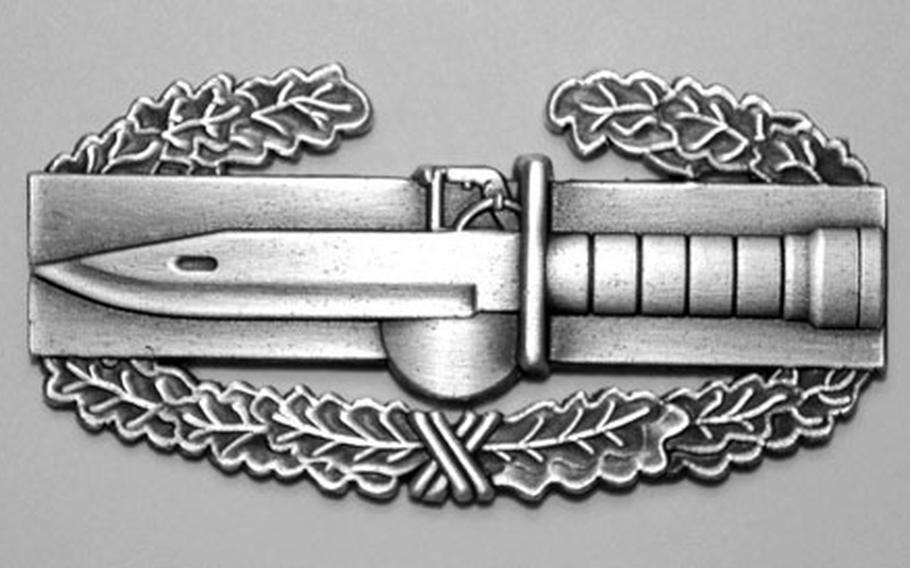 The new Cambat Action Badge badge has a rectangular design and encircling laurel wreath that echoes its inspiration, the Combat Infantry Badge. (Courtesy of U.S. Army)

ARLINGTON, Va. &#8212; Infantry soldiers are eligible to receive the Army&#8217;s new badge acknowledging a soldier&#8217;s participation in active fighting &#8212; but only if they are not assigned directly to an infantry battalion.

That eligibility question &#8212; and many others surrounding the Combat Action Badge, or CAB &#8212; have been answered.

Until Army Chief of Staff Gen. Peter Schoomaker approved the CAB on May 2, the only Army badges acknowledging action during wartime were the World War II-vintage Combat Infantry Badge, which to this day is reserved for infantry and Special Forces, and the Combat Medical Badge for medics.

The new badge, on the other hand, is available to any active, Reserve or National Guard soldier who is &#8220;personally present and actively engaging or being engaged by the enemy, and performing satisfactorily in accordance with the prescribed rules of engagement,&#8221; according to initial criteria issued by Army officials May 4.

A June 3 letter from Schoomaker to his field commanders, containing detailed criteria and issuing instructions, answers many of soldiers&#8217; questions about the new badge.

Q: Am I eligible for both the CIB and the CAB?

A: Infantrymen are eligible to receive the CAB, but only if the combat action that sparks its award occurred at a time when they were &#8220;not be assigned or attached to a unit that would quality&#8221; for the Combat Infantry Badge, according to the instructions.

However, an 11B assigned to a Corps headquarters when the action occurred is eligible for a CAB, the instructions say.

The instructions also make it clear that infantrymen can be awarded both the CAB and the infantry badge (and the medic badge, for that matter, if they qualify) for actions performed &#8220;in the same qualifying period, provided the criteria for each badge is met.&#8221;

Q: Can I be awarded the CAB more than once?

A: It&#8217;s possible, the letter says; second and third awards would be marked by stars centered on the badge&#8217;s wreath.

However, only one CAB can be awarded &#8220;during a qualifying period,&#8221; the instructions say.

A: No. While the badge has a retroactive eligibility date of Sept. 18, 2001, &#8220;award for qualifying service in previous conflicts is not authorized,&#8221; the instructions say.

Q: I think I qualify for the new badge. How do I apply for it?

A: Soldiers who are in combat zones should ask their immediate commanders how to apply.

Those soldiers who are no longer in combat zones must have their applications for the CAB &#8220;forwarded through the first two-star general in their chain of command&#8221; to the Army&#8217;s Human Resources Command, the instructions say.

The CAB instructions letter is available here in PDF format.