Army decides it takes an airlift to raze a radio station 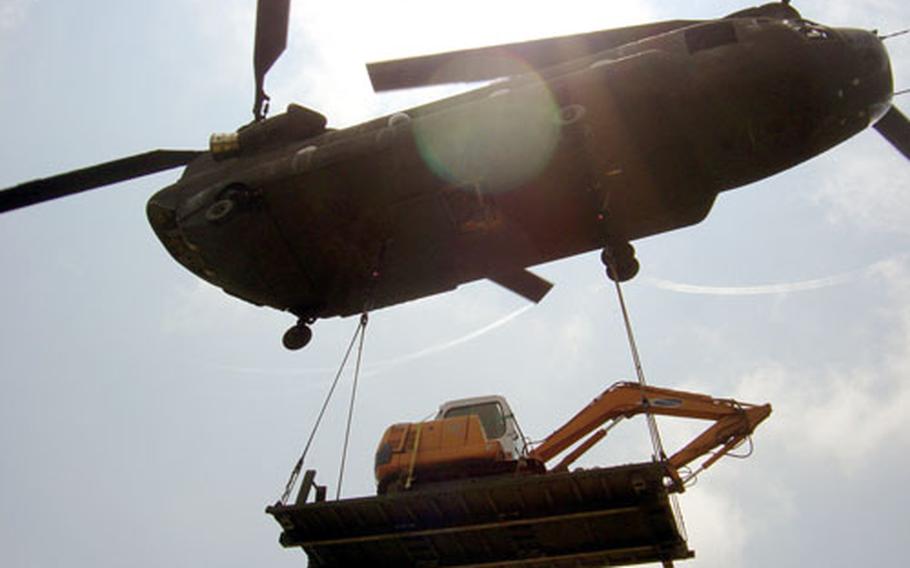 A CH-47 Chinook helicopter of Company A, 2nd Battalion, 52nd Aviation Regiment out of Camp Humphreys, South Korea, hauls a piece of construction equipment to a U.S. Army communications site atop a mountain near Kumi City on Monday. The Army&#39;s 36th Signal Battalion at Camp Walker in Taegu is demolishing old buildings at the site and plans to upgrade its radio equipment there. (Courtesy of U.S. Army)

A CH-47 Chinook helicopter of Company A, 2nd Battalion, 52nd Aviation Regiment out of Camp Humphreys, South Korea, hauls a piece of construction equipment to a U.S. Army communications site atop a mountain near Kumi City on Monday. The Army&#39;s 36th Signal Battalion at Camp Walker in Taegu is demolishing old buildings at the site and plans to upgrade its radio equipment there. (Courtesy of U.S. Army) 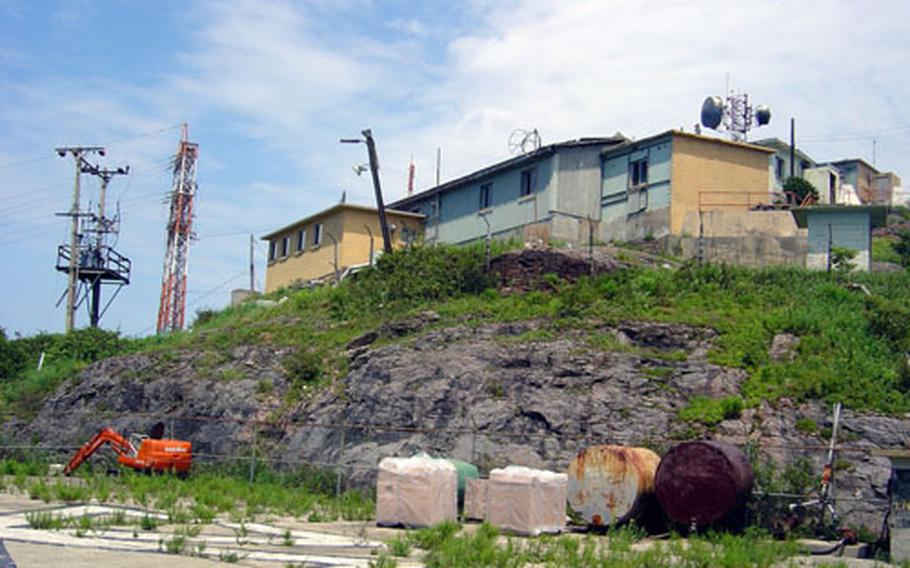 These are some of the structures set for demolition at a U.S. Army radio site atop a mountain near Kumi City in lower South Korea. The 36th Signal Battalion is upgrading its communications equipment at the site, and an Army helicopter had to airlift construction equipment to the peak Monday because the mountain has no roads to the top. (Courtesy of U.S. Army) 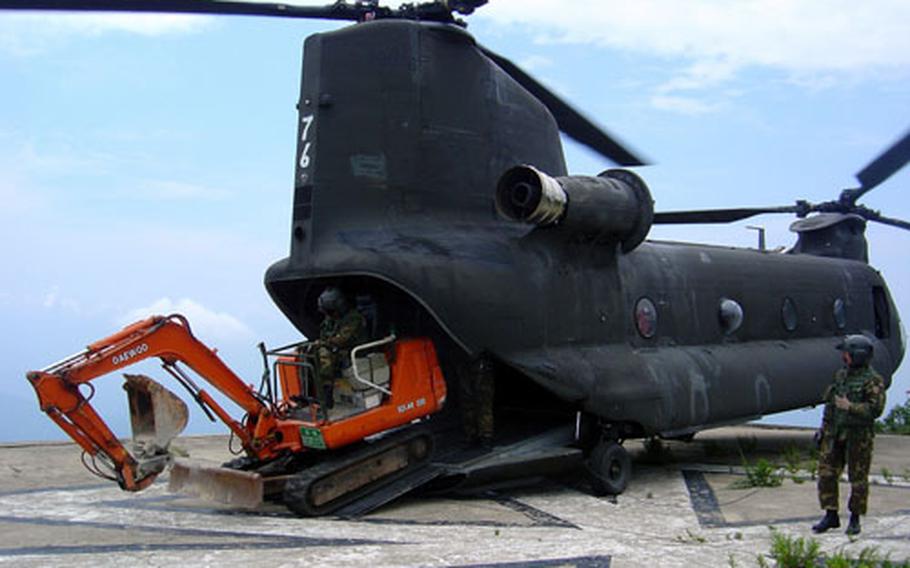 At a U.S. Army radio site on a mountaintop in lower South Korea, a CH-47 Chinook helicopter disgorges an excavator that will be used in demolishing old buildings at the site, about 3 miles west of Kumi City. (Courtesy of U.S. Army)

Not long ago, the U.S. Army in South Korea faced the problem of getting almost 17 tons of construction equipment to the top of a mountain that had no roads.

The Army wanted to tear down 11 old buildings and upgrade communications equipment at its Kumo Mountain radio site, which rises 3,320 feet above the fields and foothills of north Kyongsang Province, about three miles west of Kumi City in southeastern South Korea.

They solved the problem Aug. 9 thanks to helicopters from Camp Humphreys that airlifted the gear to the mountain in three trips.

The workers reached the site by hiking the mountain&#8217;s slopes, a climb of two to two-and-a-half hours, Chong said.

The battalion maintains the fenced, six-acre compound on the mountain, which the Koreans call Kumo-san. The Army calls the compound Salem Top. In its heyday, soldiers lived at Salem Top, which boasted its own chow hall, barracks, operational buildings and sheds.

But by the early 1990s, thanks to radio technology advances, the Army no longer needed troops there, Schonberg said. It could operate its radios by remote control. It pulled the troops and padlocked the site.

Then, with still further advances in radio gear, the Army this year wanted to install the newest equipment. And while at it, the Army officials decided it was time to get rid of the old buildings, which were just too hard to maintain.

The Shinsheang Construction Co. Ltd. of Seoul is carrying out the $200,000 project under contract with the U.S. Army Contracting Command-Korea.

&#8220;What happened here was the contractors had to move some serious equipment up this mountain,&#8221; said Capt. Matthew Bowman, commander of Walker Army Heliport at Camp Walker in Taegu. &#8220;Civilian assets were not capable of doing that, and you can&#8217;t just drive it up the mountain. So they asked the military to do it.&#8221;

The Army got rigger teams together at Camp Carroll in Waegwan and began readying the cargo for airlift.

Among the load were two excavators, one weighing just over 14,300 pounds, another 7,700 pounds. Also going were boxes of food, construction tools and related gear.

The first load went in aboard a CH-47 Chinook helicopter of Company A, 2nd Battalion, 52nd Aviation Regiment. The smaller excavator was put inside the Chinook along with two big containers of food.

The Chinook then flew back to Camp Carroll and picked up the bigger excavator, which hung suspended below the aircraft in a cargo sling.

A third trip brought in four boxes of various construction equipment and tools weighing a total of about 14,000 pounds. This too was hauled in a sling.

In building the site in the early 1960s, the Army relied partly on helicopters but mainly on gangs of Korean laborers who hauled concrete blocks, lumber, and other materials on A-frames strapped to their backs, said Ronald Teets, the 36th Signal Battalion&#8217;s chief of plans.

&#8220;Originally, when we put Salem Top on the mountain we had helicopter support and what we called Chogi boys &#8212; local Korean laborers with A-frames. They carried supplies and materials up the mountain,&#8221; Teets said.

Everything else went up the hard way.