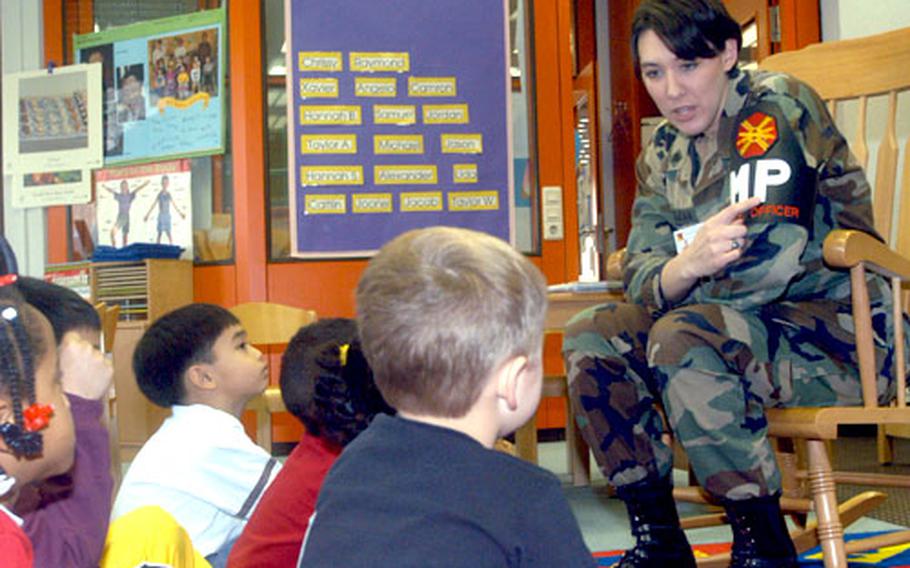 RHEIN-MAIN AIR BASE, Germany &#8212; After a one-year hiatus, schoolchildren at Rhein-Main Air Base can again take a D.A.R.E.

For the past year, the Drug Abuse Resistance Education program was suspended at Rhein-Main after D.A.R.E. officers were asked to take a new, nine-week recertification course at a cost of $5,000. Lack of funding prevented attendance.

This year, Air Force officials sought outside help to get the program going again. The provost marshal office for the Army&#8217;s Headquarters and Headquarters Detachment, 221st Base Support Battalion, in Wiesbaden, stepped up, providing a D.A.R.E. officer once a week to teach kindergartners about safety, while older children learn how to say no to drugs.

&#8220;This is not only a case of the Army helping the Air Force, but of helping children in [Department of Defense Dependents Schools],&#8221; said 1st Lt. Jeff Adams, chief of security forces on Rhein-Main.

&#8220;I&#8217;m beside myself that the Wiesbaden MP unit would come to the Rhein-Main community and help save us money and the manpower it would take to send someone to training.&#8221;

The program was started in 1980 by the Los Angeles Police Department, MacLean said, to teach responsibility and ways for elementary, middle, high school and after-school students to resist peer pressure that influences them to experiment with alcohol, tobacco, marijuana and other drugs.

The program has spread, now reaching more than 36 million children worldwide, according to the official D.A.R.E. Web site.

D.A.R.E. was developed by educators and is taught by trained officers, usually civilians stateside, and military in DODDS facilities overseas, to help keep children safe and off drugs.