Army cutting brigades at 10 US bases 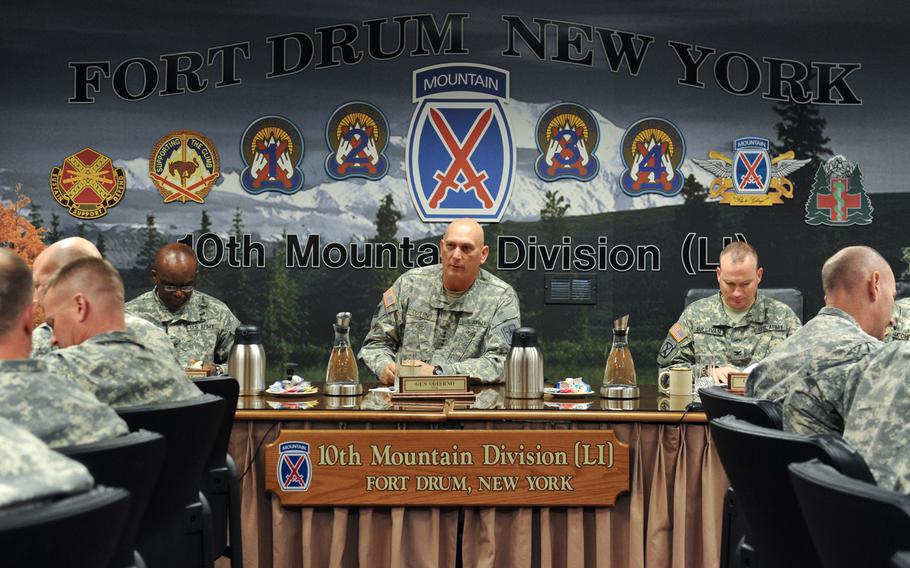 U.S. Army Gen. Raymond T. Odierno, Chief of Staff of the Army, meets with battalion and brigade commanders from the 10th Mountain Division during his visit to Fort Drum, N.Y. in this Oct. 2011 photo. Odierno said June 25, 2013 that 10 BCTs would be cut from 10 Army installations, including one at Fort Drum. (Teddy Wade/U.S. Army)

WASHINGTON — The Army on Tuesday announced major force structure cuts that will drop the number of brigade combat teams from 45 to 33, saying further shrinkage of the federal defense budget would require even deeper cuts and further lessen the Army’s combat power.

The Army previously announced it would reduce its end-strength from its current level of 541,000 to 490,000 soldiers by the end of fiscal 2017 under the $487 billion of spending reductions mandated by the 2011 Budget Control Act, but until Tuesday had only announced it was cutting two brigades in Europe. The Army reached a wartime high of 570,000 soldiers, after having some 482,000 soldiers in 2001.

Army Chief of Staff Gen. Ray Odierno said Tuesday that another 10 BCTs would be inactivated. Meanwhile, the number of maneuver battalions per brigade would be increased to three from the current two, and each brigade would be assigned more engineers.

By reducing the number of headquarters and increasing the number of battalions per brigade, Odierno said the Army is “increasing our tooth to tail ratio.” He added that while there would be some civilian job losses, many civilian positions are in place to support the basic functions of a post, and won’t be affected.

An eleventh BCT in a location still undecided will be cut in the future, Odierno said.

The Army was working early Tuesday to notify Congress of the planned cuts, an Army official told Stars and Stripes.

The brigade cuts were made after thousands of hours of planning, including simulated combat and interviews with installation personnel, Odierno said. The final selections were based on diverse factors including proper geographic placement of forces, cost and local economic impacts, Odierno said.

The cuts are likely the first round for the Army. They don’t take into consideration the across-the-board spending cuts known as the sequester, which are set to reduce military spending by an additional $500 billion by 2022.

Officials said if the sequester remains in place or isn’t modified by Congress, the Army will need to consider further, deeper cuts to its force structure that could reduce the number of soldiers to well below 490,000.

Following the announcement, Odierno will visit some of the Army bases hardest hit by the cuts, officials said.

What's coming from where?

To meet new budget realities, the Army says it will cut one brigade combat team at each of 10 stateside bases: