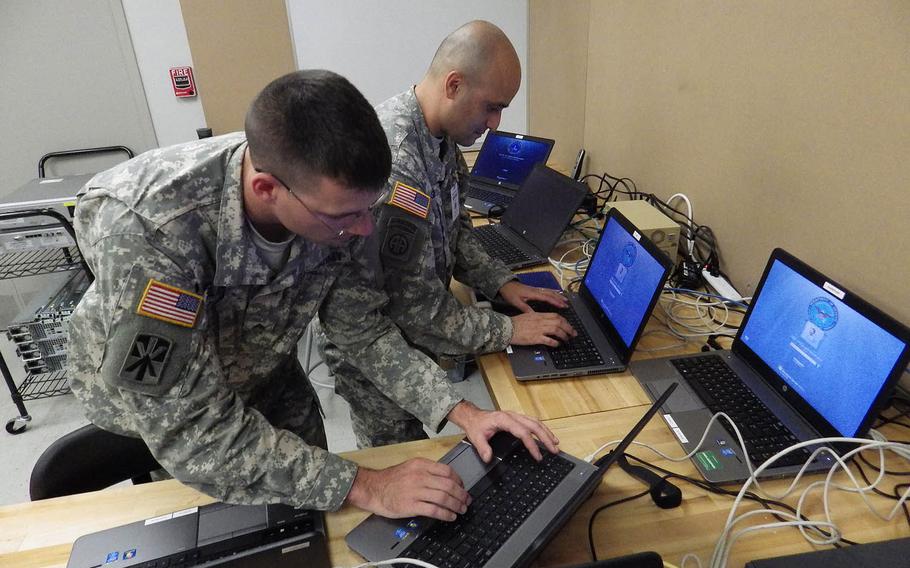 Soldiers with the 25th Infantry Division test system solutions in the Capability Development Integration Directorate cyber battle lab Aug. 19, 2015, at the U.S. Cyber Center of Excellence at Fort Gordon, Ga. The Hawaii-based soldiers took part in a two-week program to develop cyber capabilities for the 25th. (Courtesy of the U.S. Army)

Soldiers with the 25th Infantry Division test system solutions in the Capability Development Integration Directorate cyber battle lab Aug. 19, 2015, at the U.S. Cyber Center of Excellence at Fort Gordon, Ga. The Hawaii-based soldiers took part in a two-week program to develop cyber capabilities for the 25th. (Courtesy of the U.S. Army) 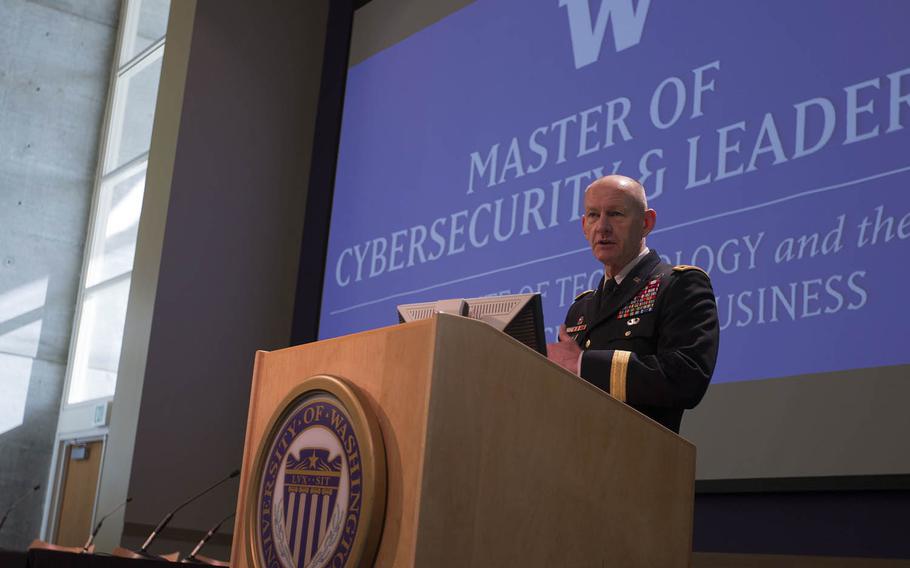 Lt. Gen. Edward C. Cardon, commander of U.S Army Cyber Command, addresses government, business and education cyber professionals May 5, 2015, at the Northwest Cybersecurity Symposium at the University of Washington-Tacoma, Wash. Cardon was a keynote speaker at the event designed to bring industry and government together to discuss safeguarding the nation's infrastructure and network systems. (Courtesy of the U.S. Army) 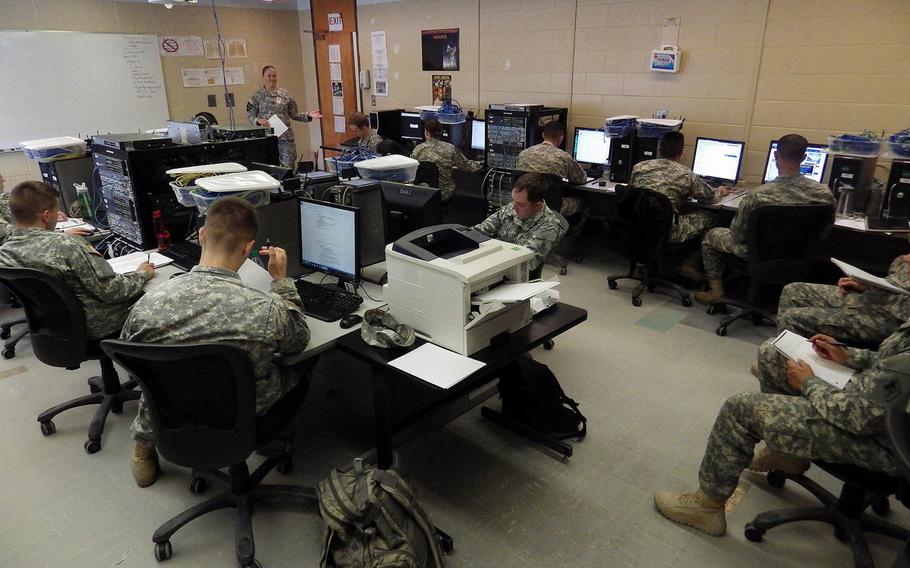 Students review lessons with an instuctor during the Army's first Cyber Basic Officer Leader Course Aug. 18, 2015, at the U.S. Cyber Center of Excellence at Fort Gordon, Ga. The students, newly commissioned second lieutenants, will become the Army's first cyber operations officers upon completion of the U.S. Army Cyber School program. The 37-week class, the Army's longest officer training program, will provide the young officers with the core leadership training provided all Army officers, as well as the technical skills and certifications needed to take on positions across the Army's cyber force. (Courtesy of the U.S. Army) 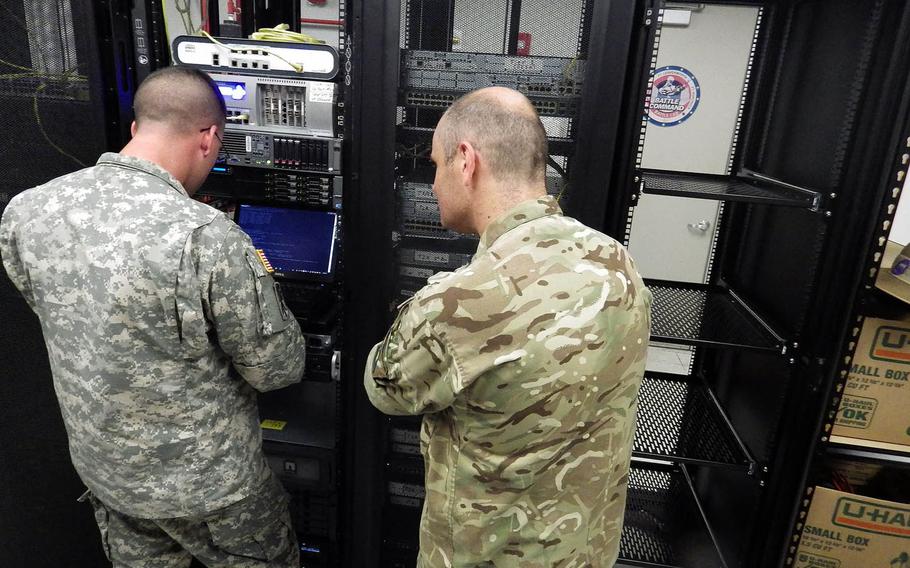 A soldier, left, with the 25th Infantry Division and an exchange officer with Britain's Royal Corps of Signals test system solutions in the Capability Development Integration Directorate cyber battle lab Aug. 19, 2015, at the U.S. Cyber Center of Excellence at Fort Gordon, Ga. (Courtesy of the U.S. Army) 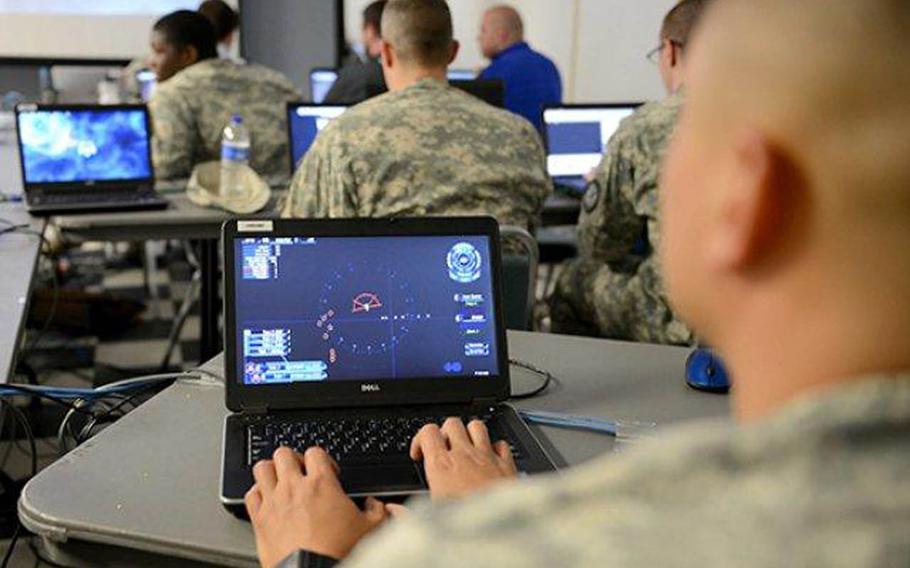 A soldier with the 780th Military Intelligence Brigade assesses weapons systems for Team Kobayashi Maru May 19, 2015, during the 780th's Cyber Development and Mentorship exercise at Fort George G. Meade, Md. The unclassified force-on-force exercise based on a modified video game simulation gave soldiers an opportunity to develop cyber skills while operating alongside their civilian and sister service colleagues. (Courtesy of the U.S. Army)

YOKOTA AIR BASE, Japan — The Army is looking for soldiers and civilians to serve in new cyber units charged with protecting critical stateside infrastructure and creating “effects” on the battlefield in support of conventional forces. The challenge: Attracting the creative, energetic talent typically drawn to the freewheeling tech sector.

Army Cyber Command has about 20 teams in place, out of the 41 that it hopes to form by the end of next year, said Command Sgt. Maj. Rodney Harris, an adviser to Army Cyber Command and its commander, Lt. Gen. Edward C. Cardon.

Recruiters are hoping to tap into some of the energy that has helped Silicon Valley lead the world in information technology. However, it’s unclear whether the Army can provide an environment compatible with the techies whose skills have made Google, Microsoft and Apple household names. A different sort of soldier will need to be recruited to fight in “a seriously nontraditional” space, said Arizona State University engineering professor Braden Allenby.

The challenge for recruiters is twofold. They need to attract skilled techies to the military, then make sure they don’t trigger an “immune response” from the more traditional military organizations they need to work with, Allenby said.

The Army has been building its cyber force since 2010, and Harris said the goal is to recruit 1,899 cyber workers – its share of 6,000 employees under the umbrella of the Defense Department’s Cyber Command.

The Army’s cyber teams are scheduled to be fully staffed by the end of next year, though it will take longer to complete training, said Capt. Micah Bushouse, who works for Army Cyber Command’s advanced concepts and technology section.

Bushouse, whose job is to ensure cyber soldiers have the funding and gear they need, has a telecommunications degree from Michigan State University and spent nine years as a signal officer before joining Army Cyber Command.

“Defending the network is a full-time job, but it’s very rewarding when it’s done correctly,” he said.

Cyberspace encompasses all of the networks and devices that hold data, Harris said.

“It is impossible to defend the entire network,” he said. “Commanders have to decide what pieces of the network are most important to them for a specific operation.”

Cyber soldiers can also go on the offensive. The “effects” they can create on the battlefield are akin to indirect fire such as artillery and mortars, Harris said.

Cyber effects can, for example, deny an adversary the ability to use their electronic command and control systems, or block them from using the Internet, said Bill Roach, an Army Cyber Command public affairs officer.

In June, cyber soldiers tested their skills alongside personnel from other branches of the military and government during Cyber Guard, an exercise that included attacks to disrupt electrical power on both U.S. coasts, said Coast Guard Rear Adm. Kevin E. Lunday, Cyber Command’s director of exercises and training.

Under the scenario, oil and gas pipelines were disrupted, and bank and Defense Department information networks were attacked. The training involved responding to power outages, ATM failures, food shortages and other situations that might occur in such an attack, including the intense media interest that would result, Lunday said.

“We’re employing the force while we’re building it,” he said. “So some of the teams that were in this exercise are still under development — (they are) still being staffed and trained.”

Lava lamps, foosball Army Cyber Command is based temporarily at Fort Belvoir, Va., along with Army Intelligence and Security Command. A permanent facility will open at Fort Gordon, Ga., in 2019, Harris said.

“When we went to design the headquarters, we sent folks to Google and Microsoft to take away some lessons about design of the workplace,” he said.

Roach said there likely won’t be free lobster or a giant dinosaur at the new cyber headquarters, and there aren’t as many exercise balls at Fort Belvoir as there were in “The Internship,” a 2013 film that lampoons Google’s work environment.

But there are plenty of white boards, said Bushouse, who understands a lot of what cyber personnel scrawl on the boards but not everything. “A lot of what goes on them is very technical,” he said.

To attract the right workforce, Army Cyber Command is still trying to figure out the best culture for its workplace.

“If we don’t acknowledge these capabilities that the civilians and even the soldiers bring to the workplace, they are going to go somewhere else where they are going to have that sort of environment,” he said.

The Army has hand-picked a seed group of skilled personnel for its cyber force, Bushouse said. The first cyber soldiers include those who asked to reclassify from other Army jobs. Some had relevant training or education before their service, while others programmed as a hobby. About half the enlisted troops assigned to Army Cyber Command transferred from the Signal Corps; others came from military intelligence. The next intake of officers will be classed specifically as cyber soldiers, Harris said.

Cyber soldiers are honing their skills in cyber, signal and electronic warfare at a new Cyber Center of Excellence being run out of a temporary facility at Fort Gordon.

“It’s a nexus of highly professional, highly technical folks,” Bushouse said. About one in five is a civilian, Harris said.

Members of National Guard and Army Reserve cyber protection teams are likely the most up to date with what’s going on in the private sector.

“We have people from Netflix, Verizon, Microsoft, Amazon,” Harris said. “If it’s a major IT company out there, there is a good chance that some of their employees, when they are drilling with the National Guard or Army Reserve, they are in our cyber force.”

Potent skills Cyber Command employees are called “operators,” not “hackers,” and job-seekers must pass extensive background checks. Those who have been involved in nefarious cyberspace activities need not apply, Harris said. Recruiters have a tough time getting candidates past the security clearance — including a polygraph test — required to join the cyber force.

“You can be the most noted white-hat hacker in Silicon Valley, but you can’t join Cyber Command if you can’t pass the clearance and polygraph,” Harris said.

Cyber Command personnel learn potent skills that can be dangerous in the wrong hands.

“Many of these technologies, including not just cyber but domains such as robotics, data analysis and data mining, biotech and biodefense, could have significant impacts if released into civil society, especially if done with criminal motives,” said Allenby, the engineering professor.

Harris spent 30 years in the infantry before becoming a cyber soldier, and he brings his own “nontechie” skills to the mission.

“When I was asked to take this job, I was concerned,” he said. “I’m not an information-technology or military-intelligence specialist.”

But his experience maneuvering troops was exactly what the new command was seeking, Harris said.

“We’re trying to develop a maneuver organization that can deliver effects in time and space just like we deliver indirect fires on the battlefield,” he said. “I bring the awareness to help the rest of the Army understand that cyber is a major capability.”

The first Army Cyber teams are working for the military’s overall Cyber Command, but pilot programs are incorporating teams in exercises at some of the Army’s field training sites as a way to show commanders the capabilities that will be available.

Americans want their Army to be the best in the world at whatever it does, and that’s the Army Cyber Command goal, Harris said.

“Regardless of skill set — in the air, on land, on sea, in space and in cyberspace — the American people expect us to be better than anyone else,” he said.