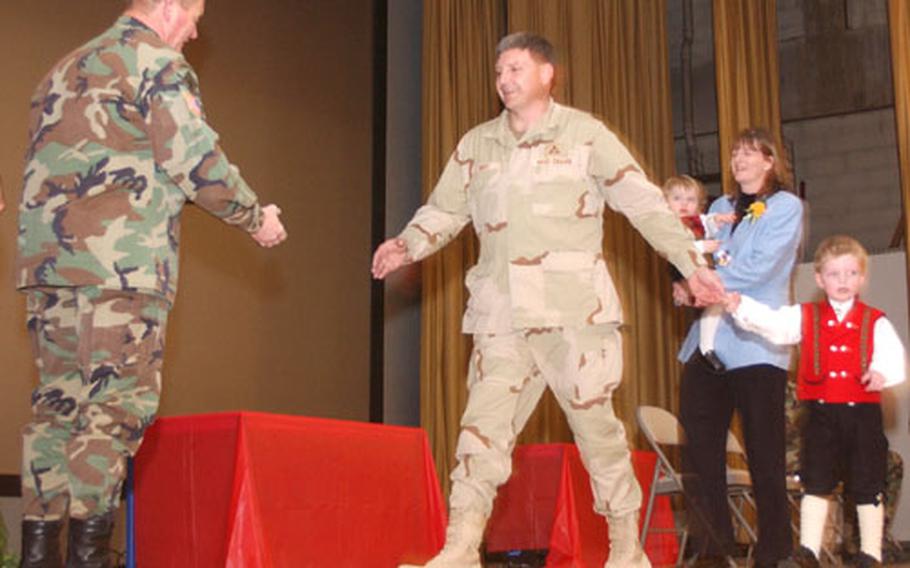 Lt. Gen. Robert B. Flowers, commanding general of the U.S. Army Corps of Engineers, left, congratulates Ron Mott and his family for his service in Iraq during a ceremony Monday in Wiesbaden, Germany. (Raymond T. Conway / S&S)

WIESBADEN, Germany &#8212; The U.S. Army Corps of Engineers, Europe District, knows that people can&#8217;t deploy to war zones without the help and support of those they leave behind.

The Koch family said they were surprised by the ceremony.

&#8220;This was unexpected,&#8221; said Teresa Koch, who gave birth to their now 9-month-old daughter, Isabella, while her husband, Jonathan, was deployed. &#8220;It was the hardest knowing that [Jonathan] was missing everything, but he still got to see her grow up by e-mail and videos.&#8221;

Jonathan Koch said the ceremony was nice because it was the first time civilians were recognized for volunteering to go downrange, as well as family members.

&#8220;This meant a whole lot. It was such a surprise and truly a blessing because it shows they really care about deployed family members,&#8221; said Biddle, whose husband is an active-duty military member deployed separately from the Corps of Engineers. &#8220;They really didn&#8217;t have to do this. I&#8217;m just their employee and it shows how thoughtful they were. It wasn&#8217;t expected at all.&#8221;

Biddle wore a yellow rose boutonniere during the ceremony provided by the U.S. Army Corps of Engineers to show she has a deployed family member.

U.S. Army Corps of Engineers volunteers from the Europe district generally go downrange in groups from six to nine people and act as technical advisers for combat engineer units.