Army Corps of Engineers general sits down with Stripes 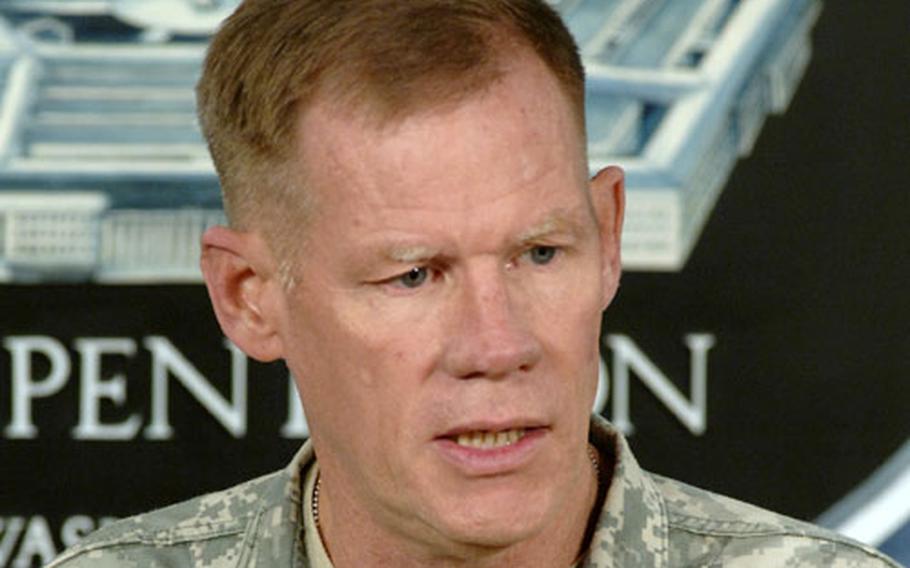 SEOUL &#8212; As commander of more than 34,000 people worldwide &#8212; mostly civilian workers &#8212; U.S. Army Corps of Engineers Lt. Gen. Carl A. Strock visited the Korean peninsula earlier this month to see how the Pacific Ocean Division is supporting all branches of the military.

He said he wanted to ensure the Corps is &#8220;doing the right kinds of things where the facilities are concerned&#8221; as U.S. Forces Korea transforms and moves troops onto a major military hub at Camp Humphreys.

The senior engineer in the Department of Defense agreed to a one-hour interview with Stars and Stripes to answer questions about the Corps&#8217; worldwide mission, vision and future.

Following are excerpts of the interview:

Q: What have you found here during your visit?

A: Well, I&#8217;m very pleased with just about everything I&#8217;ve seen here in terms of the kind of support we&#8217;re giving. Particularly gratifying is the host-nation support that the Koreans are putting forward. I don&#8217;t know where it fits in terms of the total percentage of the cost of maintaining the force over here &#8230; but I am pleased that over the years I&#8217;ve been coming here to Korea to see a very healthy contribution from the Koreans on facilities for our forces. It&#8217;s sometimes a tough environment to work across cultures, so that presents some challenges.

Q: Can you describe the Corps&#8217; main mission and role here now?

A: The future &#8230; is going to be in the Pyeongtaek area between Osan (Air Base) and (Camp) Humphreys. The challenge we have, though, is that the timing of that is uncertain. It&#8217;s tied to the acquisition of land and the preparation of the site for construction &#8230; So it&#8217;s kind of a balancing act of putting enough support into the existing installations, but in a way that we&#8217;re not making commitments of resources that could be better used for future purposes &#8230; . The Koreans would like to have a more active role in the delivery of those projects, so we just need to make sure that as we transition to a more active Korean role, that we&#8217;re able to represent the interests of the U.S. forces.

A: It&#8217;s related to a process called Lean Six Sigma, which we&#8217;re using to change how the Army does its business. At its heart, our districts are business operations. They don&#8217;t have any central funding; they&#8217;re funded by the projects they do. It&#8217;s very clear to us that with the dynamic nature of change today, we need to be more responsive, we need to be able to turn requirements into facilities a lot quicker than we do now. It&#8217;s particularly critical as you move units around that when they either return from combat or when they stand up a new brigade combat team. Obviously those facilities to house, train, care for those soldiers, they must be ready on specific dates.

Q: How will you do that?

Q: Is the recent build-to-lease program at K-16 Air Base an example of looking for new ways to work here?

A: I think a part of our business transformation is to look for more innovative acquisition methods, and (K-16) certainly falls in that category. What is attractive about build-to-lease is that we simply can&#8217;t get sufficient funding in any given year to provide a dramatic increase in family housing. So what we do &#8212; what build-to-lease does &#8212; is uses private capital to bring a lot of money to the table early and over time they get a return on their investment &#8230; It&#8217;s kind of a win-win. We get the facilities we need quickly and the Korean economy benefits in the process.

Q: What are your folks doing in Iraq and Afghanistan?

A: That is the No. 1 priority for the Corps right now &#8230; anything to do with the global war on terror, whatever we can do to support that effort. We have over time evolved our presence in both Afghanistan and Iraq, and we set up models there that are very similar to what we have here in Korea with the Far East District. We&#8217;re doing a lot of work outside of military bases in those countries on civil infrastructure.

Q: Who is deploying?

A: One of the gratifying things about that is that we rely on civilian volunteers to go do that work. We cannot compel civilians to go into combat zones. And yet they continue to volunteer and go forward. And they &#8230; experience the same hardships and challenges that our troops do. Same dangers. We&#8217;ve had over 3,000 of our civilians deploy over the last three years into those theaters of operation. We have about 34,000 people in the Corps of Engineers, in my command, and all but about 500-600 of those are civilians. And many of those are local nationals in our overseas districts. So we recognize that we&#8217;ve got to be able to pick up and go to where we&#8217;re needed.