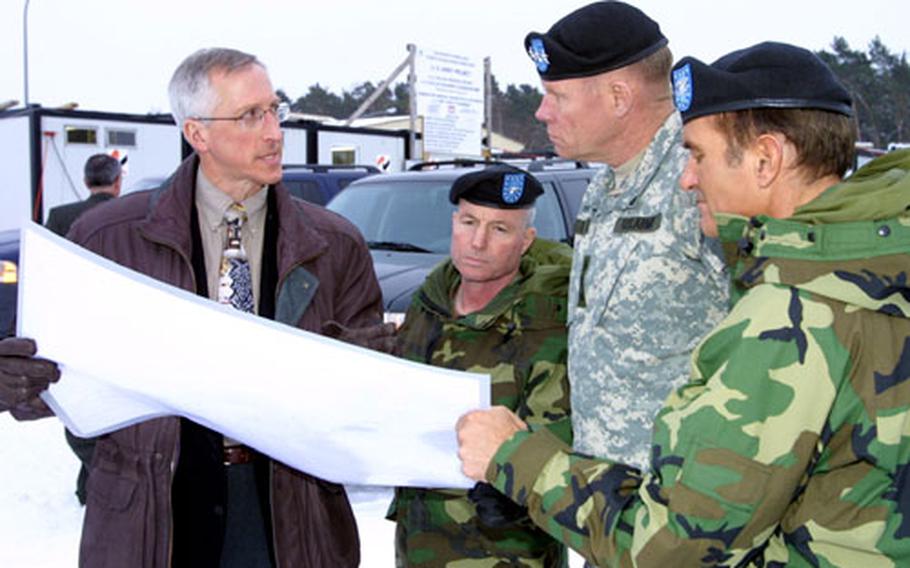 GRAFENW&#214;HR, Germany &#8212; The head of the U.S. Army Corps of Engineers visited Grafenw&#246;hr on Wednesday to take a look at construction projects that are part of Efficient Basing Grafenw&#246;hr.

Lt. Gen. Carl A. Strock, the Army&#8217;s chief of engineers, met with soldiers, civilians and local nationals involved in the project.

Efficient Basing Grafenw&#246;hr is a U.S. Army Europe initiative to consolidate the command and control of six battalion-size elements in line with the Army&#8217;s transformation plan.

The Grafenw&#246;hr project is a plan by U.S. Army Europe to bring together six battalions into one region where the soldiers will work and live.

&#8220;He got to see firsthand ... how the restructuring of the Army is going to look physically,&#8221; said Kathy Gibbs, 100th Area Support Group spokeswoman.

The EBG planners and managers went over some of the current construction projects, projects that have been completed and projects in the design phase, said Edward Argueta, program manager.

One of the completed projects is the Camp Normandy facility, which included renovations of buildings for the Noncommissioned Officers Academy classrooms and the construction of a dining facility.

&#8220;The interest there was in consolidating the training functions into one area,&#8221; Argueta said. &#8220;It is designed like a college campus that provides minimal distraction for soldiers in [NCO Academy] classes.&#8221;

Following the meeting, Strock went on a windshield tour of some of the projects and toured the new Grafenw&#246;hr Physical Fitness Center, which is about halfway complete.

He also toured the site of the future Netzaberg housing area, which will consist of about 835 built-to-lease housing units for military families, Argueta said.

Strock said the projects would lead to ideal living conditions for soldiers and families who eventually will be based at Grafenw&#246;hr.

The visit from the Army&#8217;s top engineer motivated the people who have been heavily involved in the project, Argueta said.