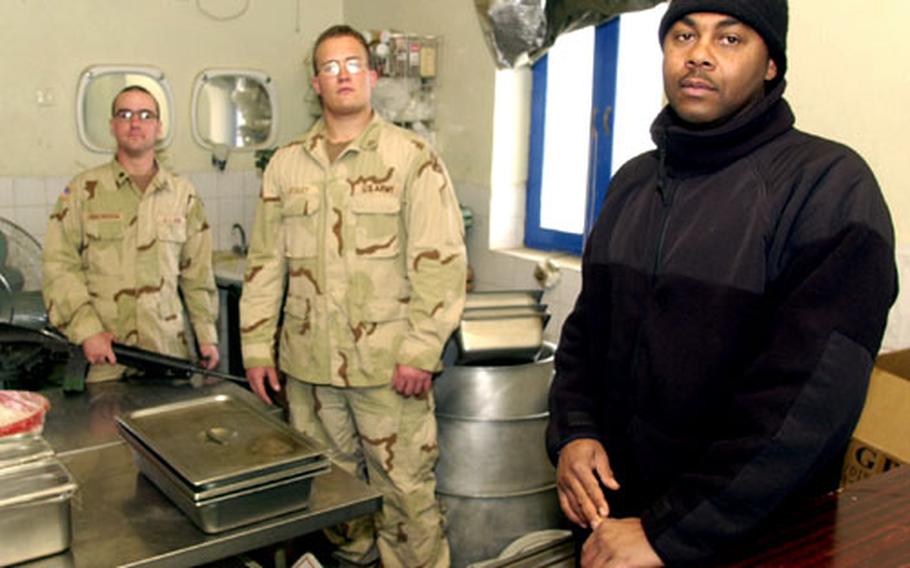 From right, Staff Sgt. Calvin Alston, Pfc. Troy Staley and Spc. Nicholas Louderbough are kings of their dining facilities, trying to make troops’ lives better with extra food and better condiments. They can give you extras if you’re nice, but command has directed the cooks to cut the fat, so Lobster Alfredo is off the menu. (Terry Boyd / S&S)

GARDEYZ, Afghanistan &#8212; At Firebase Gardeyz, 8,000 feet up in the Afghan mountains, Christmas dinner 2003 was pure shock and awe.

Pfc. Troy Staley and his crew served a company-size force a feast of Lobster Alfredo, sirloin steak and fried shrimp. Veggies and potatoes, too, said Staley, a cook with the 90th Forward Support Battalion of the Fort Drum, N.Y.-based 10th Mountain Division.

At Bagram Air Base, employees of the Dallas-based Kellogg Brown & Root serve three meals daily. At main U.S. bases in the Balkans and Iraq, various contractors bring in civilians of different nationalities to prepare food.

At the dining facility here, starting about 4:30 a.m. until late at night, it&#8217;s Staley, 21, doing the cooking with Staff Sgt. Calvin Alston, 35, the noncommissioned officer in charge of the dining facility, and Spc. Nicholas Louderbough, 26. Alston and Louderbough are both with the 3rd Battalion, 321st Field Artillery Regiment from the Fort Bragg, N.C.-based 18th Airborne Corps.

Alston, Louderbough and Staley cook for some of the world&#8217;s toughest customers: a Provincial Reconstruction Team of soldiers and civilians rebuilding Afghanistan; Army Special Forces soldiers and operators and Rangers; and CIA operatives and other covert fighters chasing &#8220;bad guys&#8221; in the surrounding mountains.

Of about a dozen diners interviewed, all said Staley, Alston and Louderbough are an important part of the mission.

What they have is mostly heat-and-eat food, Staley said. Unlike Beetle Bailey, they rarely peel a potato. Mostly, it&#8217;s just hard work, from lifting the huge pots to constant sanitation to unloading trucks every week. Food comes in modules, and a frozen module goes with two dry ones.

But the cooks can actually cook, Alston said, and sometimes do, grilling the steaks for the Sunday and holiday dinners.

In garrison, Staley and Alston said, they really enjoy using fresh ingredients to make pasta sauce, homemade biscuits and other delectables. But what they do most often is try to improve on what can be pretty predictable fare.

When soldiers didn&#8217;t like the Army ketchup, the crew figured out how to get ketchup from a supplier in Kabul, 100 miles away. When soldiers complained about tasteless eggs, the cooks found a soldier who donated Velveeta cheese to add, Staley said.

Alston makes his own seasoning blend, mixing garlic and onion powders, paprika, salt, pepper &#8220;and a whole lot of other stuff.&#8221;

Good food equals good morale, Staley said. If he had his way, it would be steak and lobster every day.

But PRT command, worried about expanding waistlines, has told him to cut back on the calories, banishing Lobster Alfredo to sweet memory for the time being.

Whatever they prepare, the work never stops, and with so few cooks in the Army, they have to cross train trigger-pullers to help them.

Though the money is good, Staley, Louderbough and Alston are adamant this isn&#8217;t a job for everyone.