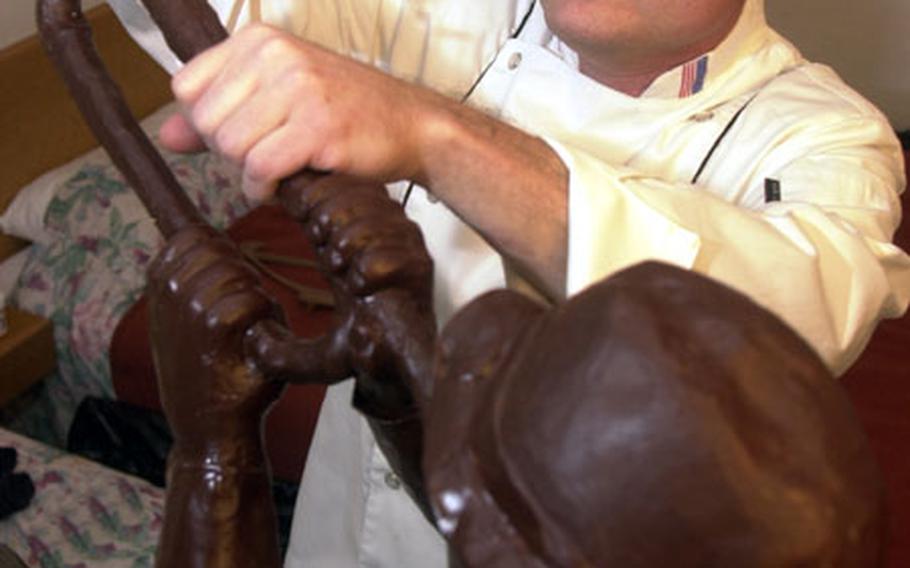 If creamed beef and biscuits are not already Jay Leno&#8217;s favorite breakfast, they may be after Sgt. 1st Class Dave Russ teaches the &#8220;Tonight Show&#8221; host how to cook the meal the Army way.

Russ, an Army chef who teaches culinary skills at Fort Bragg, N.C., is a scheduled guest Thursday on the late-night talk show. Sandra Bullock, Leno&#8217;s celebrity guest that evening, is slotted to help Russ with cooking the Army&#8217;s staple breakfast.

In 1993, Russ was the first Army Chef of the Year. During last year&#8217;s Army Forces Command Culinary Arts Competition, he was named National Military Culinary Champion. Last fall, he coached the Army team to a second-overall finish in the Culinary World Cup in Luxembourg.

When not teaching airborne troops to cook, the Desert Storm veteran is feeding an Army of his own. He&#8217;s a single parent of eight children.

This week&#8217;s appearance on the small screen is Russ&#8217;s first time on late-night programming, but it&#8217;s not the first time television called on his talents.

Plus, Bullock grew up near Russ, who hails from Stafford, Va., he said.

Russ spent Tuesday preparing fellow noncommissioned officers to cover for him during his trip to Los Angeles to tape the show. His plans called for him to leave Wednesday.