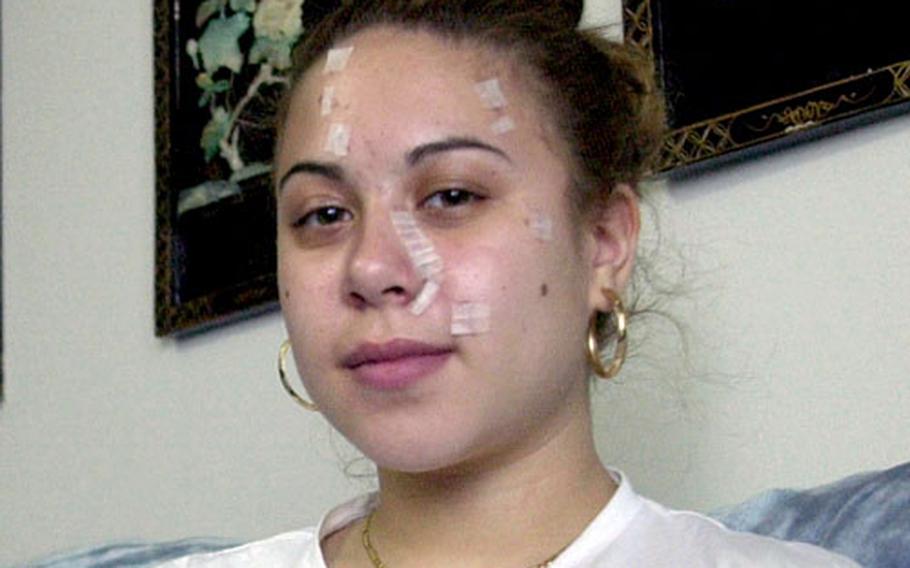 Jasmyn Chambers, 18, needed 80 stitches in her face after being attacked with a broken beer bottle outside a Seoul nightclub. Pfc. Christopher Myers is charged with aggravated assault in the incident. (Erik Slavin / S&S)

Jasmyn Chambers, 18, needed 80 stitches in her face after being attacked with a broken beer bottle outside a Seoul nightclub. Pfc. Christopher Myers is charged with aggravated assault in the incident. (Erik Slavin / S&S) 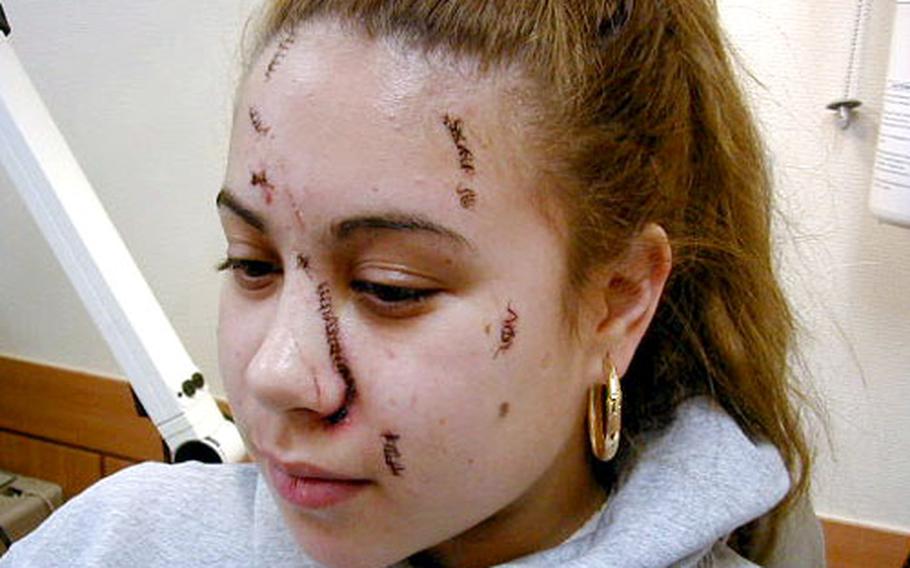 Jasmyn Chambers, 18, in a photo taken Feb. 25 at the hospital, hours after she was attacked with a broken beer bottle. Chambers could face administrative action for retaliating against her attacker. (Courtesy of Jim Chambers)

YONGSAN GARRISON, South Korea &#8212; The first thing Jasmyn Chambers, 18, remembers from early morning Feb. 25 isn&#8217;t the pain of a jagged beer bottle slicing through her face. What struck her first was bewilderment.

She still has trouble understanding why a soldier, or any man, would slash a woman&#8217;s face so badly she would need 80 stitches.

The accused soldier, Pfc. Christopher Myers, 20, of the 435th Medical Detachment at Camp Humphreys, is charged with multiple offenses including aggravated assault and underage drinking.

But Jasmyn&#8217;s troubles don&#8217;t stop with the slashing, or the persistent nightmares and anxiety her father says she suffers. She&#8217;ll need further surgery to minimize scarring, although some scarring likely is permanent, cosmetic surgeons have told the family.

And the Army is considering &#8220;administrative action&#8221; against Chambers with a possible maximum penalty that in effect would force her to leave South Korea.

An Area II administrative action letter accuses Jasmyn of assault. She received the letter because she admitted kicking and scratching her assailant while trying to stop him from fleeing as she bled.

Military officials say they empathize with her but must comply with the rules.

The Hongdae sceneIt was about 4:30 a.m. when Defense Department contractor Jim Chambers and his wife called their daughter. &#8220;She was supposed to be home by 12,&#8221; he said.

But Jasmyn and a friend had gone to a popular monthly club event in Hongdae neighborhood &#8212; an area off-limits to servicemembers. She said when they left Stompers nightclub, a man with whom the friend had been playing pool followed, demanding $40. Jasmyn declined to name her friend for fear she would be punished.

Jasmine said a man &#8212; whom she identified as Myer &#8212; holding a beer bottle began pushing the two to fight. Jasmyn said she feared he would become violent and asked him for the bottle.

She said the man drew an imaginary line and told her if she crossed it he&#8217;d hit her with the bottle.

Jasmyn said she persisted and the man smashed the bottle and followed through with his threat, slashing a two-inch gash through her nose down to the bone. Jagged fragments cut her cheek, lips, chin and forehead.

Jasmyn, who is 5-foot-1, said when her assailant tried to leave in a taxi, she and her friend pulled him from the car. She said she doesn&#8217;t remember exactly what happened but admits it&#8217;s possible she kicked and scratched the man.

Some of the onlookers began beating the man, Jasmyn said, and bouncers gave her his identification card. She was in a taxi bound for the Army&#8217;s 121st General Hospital when her cell phone rang.

It was her father.

The aftermathChambers said he spent more than three hours with his daughter at the hospital clinic, where they first met 8th Military Police Investigator Stanley Nabors.

The father said while his daughter was being treated, Nabors began asking her questions including whether she had been drinking.

&#8220;He badgered my daughter in the emergency room,&#8221; Chambers said. &#8220;He kept attempting to interview her between nurses and other emergency room personnel trying to ... dress her wounds.&#8221;

Multiple attempts over more than a week to reach Nabors through USFK for comment were declined. Jasmyn declined to discuss whether she&#8217;d been drinking alcohol that night.

Her family said she still was medicated with painkillers on Feb. 28 when she met Nabors again to give a statement.

Her father said he asked to accompany her but the investigator &#8220;told me I had no need to worry, as she was the victim and he was only taking her statement as the victim of this incident.&#8221;

Jasmyn said she spent about 10 minutes telling what had happened when Nabors asked if she&#8217;d hit the man who slashed her that night. She said she thought so.

She said she then was read her rights and informed that her actions were considered assault.

As a civilian, Jasmyn cannot be charged under the Uniform Code of Military Justice. But as someone covered by the status of forces agreement, she is subject to administrative action. An official document Nabors gave her Feb. 28 explains that &#8220;administrative actions range from a warning letter, restriction, community service, termination of government quarters to debarment of Area II.&#8221;

She since has sent a response to the letter.

Her father said, &#8220;It is hard to imagine any possible scenario where my daughter, with her face gushing blood &#8230; and then in a total panic about her injuries, could have done anything to this guy that was not justified under the circumstances.&#8221;

USFK spokeswoman Lt. Col. Carol Schmidt wrote, &#8220;These matters are always troubling, especially when serious injuries are sustained.&#8221; However, she wrote, &#8220;we are confident that the investigator and PMO senior administrative staff conducted a thorough review of the facts before recording the assigned charges.&#8221;

Schmidt said Myers faces charges of violating curfew, underage drinking and aggravated assault. Since being detained Feb. 25, he&#8217;s been returned to his unit.

Chambers said he and his daughter also will ask South Korean authorities to charge Myers.