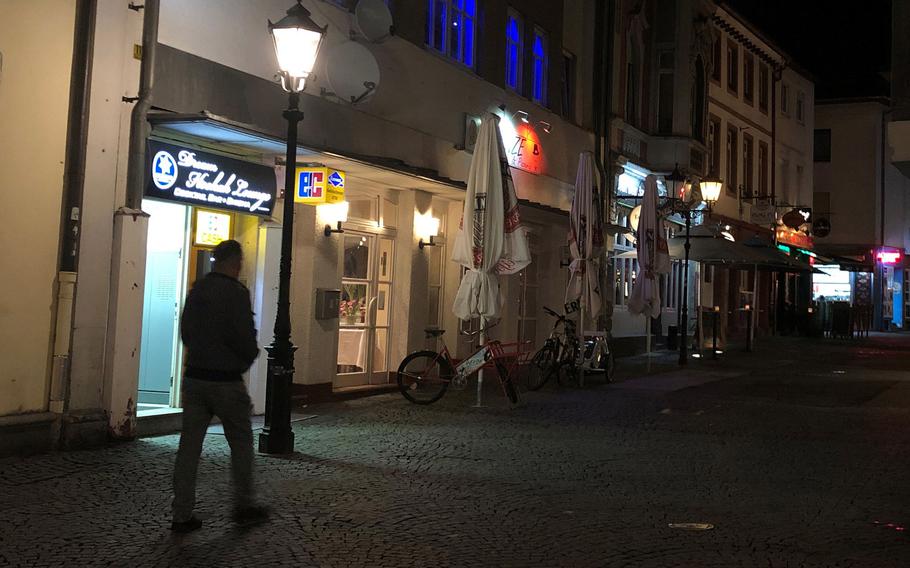 An individual walks by businesses in the pedestrian zone in Kaiserslautern, Germany at night. Maj. Gen. Christopher O. Mohan, commander of the Kaiserslautern-based 21st Theater Sustainment Command, on Monday, March 23, 2020 imposed a 10 p.m. to 5 a.m. curfew on soldiers, civilians, family members and contractors, as part of the effort to contain the coronavirus. (Chad Garland/Stars and Stripes)

An individual walks by businesses in the pedestrian zone in Kaiserslautern, Germany at night. Maj. Gen. Christopher O. Mohan, commander of the Kaiserslautern-based 21st Theater Sustainment Command, on Monday, March 23, 2020 imposed a 10 p.m. to 5 a.m. curfew on soldiers, civilians, family members and contractors, as part of the effort to contain the coronavirus. (Chad Garland/Stars and Stripes) 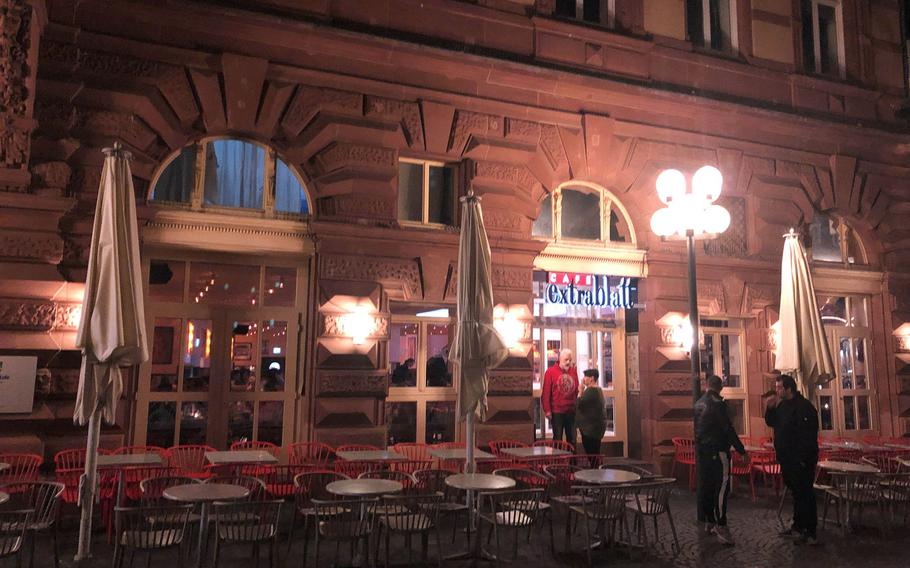 Only a handful of customers are seen outside a popular cafe in the pedestrian zone in Kaiserslautern, Germany at night. (Chad Garland/Stars and Stripes) 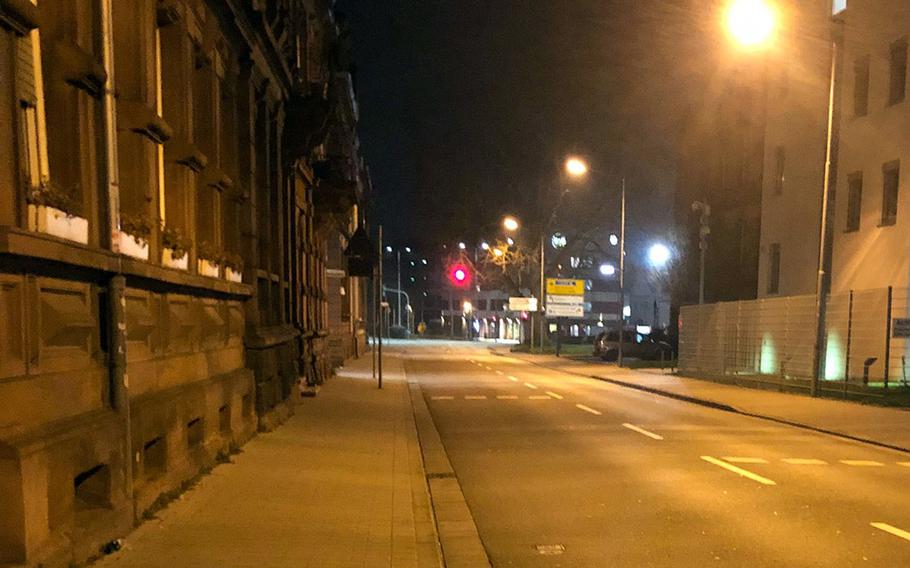 Logenstrasse near the soccer stadium and train station in Kaiserslautern, Germany, stands empty about 9:45 p.m. Friday, March 20, 2020. The Kaiserslautern-based 21st Theater Sustainment Command has placed a 10 p.m. to 5 a.m. curfew on personnel and family members. (Karin Zeitvogel/Stars and Stripes) 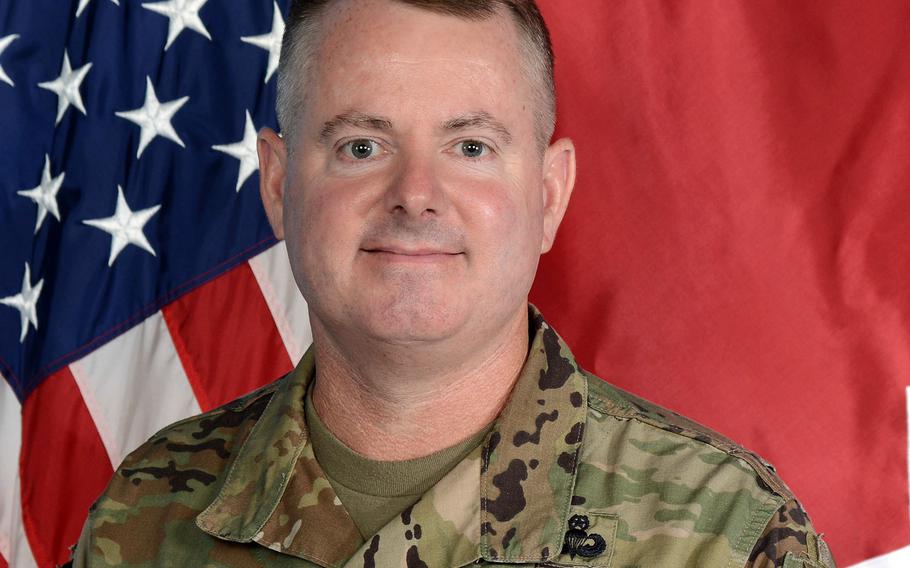 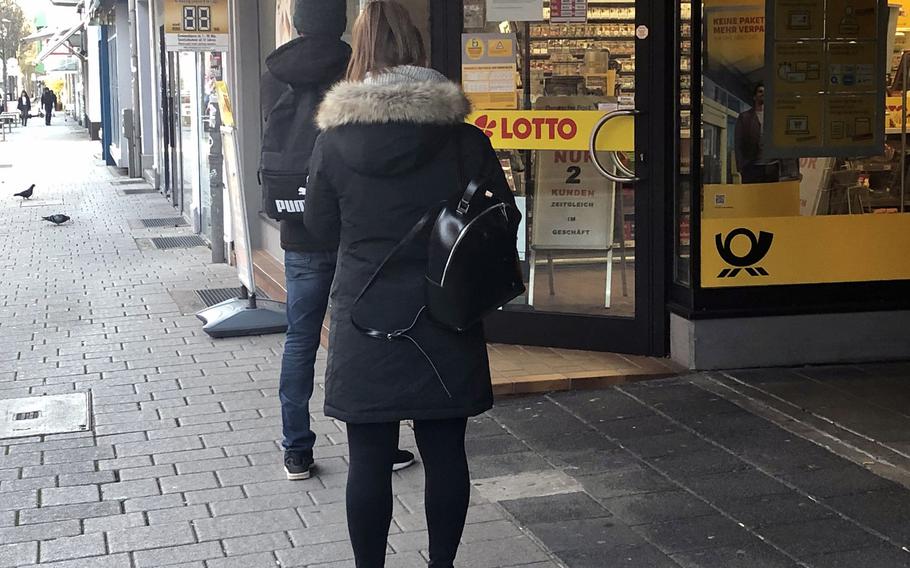 Two people stand about a meter apart as they wait to go into a shop in Kaiserslautern, Germany, on Monday, March 23, 2020. A sign inside the shop says only two customers can be inside at any given time, reflecting tougher social distancing rules announced a day earlier by Chancellor Angela Merkel. (Karin Zeitvogel/Stars and Stripes)

KAISERSLAUTERN, Germany — One of the largest U.S. Army commands in Europe has placed thousands of soldiers, family members, civilians and contractors within its area of responsibility under a 10 p.m.-to-5 a.m. curfew in an effort to contain the spread of the coronavirus.

The curfew, believed to be the first imposed on defense personnel and their families in Europe because of the pandemic, was included in a general order signed Monday by Maj. Gen. Christopher O. Mohan, commander of the Kaiserslautern-based 21st Theater Sustainment Command.

“Here’s the bottom line,” Mohan said in a video announcing the curfew and other, tighter restrictions. “If you’re not at work, at a doctor’s appointment, picking up groceries, getting gas or picking up food from some limited takeout facilities, you need to be at home. From 2200 to 0500, we need you either at work or at home.”

People can go out at night for three reasons only — official travel, medical emergencies and pet care, Mohan said.

Troops found violating the order could face administrative action or punishment under the Uniform Code of Military Justice, the order said.

Those who don’t fall under the UCMJ who violate the order could lose logistical support and access to government housing, be banned from entering U.S. installations or be ordered to return to the U.S., the order said.

The order also bars soldiers living on and off base from traveling more than 30 kilometers, or 18.6 miles, from their residences unless they’re going to work or to another military installation, a grocery store, a medical appointment, a pharmacy or a bank, picking up takeout food, doing laundry or maintaining or fueling a vehicle.

Outdoor exercise is authorized within the same 30-kilometer radius outside curfew hours, as long as it is conducted away from areas with a lot of people and either alone or with household members.

Soldiers living in barracks must “generally remain in their room or shared barracks suite,” but may leave “for the same reasons, to go to the same places” — grocery stores, banks and the like, it said.

Only the residents may be inside a barracks room or suite, and social distancing must be observed in communal areas, it said.

Laundry machines must be sanitized by soldiers after each use. Block parties are out, the order said.

Extra patrols on base or in neighborhoods won’t be called on to enforce the general order, said Master Sgt. Dan Bailey, a 21st TSC spokesman, but if “you were to get caught and something were to occur, you could be held accountable.

“We expect our personnel to do what’s right,” he said. “This is about trying to protect our people, keep them safe and healthy … and ultimately, we’ll hopefully flatten the curve.”

Other commanders in Europe have issued similar general orders, but none, either in the Army or the Air Force, have included curfews.

“This new order is not something that I like doing,” Mohan said in the video message, in which he outlined the “cold, hard facts” that prompted the order.

“We’re working hard to fight this virus. The key to fighting this virus, though, is to maintain … strict discipline and social distancing.”

Mohan’s order follows new restrictions announced by German Chancellor Angela Merkel on Sunday to fight the coronavirus, including limiting public gatherings to two people unless they are part of the same household, and the closure of nonessential services such as libraries, barber shops and beauty salons.

Shortly after she announced the tougher restrictions, Merkel quarantined herself after learning that one of her doctors had tested positive for the virus.