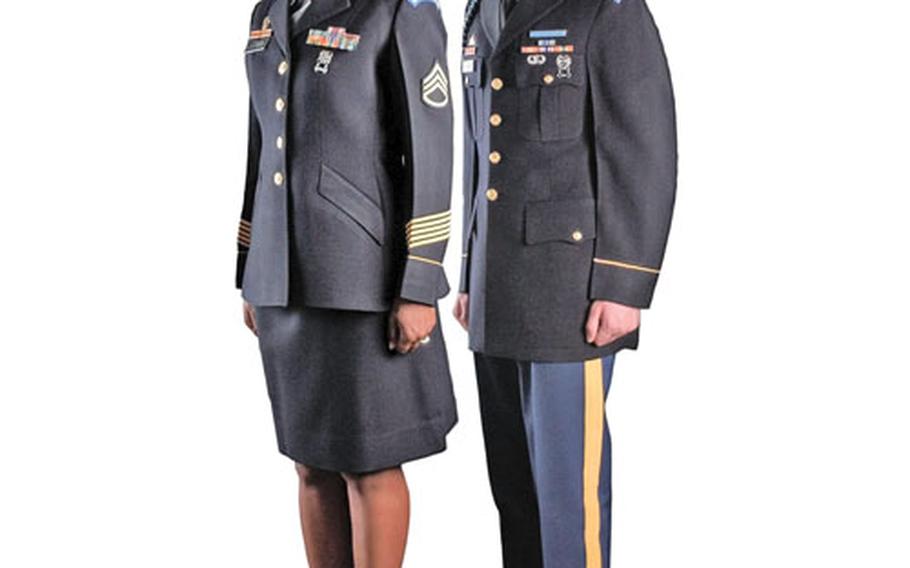 The new “Army Service Uniform” is virtually identical to the current “dress blue” uniform, but will be the sole uniform for dress wear. (Courtesy of U.S. Army)

The new uniform, mandatory by the end of 2011, will do double duty, according to Lt. Col. Carl Ey, an Army spokesman.

First, the uniform, which is virtually identical to the current &#8220;dress blue&#8221; uniform, will be the Army&#8217;s sole standard for dress wear, replacing the dress whites that soldiers are authorized to wear in tropical climates.

Last year, Army Chief of Staff Gen. Peter Schoomaker tasked Sgt. Maj. of the Army Kenneth Preston and other leaders to look into the possibility of eliminating one or more of the uniforms soldiers wear when they are not dressed for the field.

One major concern was reducing cost to soldiers &#8212; &#8220;the tremendous amount of money it takes for a soldier to sew things on uniforms, launder uniforms, press them and all this stuff.&#8221;

Schoomaker&#8217;s resulting decision was to cut two uniforms completely, while making minimal changes to the uniform he decided to keep.

The jacket and pants are the same: a very dark, almost black-blue top over a lighter blue bottom (the women&#8217;s skirt matches the jacket in both the current and the new uniform).

U.S. Army soldiers first began to wear blue in their dress uniforms in the Continental Army of 1779.

The U.S. Army tradition of wearing two different shades of blue in the jacket and pants, meanwhile, comes from the days of the Army cavalry, Ey said.

&#8220;When soldiers would break to make camp, they would take off their jackets so they wouldn&#8217;t get them dirty&#8221; as the troops went about the work of setting up their canvas tents, building fires, and taking care of their mounts, he said. &#8220;Because the pants got worn more than the tops, the pants would fade in the sunlight.&#8221;

But there are some differences between the old dress blue uniform and the new service uniform:

The service blue uniform has two shirts: a white shirt for formal occasions, and a grey herringbone shirt for day-to-day work. Both come in versions tailored for women.All soldiers in the rank of corporal and above will have a vertical gold braid sewn on the outside seam of each trouser leg. Currently, only officers wear the braid.Patches of any kind, such as unit patches, will no longer be worn on the jacket.Women will be issued optional slacks, as well as a skirt. Currently, women can wear optional slacks with the Class A greens but not with the dress blues.The changes are designed so soldiers who already own the dress blue uniform can modify it and purchase the additional accessories, Ey said.

The new service blue uniform is scheduled to be in Clothing Sales stores by the end of 2007, Ey said.

Prices have not yet been determined, in part because the Army hasn&#8217;t hired a contractor to begin making the uniforms, he said.

Enlisted soldiers will get an initial issue of the service uniform instead of the Class A greens beginning in the first quarter of 2009, Ey said.