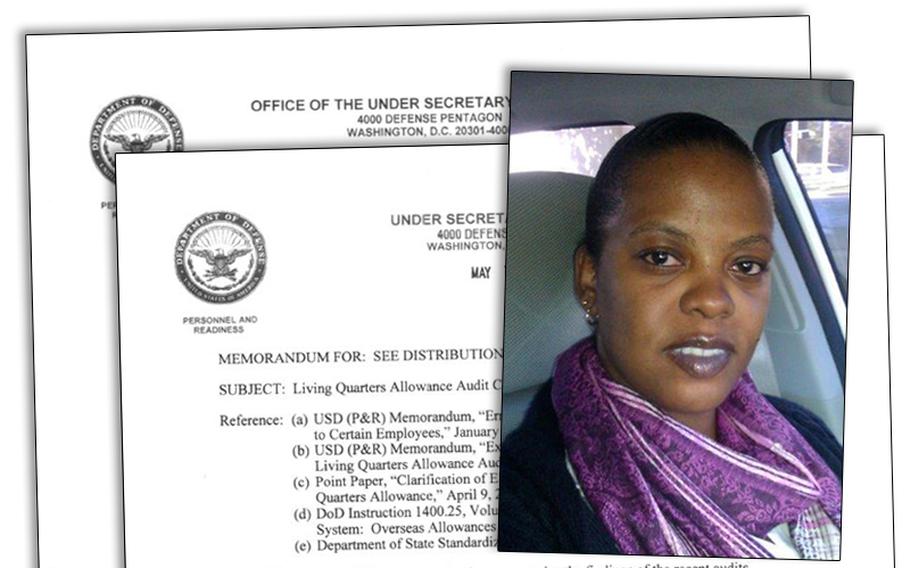 KAISERSLAUTERN, Germany — Brooke Hamilton will get her housing allowance after all.

Soon after arriving in Germany to start a new job in July, the network administrator was told by Army officials that she didn’t qualify for a living quarters allowance initially offered in her pay-and-benefits package. The allowance, which can top $40,000 a year to cover the costs of rent and utilities, was one of the primary incentives that led her to take the job in the first place.

But on Wednesday, she got a memo telling her she does qualify for the allowance after all, and that she’ll be reimbursed for some other expenses she incurred as a result of her move to Germany.

The decision effectively reverses the earlier reversal, putting Hamilton back in the position she was when she accepted the job in the spring.

After two months of fretting over whether she’d get the allowance or wind up returning to the U.S., Hamilton said she was less relieved than exhausted.

The last two months, she said, were “a nightmare.”

In the memo notifying Hamilton that she’d get LQA, Sally Smoot, the deputy director of the Army’s Civilian Human Resource Agency’s Europe region, wrote that the “decision is based on a recent policy advisory … regarding the application of the ‘U.S. Hire’ definition” in a Defense Department personnel management instruction. The advisory came from an agency within the office of the secretary of defense.

Smoot, reached by phone Thursday, said her office doesn’t yet have the policy advisory, but was working with the Department of the Army, which is preparing a formal notification that will go out to commands describing the interpretation that resulted in Hamilton’s LQA being restored.

The earlier decision to deny Hamilton’s LQA was based on the fact she was in Afghanistan working as a contractor for the U.S. military when she applied for the job in Germany.

That, officials said when queried about Hamilton’s case in August, meant that she was not a U.S. hire, according to the Department of Defense Instruction that governs civilian personnel policy.

According to that instruction, a U.S. hire is: “A person who physically resided permanently in the United States or the Commonwealth of the Northern Mariana Islands from the time he or she applied for employment until and including the date he or she accepted a formal offer of employment.”

The recent policy advisory that now led officials to re-authorize Hamilton’s LQA elaborates on that definition.

According to the memo given to Hamilton, the policy advisory “specifically states: Temporary absences from the U.S. for reasons such as vacations, temporary duty assignments (including the private industry equivalent) or deployments by Reservists and National Guard members do not alter a person’s ‘U.S. hire’ status” as it’s defined in the DOD instruction. “The phrase ‘physically resided permanently in the United States’ does not preclude anyone who temporarily left the U.S. for the reasons listed above from being eligible to receive LQA.”

Hamilton was in Afghanistan on what amounted to the private-industry version of temporary duty.

Because of that, Smoot wrote in the memo to Hamilton that “we will be able to authorize Living Quarters Allowance and also reimburse you for the initial TQSA expenditures you had incurred.”

Hamilton estimates she’s racked up roughly $10,000 in hotel and food bills since arriving in Grafenwöhr.

On Wednesday, officials resubmitted the paperwork for about $6,000 worth of those expenses that were earlier denied. On Wednesday evening, Hamilton was reached by phone while driving to find a new place to live.

The policy advisory that authorized her LQA, she said, could affect others.

“So everyone’s interested to see exactly how” it’s written, she said.