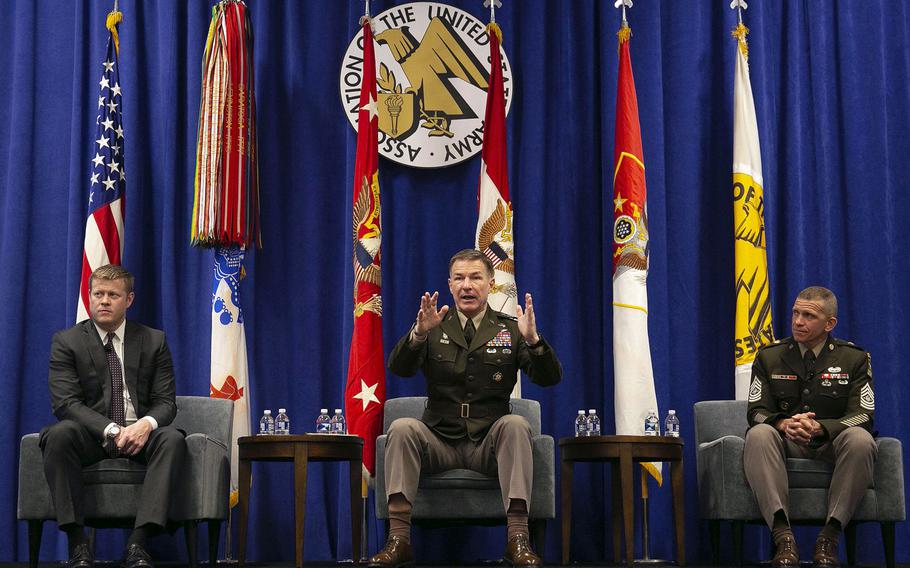 For years, the military has generally struggled to manage permanent change-of-station moving seasons, which peak during the summertime when school is out. McConville said the Army is reviewing how it handles moves and suggested that longer tours could be part of the solution.

“Part of the future that we see in the talent management system is we do look at preferences … where you want to go and what you want to do,” McConville said. “If we can accommodate that (longer tours), why shouldn’t we?”

The Army’s current approach — where most soldiers move every three years — was the product of an “industrial age” personnel management system, he said.

The idea of spreading moves around rather than concentrating them in the summer has been looked at and rejected, McConville said.

“I don’t sign up for that,” McConville said. “I sign up for making less moves or stabilizing people longer, but we’re not going to have the soldier moving in March and the kids getting pulled out of school.”

The proposed change to the length of tours was welcomed by some servicemembers with families, including Sgt. Franklin Santana, a truck driver with the Army’s 2nd Cavalry Regiment in Vilseck, Germany.

“I think staying in one place for more than three years would benefit my family,” said Santana, who recently became a father.

Moving every three years puts added stress on soldiers with families and doesn’t allow them to establish roots where they live, he said.

Others said the appeal of a longer tour length would depend on the situation. Being in a place a soldier doesn’t necessarily want to be would be an inconvenience, said Spc. Brian Firmino, a single soldier and 2nd Cavalry Regiment mechanic.

McConville’s comments were made as the Army moves forward with a plan to build a new talent management system that will overhaul how jobs are assigned.

The goal is to better match a soldier’s skills with the service’s requirements, but the system will also log when a soldier wants to remain at a location for an extended period.

The Army has already begun to experiment with slightly longer deployments for single soldiers. In June, single-soldier tours in Europe and Japan increased from two to three years in a move designed to save money and reduce unit turnover.

Improving how moves are handled is one part of a new Army strategy that aims to improve quality of life for servicemembers and their families. The strategy also prioritizes improvements to housing, child care access, spouse employment and health care.

Changing how often Army families have to PCS would also seek to relieve pressure on the Army’s overwhelmed logistical network, which has frustrated military families and resulted in long waits for household goods shipments.

Stars and Stripes reporter Martin Egnash contributed to this report from Grafenwoehr, Germany.