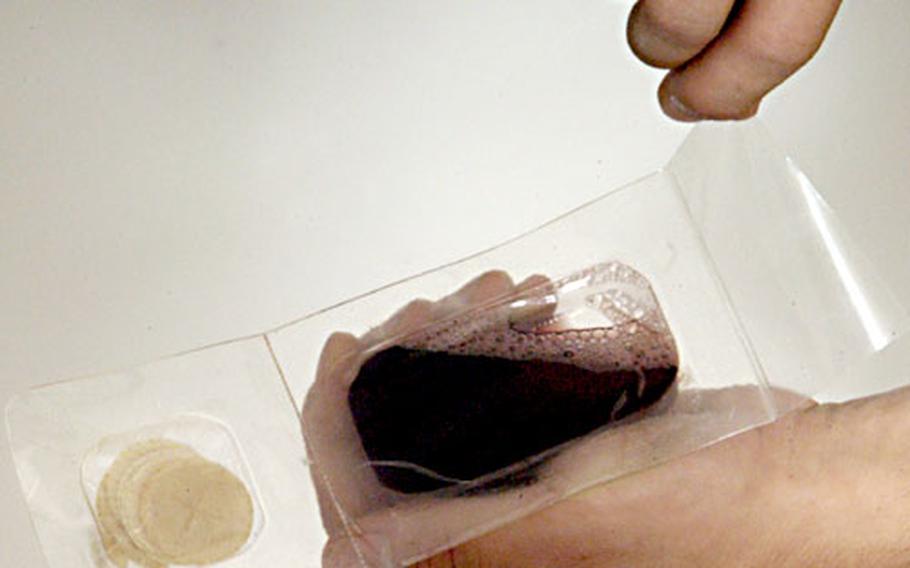 The Small Group Sacramental Packet is the Chaplain Corps&#8217; latest effort to bring spiritual aid to U.S. troops in the field, according to Chaplain John Wheatley, an Army major who with the Research Development and Engineering Command in the U.S. Army Soldier System Center &#8212; Natick, in Massachusetts.

The packets contain the two elements necessary for the communion ceremony: unleavened bread, or &#8220;the Host,&#8221; and either wine or grape juice.

The grape juice is included because some Protestants eschew alcohol, not because U.S. military chaplains are prohibited from bringing wine into Muslim countries, Wheatley said.

The pack is a divided plastic container, sealed with a peel-back plastic sheet.

One section holds about eight Communion wafers, and the other, either a few tablespoons of white wine, or the same amount of juice &#8212; just enough holy liquid to provide a tiny sip for eight communicants.

A single pack is small and flexible enough to easily fit into the cargo pocket of a uniform pants or blouse. When it&#8217;s time for a service, all a chaplain needs to do is to carefully peel off the top of the package, and the sacraments are ready to serve, Wheatley said.

&#8220;No matter where a chaplain and his troops may be, under any conditions,&#8221; they can observe a Communion Mass, he said.

Based on comments they have received from showing the military religious community the prototype communion packet, the ChaplainCorps is now preparing to settle on a version that will then go into field trials &#8220;as soon as possible,&#8221; Wheatley said.

Once enough samples have been manufactured, they will be distributed to chaplains working in &#8220;both training environments and in real-world deployment settings,&#8221; so the testers can see whether the &#8220;technology and packing concepts support the chaplains&#8217; requirements,&#8221; Wheatley said.

In addition to the communion packs, the Chaplain Corps is also developing new &#8220;Soldier Spiritual Readiness Packets&#8221; that are standardized for Protestant, Roman Catholic, Judaism, Islam &#8220;and possibly other faith groups as needed,&#8221; Wheatley said.

Each unit comes packaged in a small waterproof, resealable tan plastic sack that can fit in a trouser cargo pocket, allowing &#8220;the individual Soldier to keep and protect those religious items they use to sustain their spiritual lives,&#8221; Wheatley said.

Both the Roman Catholic and Protestant packs include Bibles and a small crucifix that can be worn on dog tags, as well as booklets with appropriate prayers for each. The Catholic packages also include a rosary.

The Muslim package has a Koran, a kufi, or prayer cap made of white or black cloth as proscribed in the Koran, and a small portable prayer rug.

The Jewish package has a Jewish prayer book and a yarmulke, or skullcap, made of desert or woodland camouflage material (Jewish law doesn&#8217;t mandate a particular fabric for the yarmulke).

The Chaplain Corps has yet to set a schedule to begin handing out the packages, but when they become available, the items will be distributed at the request of the soldier, and by chaplains in both training and deployment settings, Wheatley said.