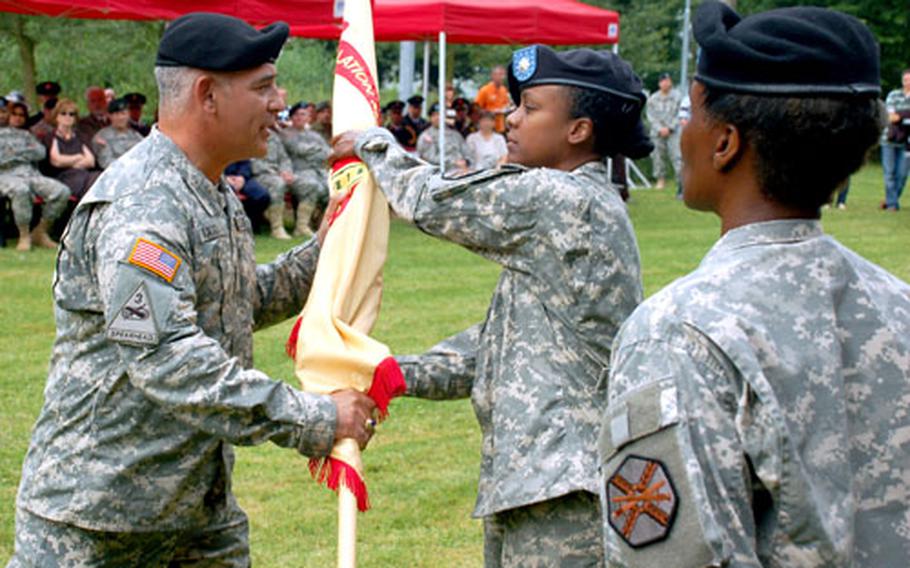 Col. James P. Drago, commander of U.S. Army Garrison Benelux, passes the colors to Lt. Col. Fern O. Sumpter, the incoming Schinnen, Netherlands, garrison commander, during a ceremony in June. At right, with back to the camera, is Command Sgt. Major Mary Brown, who assumed her post in May. (Photos courtesy of Tom Budzyna / U.S. Army Garrison Schinnen)

Col. James P. Drago, commander of U.S. Army Garrison Benelux, passes the colors to Lt. Col. Fern O. Sumpter, the incoming Schinnen, Netherlands, garrison commander, during a ceremony in June. At right, with back to the camera, is Command Sgt. Major Mary Brown, who assumed her post in May. (Photos courtesy of Tom Budzyna / U.S. Army Garrison Schinnen) 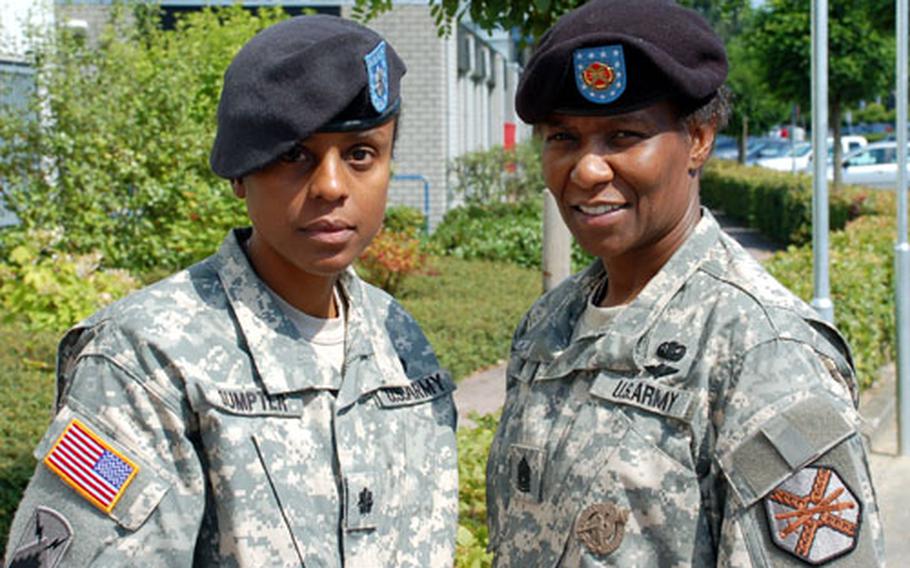 She has friends in the civilian world, and while some work for companies that promote people on merit, others say their bosses pay lip service to the idea.

"I have never once felt like I needed to be defensive [because of race or gender], or that no one was going to listen to what I said," said Army Lt. Col. Fern O. Sumpter, commander of U.S. Army Garrison Schinnen, Netherlands.

Sumpter has President Truman and her predecessors in uniform to thank.

Sixty years ago Saturday, Truman signed an executive order stipulating that "there shall be equality of treatment and opportunity for all persons in the armed services without regard to race, color, religion or national origin."

To commemorate the occasion, Installation Management Command-Europe is encouraging communities to sponsor events over the next two weeks to celebrate the Army&#8217;s diversity and equality.

Events such as fun runs and luncheons are in the works, though nothing has been finalized, said Tom Saunders, a spokesman for IMCOM-Europe.

The anniversary, Saunders noted, is an opportunity for people "to remember the challenges and champions of integration."

Richard Kohn, a sociologist at the University of North Carolina in Chapel Hill, said one of the challenges today is defining the very meaning of "progress" as it relates to racial, ethnic, gender and religious integration. How finely grained do you want it, he asks.

"I think the progress in the military has been, in historical terms, enormous," Kohn said in a telephone interview last week, "but at times it has been uneven."

Among the services, Kohn believes the Army leads the way, particularly within the officers corps. But progress along such a front is not always linear, he added.

"We are somewhat of a prisoner of our expectations and definitions," Kohn said.

Within the Army in Europe, there are plenty of examples &#8212; past and present &#8212; of minorities and females rising to the top of an organization.

In Schinnen, for example, both Sumpter, the commander, and Mary L. Brown, the command sergeant major, are female and black. The same is true of the garrison leadership in Kaiserslautern, Germany. And the former senior enlisted member of U.S. Army Europe, Command Sgt. Maj. Iuniasolua T. Savusa, is a native of American Samoa.

When Brown was asked how that squares with the ban on homosexuals serving openly in the military, she chose not to tackle the question. Lt. Col. Mechelle Hale, commander of U.S. Army Garrison Kaiserslautern, passed as well.

"Whatever orders come from my leadership, I will follow them," Brown said.

Hale would like to see even more minorities in leadership positions and greater emphasis on recruitment and mentorship programs.

"We have come a long way," she said, "but there is still some distance to go."

However, based on social science research, the military is well in front of the civilian world in terms of equal opportunity, said James Burk, a professor of sociology at Texas A&M University who specializes in civil military relations.

In the U.S. military, "good race relations are not an end in themselves," Burk said, "they are a means to an end."

That end is military effectiveness.

"Does that mean the Army is a racial utopia?" Burk asked rhetorically. "No, it is not, but it is better than the civilian world."