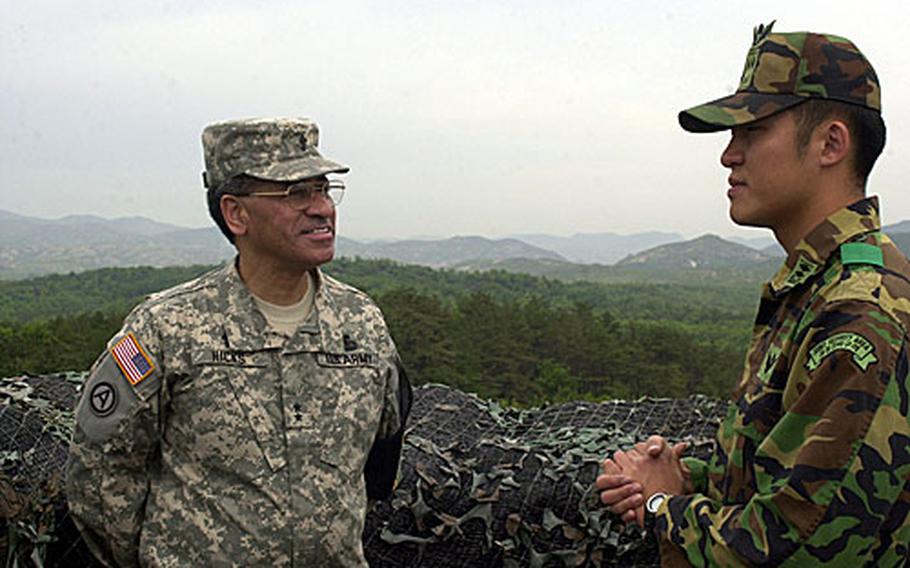 Army Chief of Chaplains Maj. Gen. David Hicks talks with a South Korean officer at Observation Post Ouellette in the demilitarized zone Thursday. Before becoming a chaplain, Hicks served as an infantryman at the DMZ in the 1960s. (Erik Slavin / S&S)

DEMILITARIZED ZONE, Korea &#8212; The modern, slate-gray buildings facing each other along the military demarcation line didn&#8217;t exist when then-Staff Sgt. David Hicks patrolled the DMZ as an infantryman in 1965.

There were no Panmunjom golf tees for sale at the gift shop or busloads of tourists armed with digital cameras.

There weren&#8217;t even any paved roads leading to the observation outposts like the one Hicks, now a major general and the Army&#8217;s chief of chaplains, gazed into North Korea from on Thursday.

It required soldiers to develop a whole new level of attention to their surroundings, Hicks said.

On Sept. 1, Hicks will complete a military career that he began in 1958 as a 17-year-old private.

He wanted to see the DMZ one last time. It was here, at a base near the Libby Bridge, that Hicks had time to study scripture and accept the calling that began at Fort Campbell, Ky., the year before.

When he served as an airborne infantry sergeant, Hicks wasn&#8217;t a religious man. He spent much of his off-duty time on the streets outside Campbell, he said, not doing anything productive.

One day, soldiers were required to report to a guidance lecture. They could choose among chaplains of several faiths, or listen to an officer.

Hicks volunteered to march his soldiers over to the Protestant chaplain. There was something different about him, Hicks said.

Hicks talked with the chaplain about the lack of stability in his life. The chaplain asked if Hicks was ready to begin his life anew.

That thought took hold and grew stronger as he left Campbell and transferred to the DMZ.

By the time he left South Korea for a stint in Germany, he said he knew his original goal to retire after 20 years as a sergeant major would give way to a new path.

In 1967, Hicks was honorably discharged and enrolled at United Wesleyan College in Pennsylvania, where he would meet his wife, Janice. He went on to Princeton Theological Seminary and rejoined the Army in 1974 as a chaplain at Fort Dix, N.J.

His new rank took a little getting used to, he said.

Hicks&#8217; new career would take him throughout the United States and Europe until he landed at the Pentagon as deputy chief, and then chief of chaplains in 2003.

He said he doesn&#8217;t know exactly what he&#8217;ll do following retirement, but don&#8217;t be surprised if it involves public speaking.