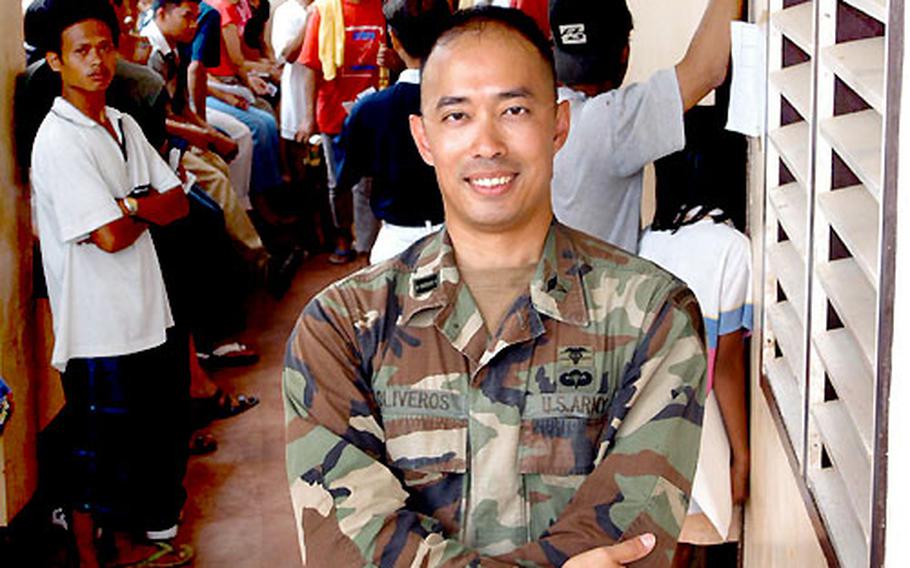 U.S. Army Capt. Ed Oliveros is a native Filipino who returned to his homeland this month to lead the U.S. humanitarian and civic mission in the southern Philippines. He’s standing at a Medical Civil Action Project near Zamboanga City. (Juliana Gittler / S&S)

ZAMBOANGA CITY, PHILIPPINES &#8212; The first 13 years of his life, U.S. Army Capt. Ed Oliveros was a Filipino living in the Philippines.

That changed when his parents packed him and his sister up and moved to Minnesota, where &#8220;there aren&#8217;t a lot of Filipinos,&#8221; Oliveros notes.

It was a big shock in many ways.

The weather, the food and the people are conspicuously different. Even the milk was not the same.

It took getting used to, but he did.

So it was something of a flashback stepping off the plane May 5 to Zamboanga City &#8212; not quite the place he grew up in near Manila, but still pretty close.

&#8220;This is like the good old days,&#8221; he said, noting Zamboanga City is similar to Manila, but without the skyscrapers.

Oliveros arrived this month in Zamboanga to take the lead of the Civil Military Operations Center.

He&#8217;ll be in charge of continuing the medical and construction projects that have been going on for more than a year.

He is most excited about his role in helping people in Zamboanga.

But if he gets permission to leave the confines of his headquarters at Camp Navarro, he will try to see old family and visit places familiar from his youth.

When Oliveros&#8217; parents moved, they left all their relatives behind.

Aunts, uncles and cousins are still here, although they have moved around.

His parents haven&#8217;t seen their homeland since.

Living in Minnesota, Oliveros lost touch with his heritage.

After high school he enlisted in the Army. Five years later, he was commissioned an officer and served until 1998 when he left active duty and joined the reserve.

His career brought him to California, and a more sizable Philippine community where he renewed his cultural ties and refreshed his Tagalog language skills.

His skills managing a company, his Army background and, of course, his heritage make him an ideal candidate to run the operations center.

Before coming he saw pictures of civil affairs projects in the region from fellow reservists and thought it would be a worthwhile cause. He recalled thinking, &#8220;I wouldn&#8217;t mind being a part of that,&#8221; he said.

His reserve duty could keep him here for a year, something Oliveros said he&#8217;s ready for.

He served a similar role for a year in Bosnia and Herzegovina in 1995.

But this time is a little different; now, he leaves behind his wife, Janette, whom he married about a year ago.

Janette recently had moved to the United States from Mindanao, Philippines, where Oliveros now lives.

He&#8217;s never met his in-laws, and after a spate of bombings and shootings in other parts of the island province, he might not get to do that this time.

He can, however, send Janette reminders of home: newspapers, trinkets and candies.

The food is how he remembered it &#8212; fruits, adobo, leche flan. And seafood.

Still, coming to the Philippines isn&#8217;t like coming home.

Most people don&#8217;t even realize his heritage.

Oliveros is pleased to see his homeland and to serve in the humanitarian mission.

Being here also has made him appreciate his dual background and made him aware of the somber realities of his homeland.