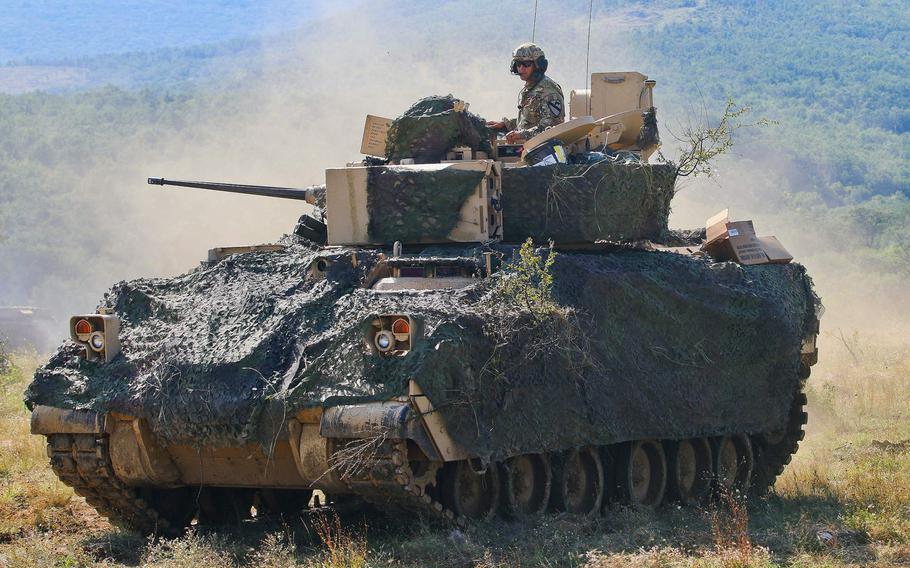 A crew from the 1st Armored Brigade Combat Team maneuvers its M2A3 Bradley Fighting Vehicle during an exercise at Novo Selo Training Area, Bulgaria, in August 2018. The Army has canceled its competition to replace the Bradley after receiving only one qualifying bid. (Jamar Marcel Pugh/U.S. Army)

The Army has canceled a top-priority program to replace the M2 Bradley Infantry Fighting Vehicle after receiving just one valid bid for the $45 billion project.

In a statement late Thursday, the service said it had called off solicitation for the Optionally Manned Fighting Vehicle after deciding to revisit the specifications, acquisition strategy and schedule.

“We remain committed to the OMFV program as it is our second-highest modernization priority, and the need for this ground combat vehicle capability is real,” Bruce Jette, assistant secretary of the Army for acquisition, logistics and technology, said in the statement. “It is imperative we get it right for our soldiers.”

The M2 Bradley, which has been in service since 1981, transports infantry on the battlefield, provides fire support to dismounted troops and combats enemy vehicles.

Updated numerous times, “the M-2 Bradley is considered to have reached the technological limits of its capacity to accommodate new electronics, armor, and defense systems,” the Congressional Research Service said in a report last fall.

Two past efforts to replace the Bradley in 2009 and 2014 were canceled for cost-associated reasons.

By last October, the Army had received just two qualifying bids for its latest replacement attempt — from General Dynamics and a joint venture by Raytheon and Germany’s Rheinmetall.

The Army disqualified the latter because Rheinmetall couldn’t ship a prototype of its Lynx KF41 Infantry Fighting Vehicle to the U.S. by the service’s deadline. That left General Dynamics as the sole bidder.

“The most prudent means of ensuring long-term programmatic success is to get this multi-billion-dollar effort correct,” said Gen. John M. Murray, commander of the Army Futures Command. “We are going to take what we have learned and apply it to the OMFV program to develop our path and build a healthy level of competition back into the program.”