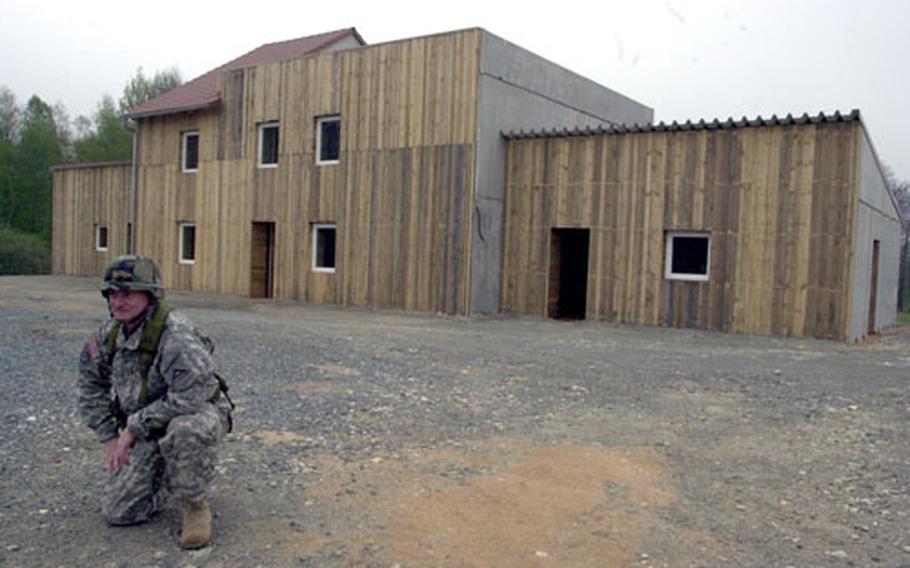 &#8220;We have had MOUT (military operations in urban terrain) sites in the Army as long as I can remember, but this is one step further,&#8221; Mills said of the 5,800-square-foot assault building.

Conventional MOUT sites or shoot-houses are usually single-story bullet-proof structures about the size of a small home where soldiers can practice storming and clearing rooms: skills called on daily in the battles against insurgents in Iraq and Afghanistan.

Large MOUT sites at nearby Hohenfels are mostly blank-fire complexes, although many are being converted to handle simunition &#8212; ammunition with reduced range and lethality and less likely to damage the buildings, Mills said.

The Grafenw&#246;hr assault building &#8212; where soldiers will be able to fire conventional bullets from M-16 and M-4 rifles &#8212; replicates a larger building such as a factory that soldiers might be required to clear, he said.

&#8220;We are integrating live fire into the urban environment with this assault building. This structure would replicate your average building in today&#8217;s contemporary operating environment &#8212; any commercial-type building that you would find in an urban area,&#8221; he said.

It has ordinary windows but they can be protected by sliding wood and steel shutters during live-fire training.

The building also includes a ventilation system, rubber padding on upstairs floors and access to a roof-top balcony. Units from squad or platoon up to company size can train in the building, Mills said. &#8220;You can install pop-up targets inside along with stationary targets and targets representing civilians on the battlefield,&#8221; he added.

The assault building is part of a project to convert Range 307 from a Bradley fighting vehicle range, where gunners practiced engaging pop-up troop and vehicle targets, to an infantry range.