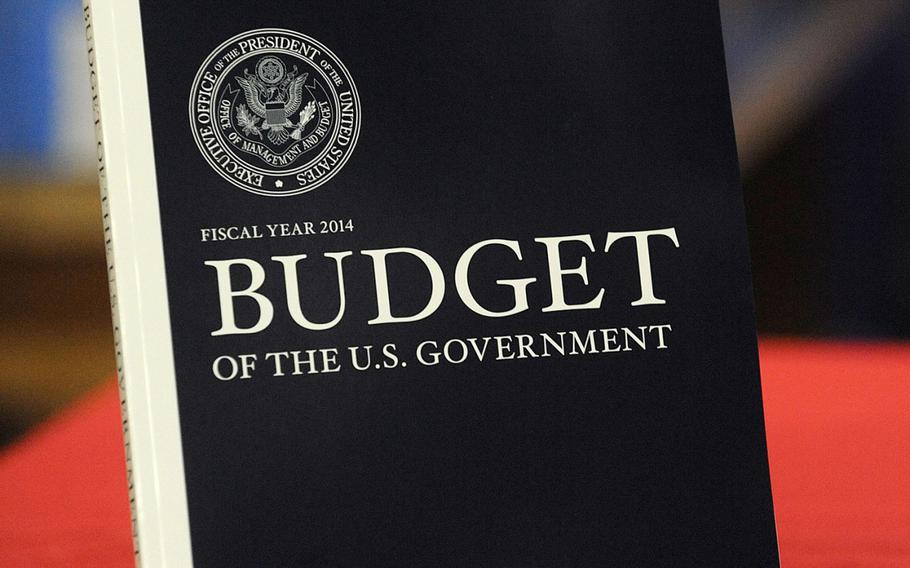 Workers at the US Government Printing Office monitor volumes that are part of the 2014 Budget, Monday, April 8, 2013, in Washington, D.C. President Barack Obama released the 2014 spending budget on April 10. (Olivier Douliery, Abaca Press/MCT)

Workers at the US Government Printing Office monitor volumes that are part of the 2014 Budget, Monday, April 8, 2013, in Washington, D.C. President Barack Obama released the 2014 spending budget on April 10. (Olivier Douliery, Abaca Press/MCT) Army Gen. Martin Dempsey, chairman of the Joint Chiefs of Staff, briefs the press, April 10, 2013, at the Pentagon. Dempsey spoke of President Obama's budget for the 2014 fiscal year as well as the continuing effects of sequestration on the defense budget. (Erin A. Kirk-Cuomo/Department of Defense)

WASHINGTON — The Army would cut about 20,000 active-duty soldiers next year as it continues reducing toward a planned 2017 end strength of 490,000 troops, according to budget plans announced Wednesday at the Pentagon.

By September 2014, 520,000 active-component soldiers would remain in the Army under the plan. The Army National Guard and Reserve, meanwhile, would shed about 4,000 troops, dropping to a total of 559,200 next year.

Congress must approve the cuts, which are part of the Army’s $129.7 billion base budget request – a reduction from last year’s request of $134.6 billion.

The Army budget is contained in President Barack Obama’s 2014 federal budget request. But the document to fund government operations does not take into account spending caps required by federal law, prompting some experts and members of Congress to dismiss its chance of being enacted.

The same law that caps defense spending cut $41 billion from the overall defense budget this year – more than $7 billion of which came from Army accounts. As the service looks to 2014, the effects of 2013 cuts will carry over, Army officials said.

For any units not preparing for duty in Afghanistan, Korea or as part of the Army’s global response force, “we are having to reduce our op tempo, ground miles and our flying hours, and we are starting to see readiness slipping away from some of those units” said Maj. Gen. Karen Dyson, head of the Army budget office. “The inevitable outcome that we anticipate as we enter FY 2014 is that some of our readiness for these units is going to be less than we anticipated when we built this budget.”

The 2014 budget could take its own hit. If Congress does not change the law that required sequestration cuts in 2013, another round of cuts will occur, slashing nearly $52 billion from the Defense Department’s 2014 budget.

Further muddying the Army’s fiscal picture is the fact that the DOD has not presented a request to Congress for wartime funding, which can be estimated to be more than one-third of the Army’s current year budget. The president’s planning for troop levels continued into February, leaving too little time for an Overseas Contingency Operations funding request to be prepared, DOD officials said.

With a shrinking Army, leaders say the service was turning away from training for counterinsurgency-style operations of the sort waged in Iraq and Afghanistan, and focusing instead on “decisive action” – combined arms maneuvers aimed at fighting opposing forces.

The Army’s overall procurement request weighed in at nearly $16 billion, about $800 million below the 2013 request. Among the highlights are $1.8 billion to expand the Army’s mobile communications network and more than $2 billion to buy new CH-47 Chinook and UH-60 Black Hawk helicopters and upgrade old ones.

The Army also delayed procurement of new AH-64 Apache helicopters, creating a savings next year of $1.3 billion. In all, the base aircraft procurement request fell to just over $5 billion in 2014 from nearly $5.9 billion in 2013.

Military construction would take a major hit, dropping by about 40 percent from 2013 request, which officials said reflected a return to historical spending levels.