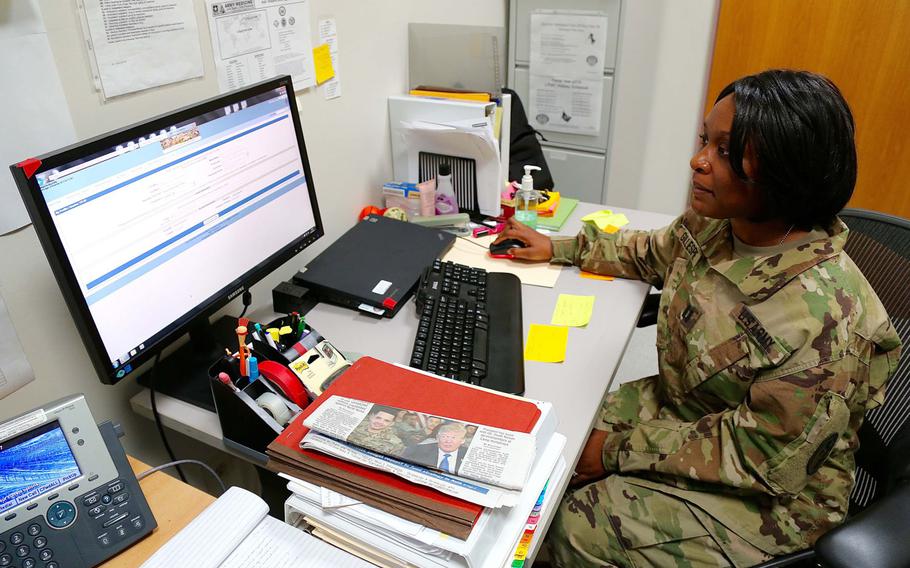 Army Capt. Marquita Gillespie, patient administration officer with the 7227th Medical Support Unit, shows how the Health Experts onLine Portal is used at Landstuhl Regional Medical Center. The 7227th used the portal to give soldiers deployed to forward areas access to medical specialists for treatment. (Will Morris/Stars and Stripes)

Army Capt. Marquita Gillespie, patient administration officer with the 7227th Medical Support Unit, shows how the Health Experts onLine Portal is used at Landstuhl Regional Medical Center. The 7227th used the portal to give soldiers deployed to forward areas access to medical specialists for treatment. (Will Morris/Stars and Stripes) 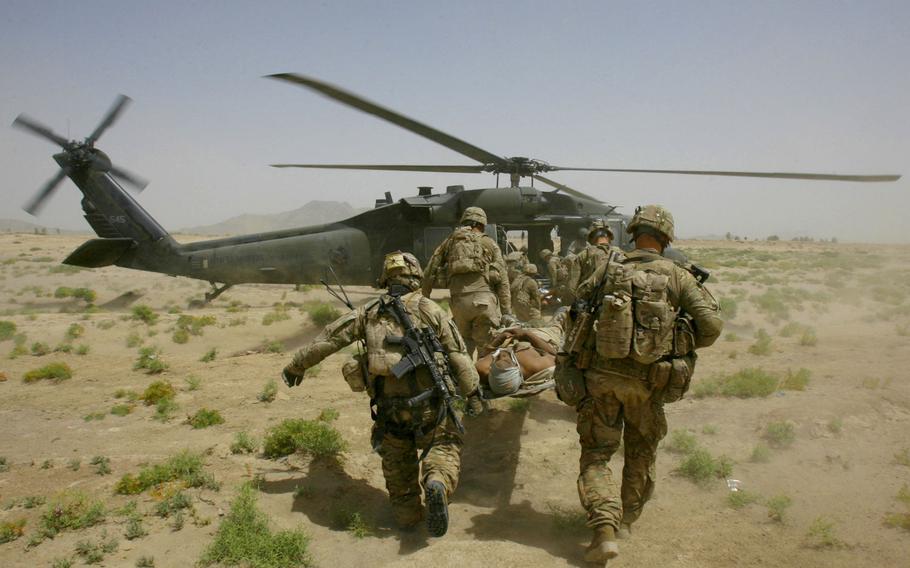 A soldier is evacuated to a medevac helicopter after being injured in an improvised explosive device attack near Molla Dust in Kandahar province, Afghanistan, on June 15, 2011. (STARS AND STRIPES)

LANDSTUHL, Germany — The Army has reduced the need for medical evacuations from combat zones by adapting a Navy program that soldiers say has saved money and improved care.

The 7227th Medical Service Unit at Landstuhl Regional Medical Center — where many wounded servicemembers from Afghanistan first arrive for treatment — earlier this year adopted the Health Experts onLine Portal, or HELP, a web-based program used by the Navy to treat sailors deployed on ships.

The system stores patient information — X-rays, electrocardiograms and treatment records — which specialists anywhere in the world can access to advise less experienced medical personnel on how to treat patients.

Because of improved communications and downrange diagnosis, 40 percent of the patients who would normally have been medically evacuated to Landstuhl were able to remain in theater, according to the hospital.

A deployed doctor who needed to consult a specialist would have to call around and hunt them down, Neil said. When the two finally got connected, they often wouldn’t be able to review vital information together.

“We needed to be able to provide accurate medical consultation across the board of services,” said Neil, whose Columbia, Mo.-based reserve unit recently finished a nine-month rotation at Landstuhl. “There wasn’t really a program designed to do this. We weren’t using anything to do it.”

The 7227th became the first Army unit in Europe to use the HELP system on April 24, with the support of Navy Medicine East in Portsmouth, Va.

Landstuhl’s medical transportation center managed the treatment of 1,067 patients with HELP through early November. From June through September, 64 percent of those patients were from U.S. Central Command, which includes the Middle East and Afghanistan. Behavioral health issues were the most commonly treated problem, followed by orthopedic issues and general surgery, according to unit data.

The first adopters of HELP outside of Neil’s unit were the specialists at Landstuhl, followed by the medical clinic at Ramstein Air Base. Neil quickly found he could use Landstuhl’s location and status to get others to adopt HELP.

“One of the unique things about our area here is that we work so much with all the branches,” Neil said. “In the [medical transportation center] we have Navy sitting right there, we’ve got the Marine Corps sitting right next to us, we’ve got Special Forces, we’ve got Army and we’ve got an entire detachment here from the Air Force. So we’ve got virtually every branch in the United States military except for the Coast Guard right here at Landstuhl.”

Because Landstuhl sends many patients back to the U.S. for further treatment, Neil’s unit was able to interest several major hospitals in adopting the program, including Walter Reed National Military Medical Center. Neil estimates that most military treatment facilities will adopt the system on their own by October 2019.

Capt. Marquita Gillespie, a 7227th patient administration officer who used HELP during their deployment, said she expects the medical community to act rapidly.

“It’s really changed the way we operate; everybody is starting to use it now because it is so efficient,” Gillespie said.