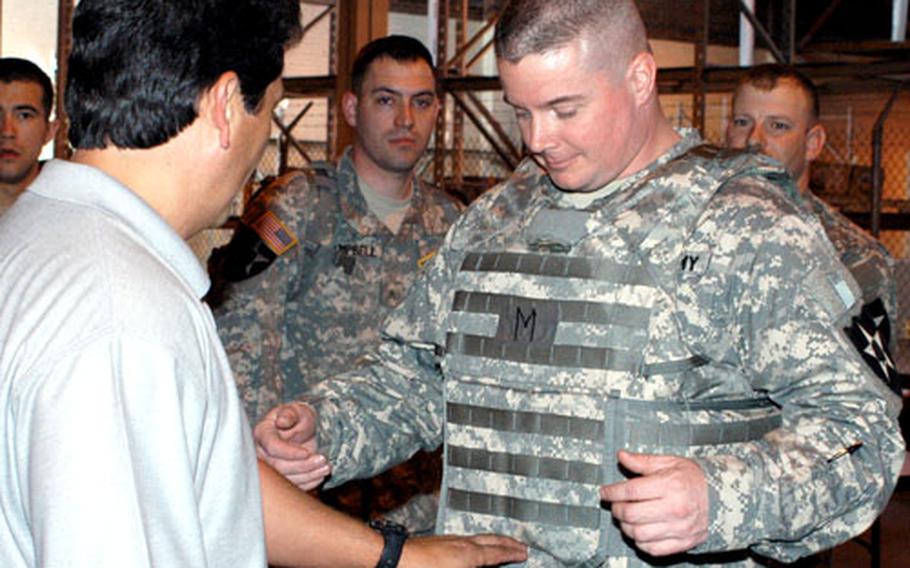 Soldiers with the 4th Battalion, 9th Infantry, which is part of the 4th Stryker Brigade, 2nd Infantry Division at Fort Lewis, Wash., examine the new Improved Outer Tactical Vest. They were the first soldiers to receive the IOTV, according to program managers. (Courtesy of Program Executive Office Soldier)

In April, an official with Program Executive Officer Soldier (PEO Soldier) said that soldiers in Iraq and Afghanistan would begin to receive the Improved Outer Tactical Vests that month.

&#8220;The Army will begin fielding the IOTV April 07 as directed by [Headquarters, Department of the Army/ Army Central Command],&#8221; said Steven Pinter in an e-mailed response to questions to Stars and Stripes last month.

But the Army has not yet awarded a contract for the new body armor, according to PEO Soldier, the Army&#8217;s development center for advanced soldier equipment.

Officials at PEO Soldier declined to comment about why no contract has been awarded.

&#8220;It is not common Army practice to discuss pending contract awards in the media,&#8221; an e-mailed response from PEO says. &#8220;As soon as contracts are in place, PEO Soldier would be pleased to conduct an interview with Stars and Stripes.&#8221;

The new body armor is designed to have an additional 52 square inches of protection in the rear of the vests as well as better carriers for side ballistic plates and a quick-release handle that would allow soldiers to drop their armor quickly in emergencies.

The vests are also three pounds lighter than the body armor soldiers wear now and they feature a waistband that takes much of the vests&#8217; weight off the shoulders.

In addition to the IOTV, the Army plans to begin issuing yet another generation of body armor in fiscal 2010 or 2012 as part of the Future Force Warrior System.

The body armor component of the system, known as the &#8220;chassis,&#8221; is expected to have six ballistic plates that would be 12 percent larger than current Small Arms Protective Inserts and would be shaped to provide more protection along the spine and reduce gaps between the plates.

Before the chassis can be fielded along with the rest of the system, researchers must see if the shaped plates provide the same amount of protection as ballistic plates being used now.

In October, an official with the U.S. Army Natick Soldier Center in Massachusetts said the Army may try to roll out the body armor earlier than planned.

But in February, Maj. Gen. Jeffrey A. Sorenson said the Army&#8217;s time line for issuing the new body armor had not changed.

&#8220;The future body armor has not gone through all its qualification tests, has not been certified, has not been fully validated in tests, so at this point in time it&#8217;s not ready for fielding,&#8221; said Sorenson, who deals with Army acquisition, technology and logistics issues.

Meanwhile, Marines on Okinawa have this year received new Modular Tactical Vests that give Marines more side protection, but so far none of the new vests has been issued to Marines downrange, officials at Marine Corps Systems Command said.

&#8220;The decision to field MTVs to units preparing to deploy in the next few months was based on the need for units to train with the new vests,&#8221; said Systems Command spokesman Capt. Jeff Landis in a Tuesday e-mail to Stars and Stripes. &#8220;Further, each deploying Marine will be properly fitted with the MTV system and the gear normally carried on the vest.&#8221;

By October, the Corps expects to have 60,000 MTVs fielded to operating forces, according to Marine Corps Systems Command.

The Corps plans to introduce the next generation in body armor in the next two to three years, depending on advances in technology.