Army beefs up Europe forces with arrival of aviation brigade 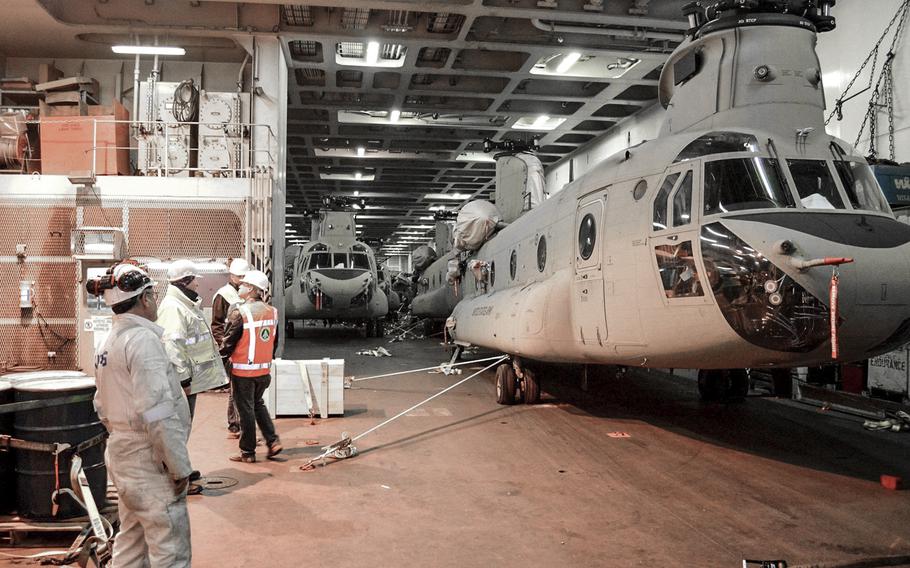 STUTTGART, Germany — A U.S.-based combat aviation brigade offloaded hundreds of pieces of equipment at a port in Belgium and was bound for Germany on Thursday with helicopters that will add air power to a growing Army force along NATO’s eastern flank.

The Fort Drum, N.Y.-based 10th Combat Aviation Brigade, which is beginning a nine-month rotation in Europe, brings with it nearly 2,000 troops and about 50 Black Hawk and 10 tandem-rotor Chinook helicopters.

The latest reinforcements, which are seen as a provocation by Russia, come just three weeks after the inauguration of President Donald Trump, who has indicated he will seek to reduce tensions with Moscow and seek cooperation with Russia in combatting international terrorism.

“We’re going to be all over Europe joining the 'Strong Europe’ team and integrating into their training plan for the next nine months,” brigade commander Col. Clair A. Gill said in a press release.

In addition, an aviation battalion from Fort Bliss, Texas, will be attached to the 10th CAB, bringing with it 400 soldiers and 24 Apache attack helicopters. The brigade will be headquartered in Germany, with soldiers and aircraft circulating through bases in the Baltics, Poland and Romania.

The arrival of the unit’s equipment at the port of Antwerp coincides with last month’s arrival of the 4th Infantry Division’s 3rd Armored Brigade Combat Team, which has already started training with allies in Poland and the Baltics.

“While an armor brigade is a very lethal force, and they’re going to do some fantastic training with our partners on the ground, aviation really is what I like to call that three-dimensional problem solver for the Army, the joint force and our coalitions,” Gill said in the Army release. “We move faster than they do on the ground, and we shoot farther in some cases than some systems from the ground.”

For the Army, the next major troop movement in Europe comes in a matter of weeks as soldiers from the Vilseck, Germany-based 2nd Cavalry Regiment head to Poland, where they will serve as part of NATO’s new “enhanced forward presence.” A battalion of cavalrymen will operate in an outpost in the northeastern section of Poland, not far from Russia’s isolated enclave in Kaliningrad.

Those moves, approved in July by NATO heads of state, represent the alliance’s most expansive military push east since the end of the Cold War. Allies describe the measures as defensive in nature, coming in response to what it describes as a more aggressive Russia.

Moscow, which says it has no designs on NATO territory, has called the deployments an unnecessary provocation that requires countermeasures in terms of beefing up the defenses of Kaliningrad.

Trump, who has called improving relations with Moscow a top priority, is yet to publicly offer his outlook on NATO’s efforts in Europe’s east, which could be a sticking point in future talks with Russian President Vladimir Putin.

Other NATO allies are forming similar battalions in the Baltics, with Germany recently arriving in Lithuania to lead one of the multinational units. The United Kingdom and Canada will lead battalions in Estonia and Latvia.