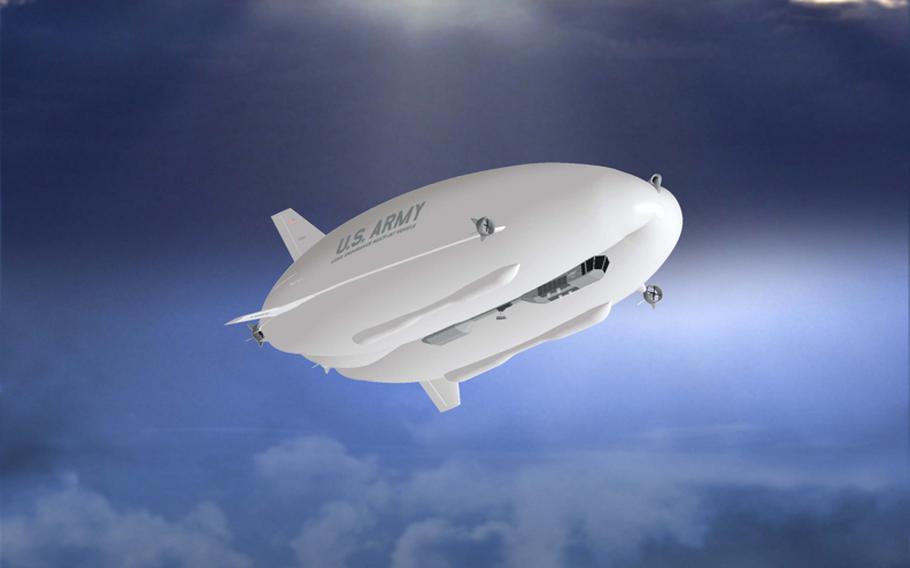 The Army has awarded a $517 million, five-year contract to Northrop Grumman to build the Long Endurance Multi-Intelligence Vehicle, which would provide commanders with real time intelligence, surveillance and reconnaissance information from 20,000 feet. (Courtesy U.S. Army)

NAPLES, Italy &mdash; The Army&rsquo;s newest aircraft looks more like a Thanksgiving Day parade reject than the latest weapon against insurgents in Iraq and Afghanistan.

But the Long Endurance Multi-Intelligence Vehicle is expected to provide commanders with real-time intelligence, surveillance and reconnaissance information, all from 20,000 feet.

The $517 million, five-year contract to build up to three blimplike LEMVs was awarded to Northrop Grumman by the U.S. Army Space and Missile Defense Command/Army Forces Strategic Command. While company officials wouldn&rsquo;t provide a solid launch date, they said the first one should be floating over the skies of Afghanistan in about 18 months.

The airship is the size of a football field, with a shell made of a soft fabric. While still in the testing phase, the craft would carry around 2,500 pounds of gear such as video, radar and sight sensors and stay deployed for 21 days. It can be piloted or function as an unmanned vehicle operated from a ground station.

The shell has a projected life span of at least five years, while hard parts can be overhauled and maintained like any other aircraft.

&ldquo;We see it as an unblinking eye&rdquo; that provides constant surveillance of an area, said Marty Sargent, LEMV project manager for the Army.

It would take about 12 Predator aircraft constantly moving in and out of a particular surveillance area to provide the same amount of data as one deployed LEMV, Sargent estimated.

The electronic systems on board are based on an open architecture design, meaning operators could plug-and-play other devices into the craft&rsquo;s systems.

&ldquo;That gives the Army 100 percent flexibility to plug-and-play systems at will,&rdquo; said Kelly Whalen, head of strategy development for Northrop Grumman. &ldquo;We consider that to be important. As the system is located in whatever theater the Army desires, they&rsquo;re able to snap anything on in there as technology matures, quickly and easily.&rdquo;

The Army plans to operate the LEMV in the unmanned mode while deployed downrange. It doesn&rsquo;t carry any defensive weapons so it will have to be based in a relatively secure location. At a top speed of 80 knots, it could be &ldquo;vulnerable if it&rsquo;s in the wrong neighborhood,&rdquo; according to company officials.

Full testing of LEMV will be done in the U.S. Then it will be flown to the Middle East under manned flight, when deployed.