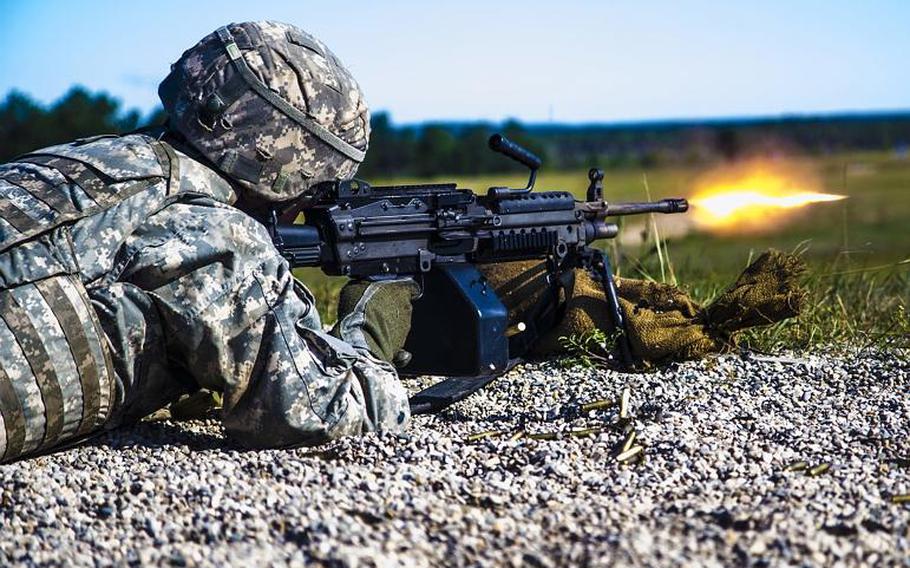 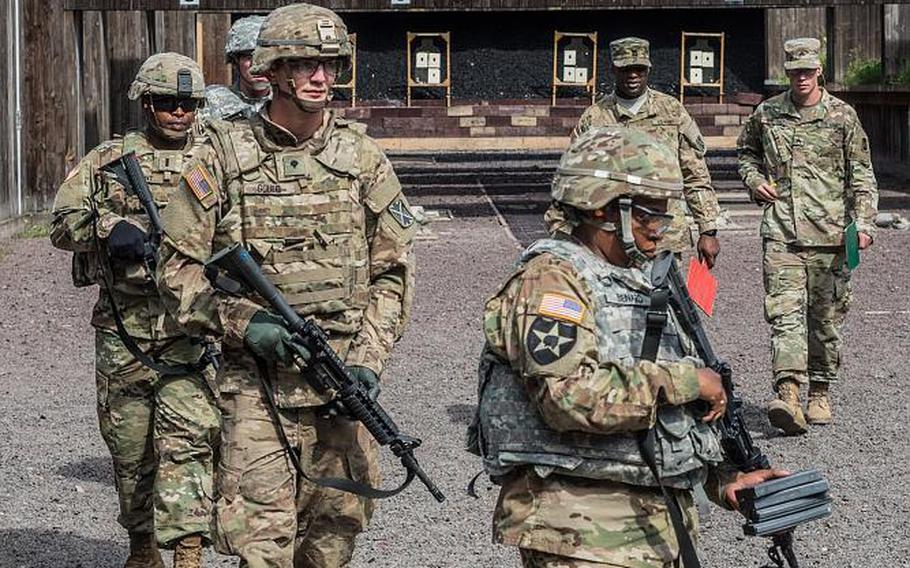 Soldiers assigned to Alpha Battery, 5th Battalion, 7th Air Defense Artillery train on the M4 carbine in Baumholder, Germany on August 2, 2017. The Army is asking for bids on a next-generation weapon that could supplant the M4 and multiple other infantry weapons. (Erich Backes/U.S. Army)

STUTTGART, Germany — The Army is hunting for a new universal assault rifle to arm infantrymen with a lighter, more powerful weapon as a potential replacement for systems ranging from carbines to light machine guns.

The Next Generation Squad Automatic Rifle would fill capability gaps at the infantry squad level, the Army said in a federal contract posting last week.

The planning is in the early stages and no formal contract has been awarded, but the Army’s solicitation for concepts is part of a broader push to modernize the force.

In July, defense contractors asked about the ultimate purpose of the new rifle, which was initially billed as a replacement for the M249 Squad Automatic Weapon, or SAW.

The Army answered that during the next two years, the government will decide whether a next-generation weapon should be able “to fulfill additional roles such as that of the squad designated marksman, medium machine gun, and the carbine,” according to the advisory posted on the government’s main contracting website.

The Army also has been at work developing a new cartridge to replace the 5.56mm round used by the M4 and M16. The aim is to develop ammunition that would be interchangeable with a next-generation weapon.

The M16, chambered for the 5.56 mm round, was adopted in the mid-1960s during the Vietnam War to replace the heavier M14 battle rifle, which used the 7.62mm NATO cartridge. This larger round was considered unnecessarily powerful for that war, where jungle firefights often occurred at very short ranges and where lightweight rifles performed well.

The weapons also proved effective in Iraq, during close-quarters urban combat in cities like Fallujah.

But Army studies have shown that the 5.56mm projectile has poor terminal ballistics, with insufficient velocity to kill an enemy at ranges greater than 300 yards. And in contrast to previous wars, enemies are now likely to be wearing modern body armor, making it even more difficult to incapacitate them with the lighter bullet.

In Afghanistan, critics have said the 5.56 mm bullets were less effective because firefights with Taliban insurgents often happened at ranges of more than 600 yards.

As the Army considers how to arm future soldiers, it also is pondering how to adapt to future battlefields.

The Army was built for decades with an eye to tank battle conflicts fought in open terrain, like the plains of northern Europe or deserts of the Middle East.

By midcentury, 80-90 percent of the world population is projected to live in cities, Army Chief of Staff Gen. Mark Milley said in July.

“We are going through a fundamental change in the character of war, how you fight a war,” Milley said. “The probability is the future battlefield is going to be in urban areas.”

There has been a long-running debate about the quality of rifles used by U.S. infantrymen, with staunch defenders and detractors.

Some have advocated the introduction of an intermediate 6.5 mm round that would have longer range and be more stable in flight than the 5.56 mm bullet, but would still have less recoil in automatic mode than the 7.62 mm round.