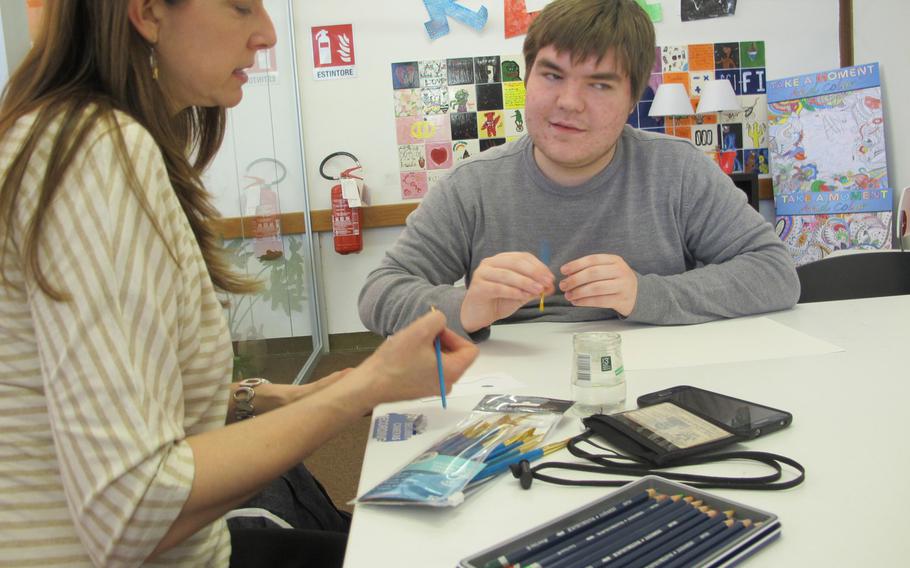 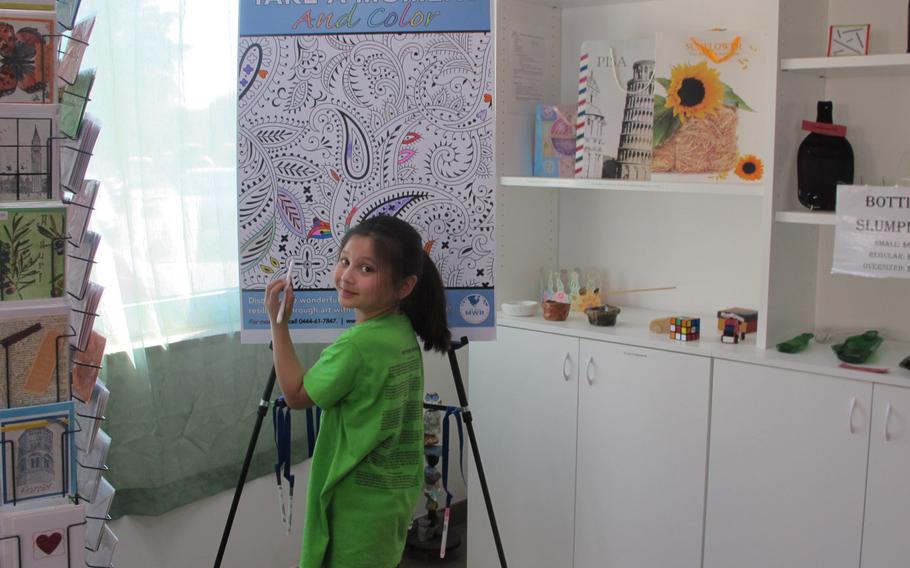 Jasmyne Holcombr takes a moment to color at the Vicenza Arts and Craft Center. The Vicenza center staff wants to put coloring boards and chalkboards in spaces such as lawyers' and doctors' waiting areas throughout the base to engage and relax people. (Nancy Montgomery/Stars and Stripes) 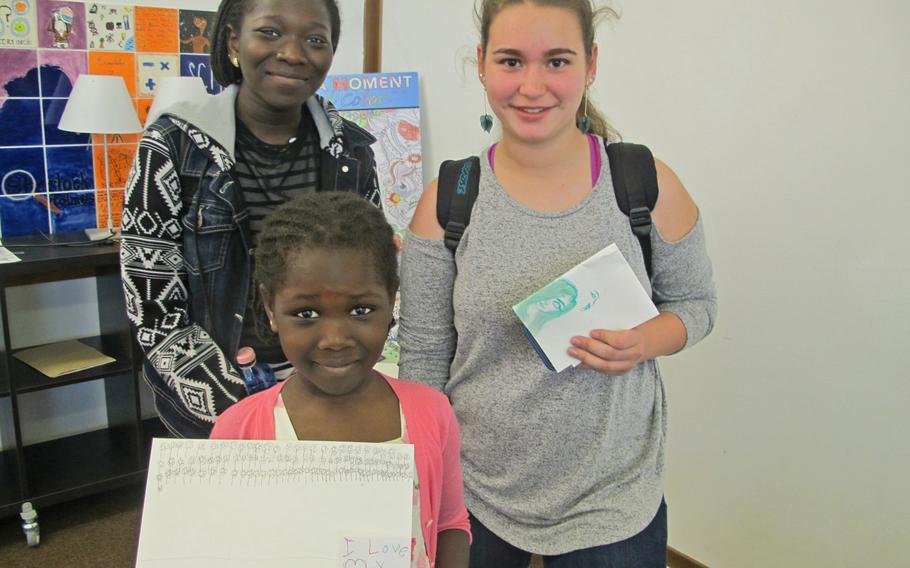 VICENZA, Italy — There was the troubled teenager who learned to love making art more than harming herself. The veteran whose sketch journal helped allay her anxiety enough to forego more medications for PTSD. And the young, drunken soldier who broke into the arts and crafts center, threw a chair through a stained glass window and trashed the place.

Michelle Sterkowicz, an art therapist and supervisor at the center, was sympathetic to them all, even the vandal. When the military police told her that the soldier had been known for anger issues that worsened when he drank, she was indignant. “You do realize we have a program for that,” she replied.

Over the past eight years, Sterkowicz has been at the forefront of an effort to induce people who’ve never painted a sunset, sketched a songbird or even doodled a doodle to give it a try. For many, she said, such activities are relaxing, rewarding, even therapeutic.

“It’s freedom of expression, freedom of choice,” she said. “It’s letting them tap into their creative side.”

It can also be a tough sell. “These soldiers are, like, “What?’”

“I’d say my biggest problem with the program is getting people to use it,” she said. People tell me, ‘You have to go talk to the first sergeants, but I don’t know that they’d listen.”

The Resiliency through Art program started in 2014 throughout the Army, primarily for soldiers assigned to wounded warrior units. Sterkowicz wrote the manual.

For many of those troops, attendance was involuntary, ordered by commanders, and remains so. “At first, they’d sit apart and just wait for the two hours to be over,” said Dania Wong Oriz, who was attending a Vicenza conference last week for Army art program providers and helps run a program for troops in a Hawaii WWU.

But Vicenza’s WWU was disbanded a couple of years ago; such troops are now sent to units in the U.S. “My participation numbers crashed,” Sterkowicz said.

Local officials decided to expand the program and make it voluntary for soldiers, young people and other civilians. Last year Vicenza’s program won a cash award from the Army Surgeon General’s office, which determined that the program “helps with separation, anxiety, depression and anger, and can help boost self-confidence.”

Col. Erik Berdy, U.S. Garrison Italy commander and former squadron commander of the 173rd Airborne Brigade, is a believer. “I grew up drawing,” he said. “When I came out of Afghanistan, I picked it back up. I’d find a quiet place and spend time contemplating and drawing.

“I know this can help,” Berdy continued. “Getting it to the soldiers is always a challenge. You come out of deployment and the first thing you’re not going to say is, ‘Let’s go to the art center and do clay art.’”

Sterkowicz said a key to the program is to not focus on the end result or “product” but on the process of creating it.

“You put the tools out, show them the basics of how to use them and you just let them create,” she said. “If someone says they’re not artistic, I say, ‘We all start somewhere.”’