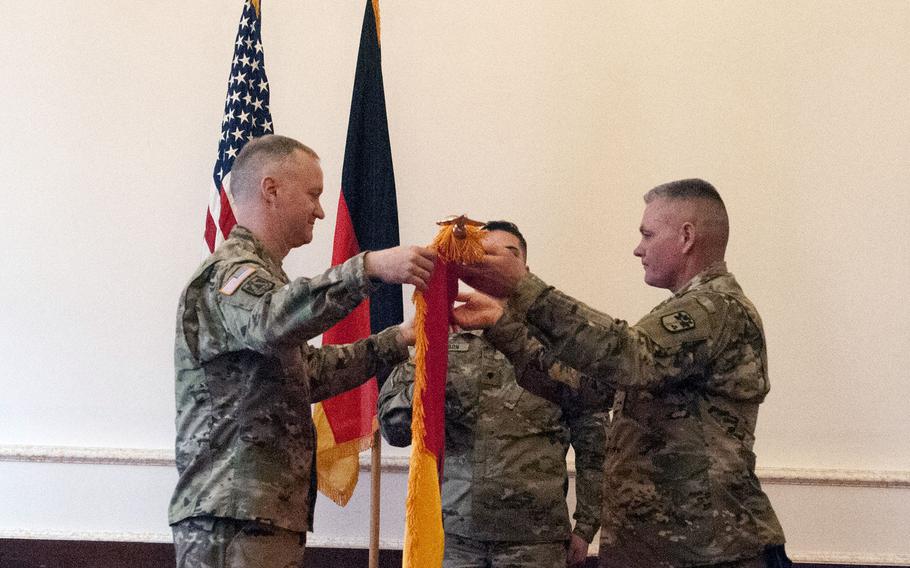 STUTTGART, Germany — A U.S.-based air defense artillery brigade has formally begun its mission in Germany, marking the first deployment of such a unit to Europe since the post-Cold War drawdown.

The arrival of the National Guard’s South Carolina-based 678th Air Defense Artillery Brigade, billed as the only integrated fires brigade in the Army, is part of a broader effort to bolster one of the military’s lingering capability gaps in Europe.

“Back in the 1990s, decisions were made to down size and there was not much of a need for SHORAD (Short Range Air Defense),” said 10th Army Air and Missile Defense Commander U.S. Army Col. David Shank during a ceremony last week marking the 678th’s Europe mission. However, during the past few years the Army has sought to rebuild short-range air defense capabilities, and Europe and the Pacific has been an area of focus in light of concerns about a more aggressive Russia and North Korea.

“Fast forward to today and what does that mean? We have stinger teams, Avenger batteries ... and why we are here today, the 678th ADA BDE,” Shank said in a statement.

Earlier this year, the Army in Europe for the first time in 15 years also began training on the FIM-92 Stinger Man-Portable system at its training grounds in Hohenfels.

“Based on the Chief of Staff of the Army’s initiative, getting Europe stood up with short-range air defense Stinger teams is his first priority inside the initiative of getting Stinger teams back online,” Lt. Col. Aaron Felter, the director of training and doctrine for the Air Defense Integrated Office, said in January.

U.S. European Command chief Gen. Curtis M. Scaparrotti told Congress last month that he would like to have an Army fires brigade added to the permanent force structure in Europe.

In the case of the 678th Air Defense Artillery Brigade, the rotation to Europe will last nine months. The unit formally uncased its colors during a ceremony at the Army’s garrison in Ansbach, Germany, which will be a base of operations.

The brigade will help coordinate air defense efforts in the region, with soldiers expected to join exercises with allies in countries such as Poland, Romania and Bulgaria.

During the uncasing ceremony, the brigade commander Col. Richard A. Wholey, Jr, said his soldiers were notified of the Europe mission less than five months ago and ramped up its training in preparation.

“We’re here, we’re ready, and our soldiers are committed to the peace, security and stability of Europe,” Wholey said in a statement.