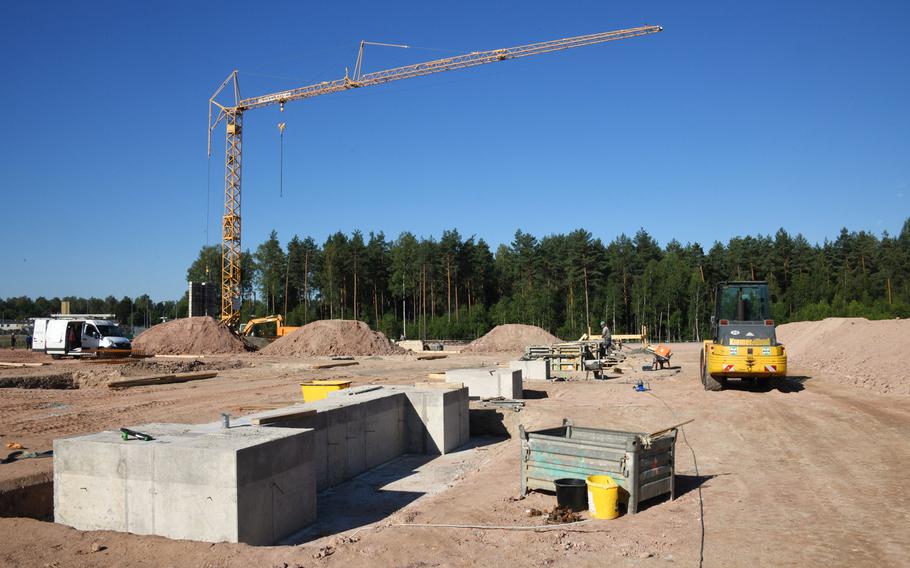 The construction site for the future Training Support Center Grafenwoehr building, at Grafenwoehr Training Area, Germany, Aug. 6, 2020. The Army is planning a $190 million expansion at the training ground, which U.S. troops based in Germany and other parts of Europe visit for major combat drills. (Gertrud Zach/U.S. Army)

GRAFENWOEHR, Germany — The Army has announced a $190 million project to expand its training area at Grafenwoehr in southern Germany, even as the Pentagon moves forward with plans to withdraw troops from the country, U.S. Army Garrison Bavaria said.

The expansion would establish an “operational readiness training complex” at the Grafenwoehr Training Area, which U.S. troops based in Germany and elsewhere in Europe visit for major combat drills.

The complex will include new barracks, dining facilities, a fitness center and other support buildings to accommodate the greater number of U.S. soldiers who are expected to rotate through the area for training, garrison spokesman Donald Wrenn said.

The project, which is still in the early stages, was in the works before President Donald Trump ordered the Pentagon to draw up plans to reduce troop numbers in Germany by 12,000, Wrenn said.

The Army has said it will proceed with the Grafenwoehr expansion as the Pentagon works through details of the troop reduction in Germany. The training area in Bavaria wasn’t tapped for closure when the Defense Department outlined preliminary plans in the summer for how and where the drawdown might occur.

“We will continue to move forward on projects that Congress has directed us to complete,” Wrenn said.

The construction project will improve living conditions for troops as they train at Grafenwoehr, contributing “to our primary mission of strengthening security throughout the region,” he said.

Some of the buildings that will be replaced by the new construction have been in use since the 1950s, he said.

Construction, which will focus on the Camp Aachen and Camp Normandy areas, will begin in fiscal year 2022 and take 10 to 12 years to complete, Wrenn said.

The project is one of two major initiatives announced in recent weeks to upgrade facilities at Grafenwoehr. The German Armed Forces said earlier this month it is launching a multiyear, $141 million project to construct 25 buildings in the Camp Normandy part of the training area. The new buildings will replace outdated facilities used by German troops and will help address an accommodation shortage caused by increased troop rotations, Lt. Col. Florian Rommel, commander of the German training area at the site, said at the time. That project will be funded entirely by Germany, he said.