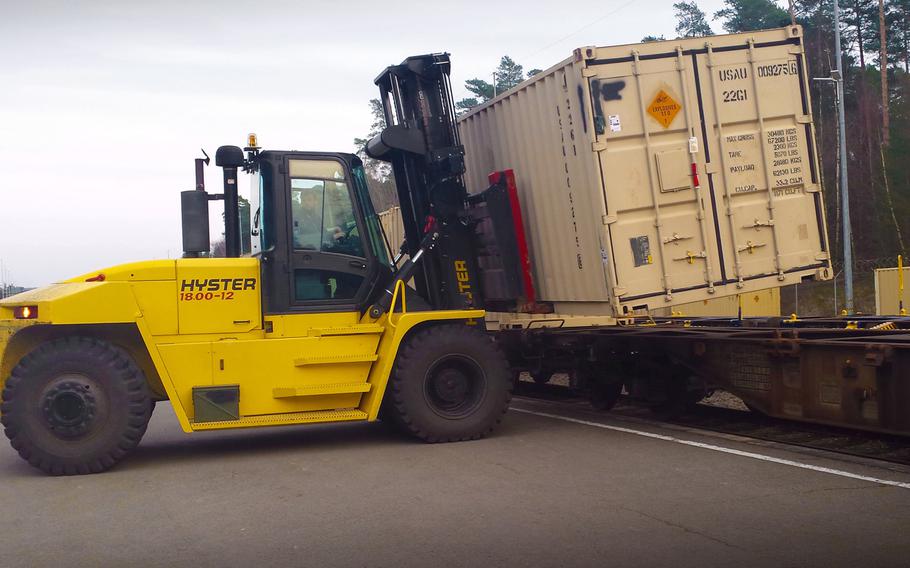 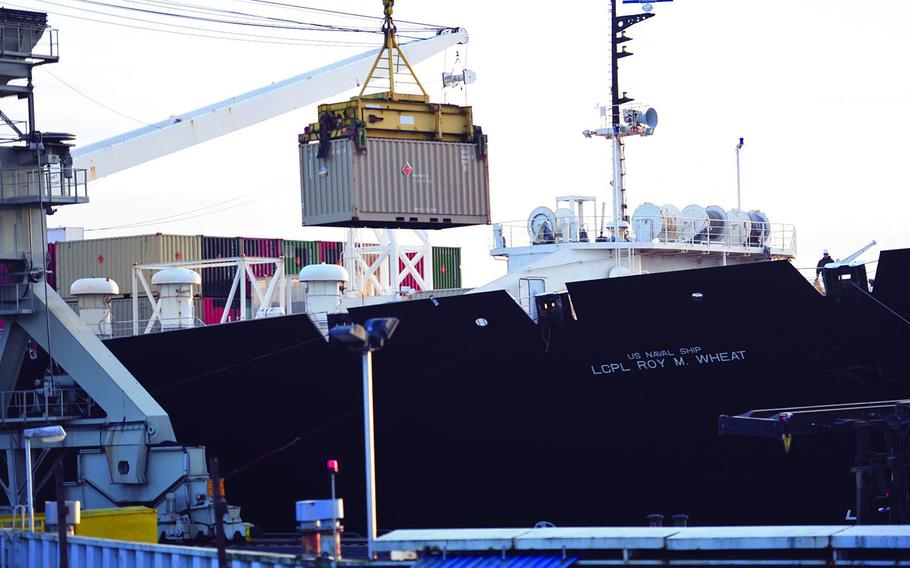 A container full of ammunition is offloaded from the U.S. Naval Ship Lance Cpl. Roy M. Wheat on Oct. 29, 2016, at Nordenham, Germany. (Jacob A. McDonald/U.S. Army)

STUTTGART, Germany — When the Army wants to move ammunition and fuel around the United States, it gets a waiver for road rules that apply to other hazardous materials transporters.

Not so in Europe, where the Army is now spending millions of dollars on upgrading vehicles, to ensure hauls of ammunition to places like Poland and the Baltics don’t get stymied.

“It takes compliance to move hazardous goods in Europe, so for the Army, this of course becomes an issue for freedom of movement and speed of assembly,” said Helmut Haufe, who manages the 21st Theater Sustainment Command’s logistics support office.

About 1,100 vehicles have been modified to meet the standard, but at least another 1,000 need to be adjusted, Haufe said.

Until 2015, Haufe’s office handled 250 to 300 containers of ammunition annually, which went to depots like the Army’s main storage hub in Miesau, Germany.

This year, the number of ammunition containers arriving from the U.S. soared to 1,500, with each container weighing a couple of tons, Haufe said.

The ammunition and fuel support a growing Army mission in Eastern Europe intended to counter concerns about a more aggressive Russia. However, the increase revealed gaps in the Army’s ability to move supplies inside highly regulated Europe.

Europe’s road rules date to the 1960s, but the Army’s large fleet of complying vehicles waned when the Cold War ended.

By 2014, the Army’s tanks had left Europe and the need for moving large amounts of ammunition around the Continent was believed to belong to a bygone era. But when Russia moved into Ukraine, the Army decided it needed to adapt.

Teams of mechanics with the 21st TSC have developed more than 50 different prototypes for vehicles ranging from light to heavy transports, which can require up to 80 added parts.

Vehicles in Europe temporarily also need upgrades, so USAREUR has sent experts to the U.S. to work with Army teams gearing up for a future brigade rotation to Europe.

Haufe, who has been in his current Army job for 19 years, said the pace of operations during the past couple of years has been faster than at any other time.

“We have many challenges, but boredom is not one of them,” he said.