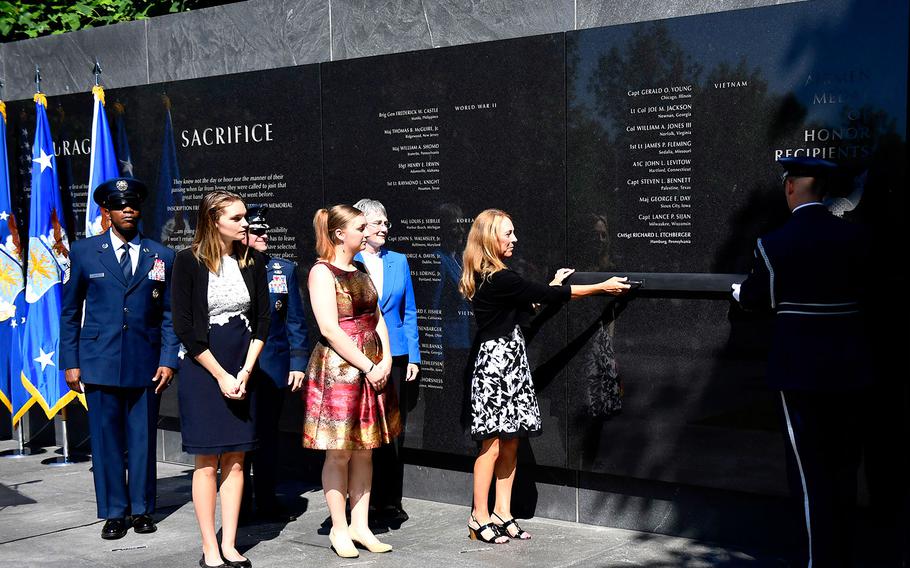 ARLINGTON, Va. — Air Force Tech. Sgt. John Chapman's name was added to the Air Force Memorial and unveiled in a ceremony on Friday, two days after he was posthumously awarded the Medal of Honor.

Chapman became the first airman to receive the nation's highest military honor for actions after the Vietnam War and he also was the first Air Force special tactics expert to ever receive the medal.

In an interview earlier in the week, Nessel said she was only vaguely aware of her husband’s final actions as the Air Force conducted the unprecedented review of his Air Force Cross. When she learned precisely what he had done for his fellow servicemembers it hardly surprised her.

“Knowing John, I wouldn’t have expected anything less of him,” she said. “It’s team before self. I don’t think for a second he thought about doing anything but protecting the other men.”

Nessel, who had two children with Chapman, Madison, and Brianna, described her late husband as humble and kind.

“John would be extremely humbled,” she said. “This medal would not just be about him, it would be for all of the men who were lost on that mountain. He would tell you, basically, ‘I’m just doing my job, just like any of my other brothers would be doing. I was just doing my job.’”