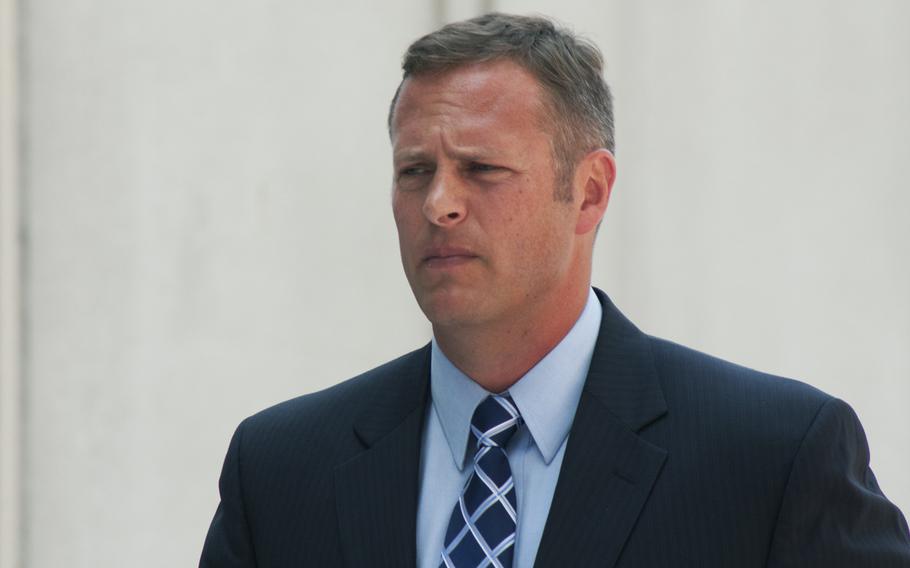 Lt. Col. Jeffrey Krusinski, formerly the Air Force's point man on sexual assault prevention programs, arrives at the Arlington County courthouse on July 18, 2013. Krusinski was originally charged with sexual battery stemming from a May incident in Arlington, Va, but is now being charged with assault and battery. (C.J. Lin/Stars and Stripes)

WASHINGTON — A Virginia grand jury has indicted the Air Force officer who oversaw sexual assault prevention and response programs with assault and battery for allegedly groping a woman in May.

Lt. Col. Jeffrey Krusinski, 41, was initially charged with sexual battery for the incident in which authorities say he grabbed a woman’s breasts and buttocks in a parking lot outside a restaurant in Crystal City, Va., near Washington, D.C. Prosecutors last month dropped that charge and decided to move ahead with an assault and battery charge instead.

Both charges are Class 1 misdemeanors and carry a penalty of up to 12 months in jail and a fine of $2,500, but Arlington County Commonwealth’s Attorney Theo Stamos said Tuesday that a conviction for the sex-related charge requires additional elements of proof of sexual intent.

An assault and battery charge only requires proof of unlawful touching done in an “angry, rude or vengeful manner,” she said.

Before his arrest, Krusinski was chief of the Air Force Sexual Assault Response and Prevention Office.

Along with other recent Air Force scandals — including cases of military training instructors preying on recruits and the overturning of a an Air Force colonel’s sexual assault conviction by an Air Force general — the Krusinski case fed growing outrage in Congress and elsewhere that the Pentagon could not be trusted to stem a rising tide of sexual assault in the military.