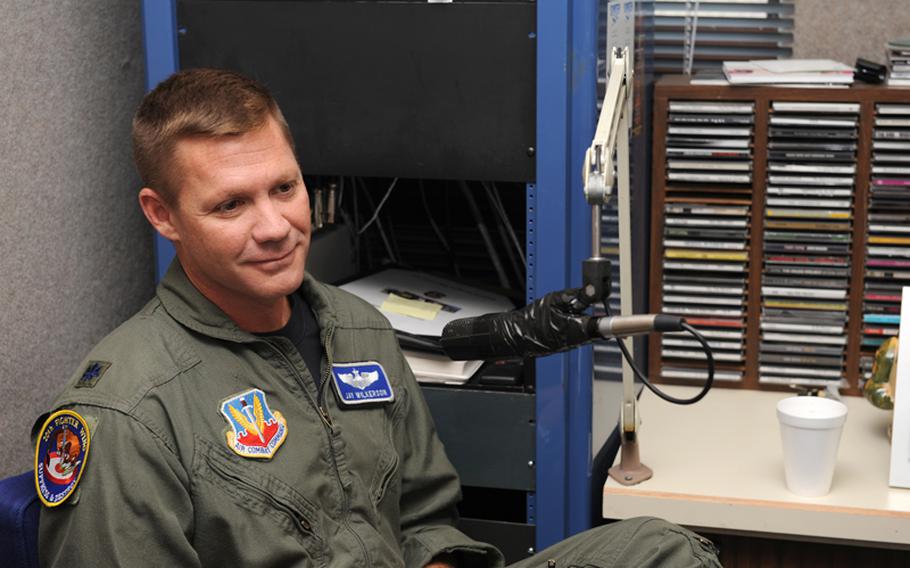 The sexual-assault conviction of the 31st Fighter Wing’s former inspector general was set aside by the Third Air Force commander Tuesday, releasing the fighter pilot from jail and reinstating him into the Air Force.

Lt. Gen. Craig Franklin dismissed the case against Lt. Col. James Wilkerson, who after a weeklong trial in November at Aviano Air Base, Italy, was found guilty of aggravated sexual assault and sentenced to a year in jail, forfeiture of all pay and dismissal from the service.

Franklin, the authority who convened Wilkerson’s court-martial and a former commander of the 31st Fighter Wing who is also an F-16 pilot, declined to provide specifics on why he overruled the verdict and sentence reached by the jury of four colonels and one lieutenant colonel.

A written statement from the Third Air Force said that “… after careful deliberation” Franklin had “concluded that the entire body of evidence was insufficient to meet the burden of proof beyond a reasonable doubt.”

Why Franklin found reasonable doubt where jurors had not wasn’t clear.

“He did look at the same [evidence] that the jury looked at,” said Lt. Col. Paul Baldwin, a Third Air Force spokesman.

Convening authorities have unfettered discretion to reduce penalties in criminal case dispositions and do so frequently. Dismissing an entire case, however, is extremely rare.

Franklin’s disposition of the case came after a uniquely military post-trial review process in which convicted servicemembers petition the convening authority for clemency. Those petitions contain any mitigating factors and letters from supporters. Wilkerson’s 20-year career had provided him with many supporters, especially within the fighter pilot community.

Wilkerson was released on Tuesday from a military jail in Charleston, S.C., and was on leave, Baldwin said. He said personnel specialists were working to do the necessary paperwork to return Wilkerson, who had been selected to be promoted to colonel, to “full-duty status.”

Wilkerson, 44, had been accused in March of stealing into the bed of a sleeping houseguest, groping her breasts and digitally penetrating her after the woman had been invited to spend the night at the Wilkerson home near the air base following an impromptu party.

The woman, a 49-year-old physician’s assistant, had met the Wilkersons only that evening. She testified that she’d awoken to the assault when she felt discomfort. Then Wilkerson’s wife appeared in the bedroom doorway, turned on the light, saw her husband in her guest’s bed and ordered the woman out of the house.

It was uncontested that the woman had left the Wilkerson home, shoeless, in the middle of the night.

Wilkerson’s wife testified that she’d ejected the woman in the middle of the night for being noisy while her husband slept undisturbed in his own bed, and that she hadn’t told him about the incident until the next morning when he awoke.

Wilkerson never testified. Prosecutors did however play Wilkerson’s videotaped interview with investigators for the jury in which Wilkerson denied the accusation.

Before he was sentenced at his trial, he begged jurors for their compassion and promised to retire immediately if the jury did not strip him of benefits.

The case began after the woman sought medical care the next day. It went forward in part, investigators said, because Wilkerson failed a polygraph.

Wilkerson’s accuser said she was “stunned.”

“I was assaulted. I reported it. I endured the public humiliation and the end result is that it was all for nothing,” she said in a statement.

She said she thought that the reversal would have a negative impact on people’s willingness to report assaults and that it “smacks of cronyism, a good old boys network among the elite of the Air Force.

“Would the Lt. General’s decision been the same if Wilkerson had been enlisted or not a pilot?” she said.

Frank Spinner, Wilkerson’s lawyer, did not return calls for comment.

The case, in which prosecutors won a conviction against a senior officer based on the credibility of a less powerful accuser and circumstantial evidence that supported her version of events, was hailed as evidence that the Air Force was intent on holding perpetrators accountable and had gained prosecutorial expertise in doing so.

But critics of the military response to sexual assault said they were not surprised by Franklin’s decision to dismiss the case.

The organization is among numerous advocacy groups and members of Congress calling for the chain of command to lose all authority over sexual assault cases.

Wilkerson had been in custody at a U.S. brig. His whereabouts on Wednesday were not known, nor was it clear whether he’d be returned to his IG position at Aviano.