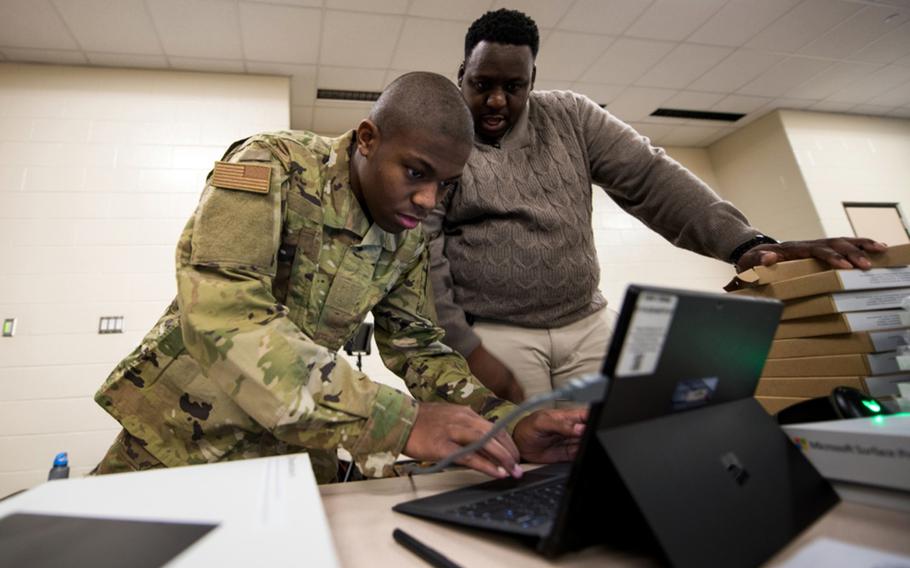 A trainee at Air Force basic military training signs into his new computer at Joint Base San Antonio-Lackland, Texas, Dec. 11, 2019, as part of an initiative that provides instructors with immediate feedback about trainee performance. (Sarayuth Pinthong/U.S. Air Force)

Two flights of basic trainees, roughly 100 recruits, began testing the new platforms Dec. 11, said Capt. Tyler Hoff, a training flight commander with the 321st Training Squadron at Joint Base San Antonio-Lackland, Texas. The tablets use adaptive learning software that recognizes when a trainee is struggling in a specific subject and adjusts the curriculum accordingly, he said.

The concept of using computers and an online curriculum for studying and testing may improve the quality of training by providing instructors with immediate feedback about trainee performance, Hoff said.

Each tablet, which allows trainees to type notes in class, is linked to a “parent” device that notifies instructors when a student is not studying or is struggling in a certain area, he said.

All other trainees are using the traditional printed study guide with the same material.

If the learning platform proves itself at basic training, it could become part of Air Force enlisted professional military training, Hoff said.

One idea is that the tablet will stay with the new airmen as they continue to technical school, the next phase of training, Hoff said. He said the computer could potentially stay with that same airman through Airman Leadership School or Noncommissioned Officer Academy, “although lots of testing … needs to occur before that happens.”

Airman Leadership School is a six-week course attended by senior airmen who have been selected for promotion. The Noncommissioned Officer Academy, NCOA, is attended by technical sergeants as a requirement to be promoted to master sergeant. The online study guide also allows the Air Force to update the curriculum at any time. The printed curriculum may be updated only every six months, when the new study guides are printed, Hoff said.

For example, immediate changes to the Air Force history section can be made to reflect current operations in the Middle East while students are in class.

Lamelin said the new platform has encountered a few glitches, including Wi-Fi connectivity issues and ensuring trainees keep the tablets charged and don’t break them. Two of the program’s computers had to be replaced after being dropped, he said. Only one flight was issued impact-resistant cases, while the other has bare tablets.

The Air Force is not paying for the program, Hoff said. Under the contract to test the curriculum software, civilian corporations are footing the bill, although the service will pick up the tab if it decides to roll the system out across basic training.

The contractors also helped the service ensure that trainees are not distracted by social media and do not use the devices to access unapproved websites, Hoff said. Each device is set up to mimic a child-parent set-up. Students can use the devices only for certain hours each day, and any unapproved activity is immediately sent to the parent device controlled by the instructors.

The study will wrap up Jan. 21 when the trainees take their final test before graduation, Lamelin said.