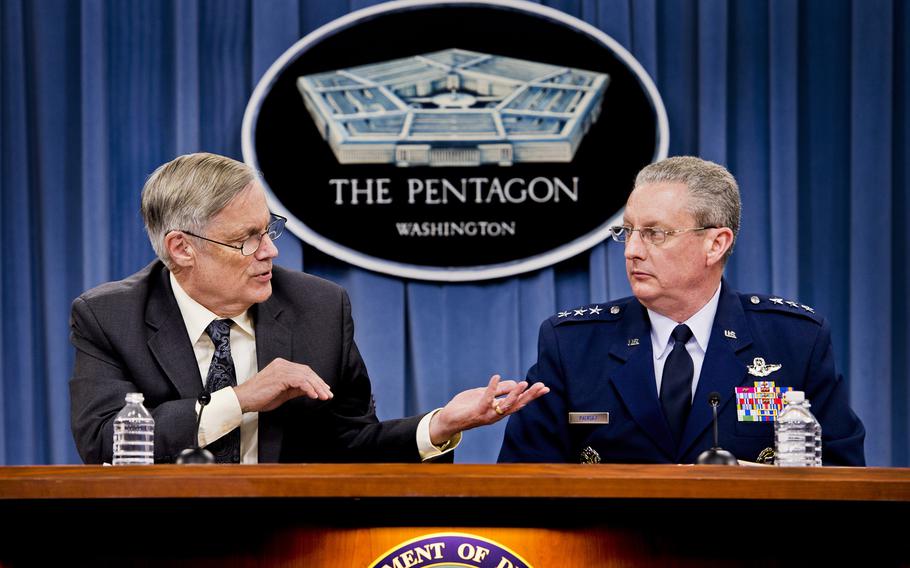 Under Secretary of Defense Robert Hale and Lt. Gen. Mark Ramsay, Director, Force Structure, Resources and Assessment, Joint Staff, brief the press at the Pentagon, April 10, 2013. The two spoke of how the Department of Defense will efficiently and affordably maintain readiness. (Aaron Hostutler/Department of Defense)

Under Secretary of Defense Robert Hale and Lt. Gen. Mark Ramsay, Director, Force Structure, Resources and Assessment, Joint Staff, brief the press at the Pentagon, April 10, 2013. The two spoke of how the Department of Defense will efficiently and affordably maintain readiness. (Aaron Hostutler/Department of Defense) 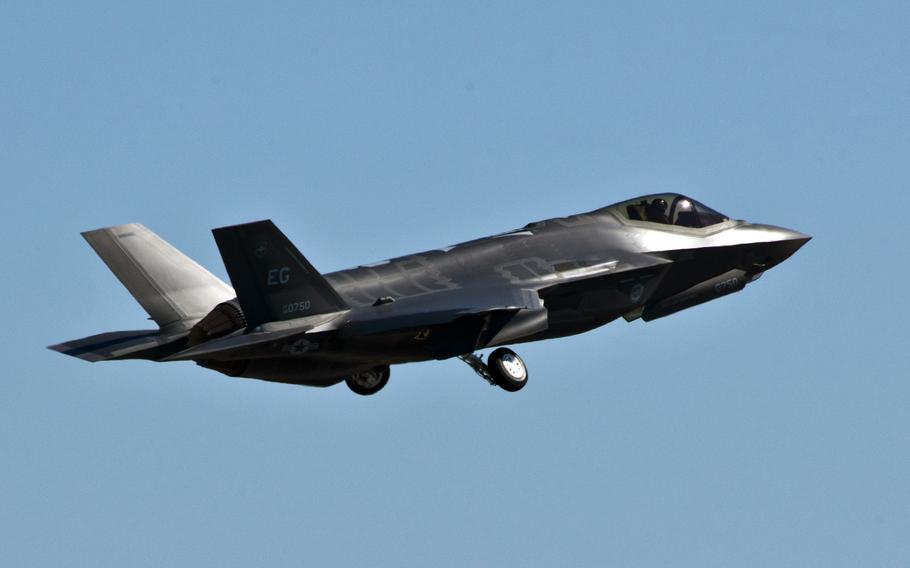 WASHINGTON – The Air Force wants to shed 2,640 airmen next year, according to the service’s 2014 budget request laid out Wednesday at the Pentagon.

The plan would cut 1,860 billets from the active-duty force, 480 from the Air Force Reserve and 300 from the National Guard.

As with all budget requests, the plan must be approved by Congress, and that process frequently involves extensive changes. The Air Force’s plan to reduce 9,900 airmen last year, for instance, was significantly reduced by Congress, and the bulk of cuts were shifted from the Air National Guard to the active-duty Air Force.

This year's budget might be more hypothetical than most, with the looming possibility of sequestration cuts that could total nearly $52 billion DOD-wide in 2014. The cuts will take place if Congress does not change the Budget Control Act of 2011, which would take about $500 billion dollars out of the Pentagon budget over a decade – the consequence of legislators’ inability to pass legislation cutting the federal deficit.

“The sequestration reductions we’re currently experiencing will result in an impact to our ability to be ready,” said Gen. Edward Bolton Jr., Air Force deputy assistant secretary for budget in the financial management and comptroller office. “This budget request does not include the funding it would take to repair that damage.”

But as with the rest of the Pentagon, under direction from the White House, the Air Force did not take the possibility of further damaging cuts into account in its budget plans.

Among planned aircraft purchases in 2014 are 19 F-35A Joint Strike Fighters, 12 MQ-9 Reaper drones – half the number the Air Force planned to purchase this year – and thee CV-22B Ospreys. The Air Force would also add six C-130J cargo planes and 4 more C-130s configured for Air Force Special Operations Command missions. And the proposed budget would provide for 8,129 bombs and missiles in 2014, nearly double the number it planned to acquire this year.

The Air Force said it also planned to continue research and development of the KC-46A tanker and F-35. In addition, the service requested $5.4 billion for nuclear weapons, up $300 million from the 2013 request.

“If sequestration continues in ’14, there will be additional impacts,” he said. “Regardless, we’ll continue to make the tough choices necessary to protect our core capabilities, and we will deliver on our commitments to national strategy.”

Asked whether a new round of sequestration would cause deeper personnel cuts, Bolton said he would not speculate but added, “We’re not going to get out of this problem by reducing a few slots here or a few slots there. It’s going to have to take some significant change, and so a slight trimming is not going to be the answer.”