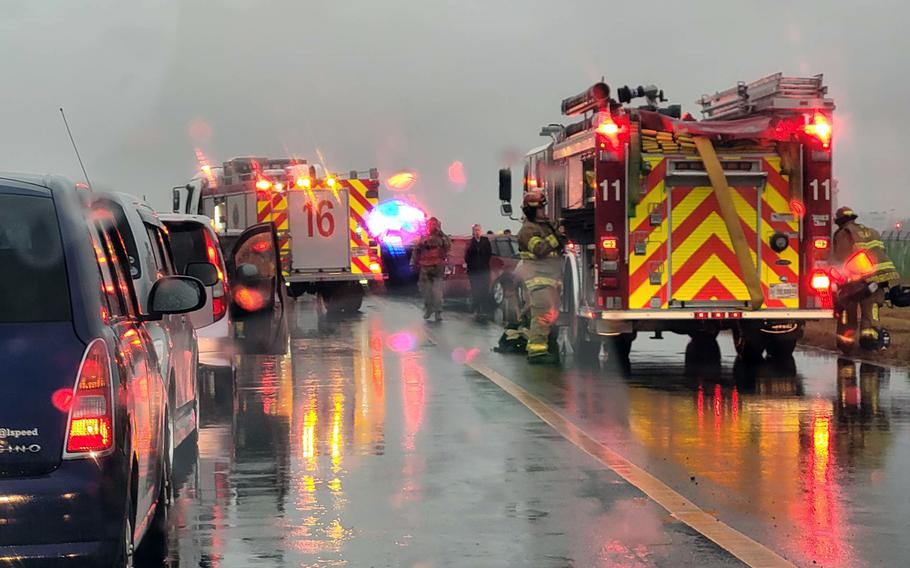 Emergency workers respond to a car accident near the runway at Yokota Air Base, Japan, Wednesday, Nov. 23, 2022. (Lisa Haskell)

YOKOTA AIR BASE, Japan – A car rolled over on a road that overruns the runway at this airlift hub in western Tokyo, injuring the driver and stopping traffic across the airfield’s south end on Wednesday morning.

Commuters left their vehicles in a downpour to assist the woman after her car hydroplaned at approximately 7:50 a.m. and flipped on the overrun, Rochelle Phelps, 59, told Stars and Stripes by Facebook Messenger on Wednesday.

Phelps, a clinical therapist on base, said the driver was westbound on the overrun when the accident happened.

“The vehicle was coming towards me and the back end hydroplaned and then the vehicle flipped and was on its side,” she said. “I pulled over and went to see if the person was conscious and had any visible injuries that needed attention. It was a woman, and she had her arm pinned under her.”

The loop road that circles the airfield crosses the runway at the south end. Signal lights on either side of the runway stop traffic when aircraft approach or depart. Drivers are cautioned not to stop anywhere along the overrun road between the east and west traffic lights.

“I stopped because I wanted to make sure that the people in the car were OK,” Phelps said. “I think it is important because I would want people to do the same for me.”

A driver behind Phelps also stopped, crawled under the overturned car near the injured driver, who was alone in the car, and turned off the engine, Phelps said. The injured woman appeared to be in shock, she said.

“They just tried to keep her calm as another lady came up with a phone and called emergency services,” said Phelps, of Fairfield, Iowa. “Another lady came up and held her neck (because of possible injury) until emergency personnel arrived. A couple of guys kept traffic from moving.”

About seven people stopped to render assistance at the scene until emergency services arrived, she said.

Air Force spouse Allie Wylie, 34, of Wichita, Kansas, told Stars and Stripes by Messenger that she saw people exit their vehicles to help after the accident.

“I was able to drive through it all because people had gotten out of their cars to help direct traffic through the scene,” Wylie said. “Some were guiding traffic and directing cars and others were working to help with the actual accident. I was really impressed with the people helping and how they kept things going around it so smoothly.”

Phelps said she was heartened by the sudden response to an emergency.

“I thought that it was a great thing,” she said. “All the people that stopped it kind of reaffirms your faith in the goodness of people.”

First responders arrived and cleared the incident, and traffic resumed as normal.

Flightline operations were not affected by the accident, a spokesman for Yokota’s 374th Airlift Wing told Stars and Stripes by phone.

“The vehicle was significantly damaged, and an individual was transported to an off-base medical facility to receive medical care,” said 1st Lt. Danny Rangel. “The incident is under investigation by Yokota Air Base authorities.”