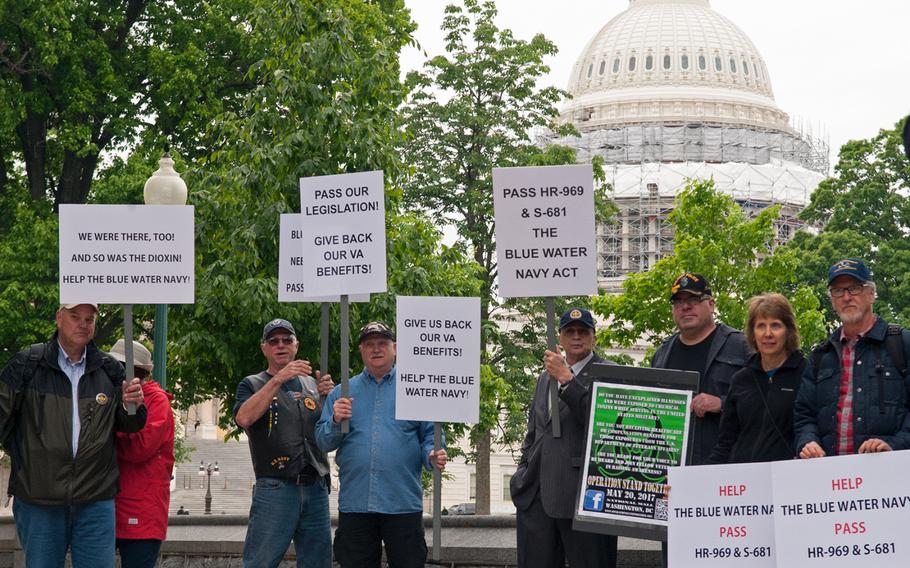 Buy Photo
In a May, 2016 file photo, Blue Water Navy Vietnam veterans gather near the U.S. Capitol to rally for support of passage of a bill to regain benefits related to Agent Orange exposure. (Meredith Tibbetts/Stars and Stripes)

As many as 90,000 ailing “Blue Water Navy” veterans are likely to have to wait for a new Congress to see legislation passed that would make them eligible for Agent Orange-related disability compensation and VA-paid health care.

Sens. Johnny Isakson, R-Ga., chairman of the Senate Veterans’ Affairs Committee, and Jon Tester, of Montana, its ranking Democrat, negotiated this week with veteran service organizations, seeking to amend the House-passed Blue Water Navy Vietnam Veterans Act (HR 299) in ways that would satisfy both veteran groups and Republican senators threatening to block a vote on the bill.

The negotiations exposed a deepening desire among Senate Republicans to impose tighter controls on creating presumptions of service connection between certain exposures, including herbicides sprayed in the Vietnam War, and diseases of veterans involved in past or future wars. Battle lines are forming over whether Congress and past Department of Veterans Affairs secretaries have gone too far in building lists of conditions that VA presumes are linked to toxins, burn pits and battlefield environments.

The high-water mark for veteran advocates might have been reached in June when the House passed a Blue Water Navy bill unanimously. By August, a new VA secretary, Robert Wilkie, reversed that momentum, directing deputies to strongly oppose extension of Agent Orange-related benefits to sailors and Marines who patrolled territorial waters off Vietnam but didn’t come ashore or operate in “brown water” nearer to sprayed foliage or runoff from dioxin-laced herbicides.

Wilkie wrote to Isakson in early September that the science doesn’t support extending benefits to Blue Water Navy veterans, given that exposure levels are undetermined and the potency of dioxins sprayed over land likely was diluted so as not to affect personnel at sea. He also complained that passage of HR 299 would slow efforts to end a backlog of VA compensation claim appeals, and that the House bill would cover the cost of new benefits in part by raising VA home loan fees, including, for the first time, imposing fees on disabled veterans, those who seek to buy higher priced homes using VA-backed jumbo mortgages.

At a late September hearing with Wilkie, Isakson insisted to colleagues that Wilkie had agreed to work with his committee on a compromise Blue Water bill. Wilkie, however, didn’t affirm such cooperation that day or since.

With a lame-duck Congress set to adjourn by mid-December, Isakson advised veteran groups he doesn’t have time to build a routine business case for a revised bill with a committee hearing and floor debate. Instead he hoped for a quick deal on a few amendments so the Senate could approve the bill by unanimous consent.

Rep. Phil Roe, R-Tenn., chairman of the House Veterans’ Affairs Committee, told me Tuesday he was standing by to get a revised bill back from the Senate that veteran groups endorsed and the House could pass again for Blue Water veterans. But an eight-day window to get all of that done was closing fast, Roe warned.

Meanwhile at least three Republican senators — Mike Enzi, of Wyoming; Rand Paul, of Kentucky; and Mike Lee, of Utah — were said to have put holds the Blue Water bill that would block a swift year-end Senate vote. We learned their names hours before deadline and asked the senators’ offices to confirm their opposition.

Only Lee’s office responded immediately, saying he “did object to passing the bill by unanimous consent. Other senators also have concerns. Senator Lee wants to wait for a forthcoming study on the extent of Agent Orange exposure,” which Wilkie promised to deliver in 2019, “before this bill is voted on.”

Isakson continued his fight for a late-hour compromise. He did so by embracing an informal but controversial proposal from first-term senator and physician Bill Cassidy, R-La. Cassidy supports the Blue Water legislation but to attract support from more colleagues, he proposes the bill change current law to require a stronger scientific association between toxins and lists of medical conditions that VA presumes are caused by exposure.

Cassidy and Isakson asked executive directors of the four largest veteran service organizations — The American Legion, Veterans of Foreign Wars, Disabled American Veterans and Paralyzed Veterans of America — to back an amendment that would require that the science show a “sufficient” association between a toxin and a disease before a VA secretary can add it to a presumptive ailment list.

Under current law, a VA secretary can add an ailment to VA’s presumptive list if the National Academy of Medicine confirms either a “limited or suggestive” association between exposure and disease or a “sufficient” association.

Veteran groups this week rejected that proposal. Cassidy and Isakson countered by adding a “sunrise” feature. That is, Congress would pass the Blue Water bill and adopt the stiffer presumptive standard but delay its enforcement for two years. This would allow Congress and veteran groups time to negotiate a more acceptable path for strengthening the science behind presumptive conditions.

Vet groups made a counter proposal: Pass the Blue Water Navy bill and veteran groups would promise to engage in a presumptive decision-making debate with concerned lawmakers in 2019. The bill also would amend the plan to pay for Blue Water benefits, accepting Isakson’s idea to continue to protect all disabled veterans from VA home loans fees but extend the period when higher fees are imposed on other VA home loan users by two years. That’s where negotiations stood by Thursday, and with at least one senator still prepared to block a vote.

In a related development, the National Academy of Medicine released a new Agent Orange report in November that upgrades to “sufficient” the strength of association between hypertension (high blood pressure) and herbicide exposure. This upgrade from limited or suggestive association seems to strengthen the possibility that hypertension will be added to the Agent Orange presumptive list — even if something like the Cassidy proposal were to become law and remove many more ailments from the presumptive list for future claimants.

However, even a revised Agent Orange law would not mandate that a VA secretary adopt every National Academy recommendation. Hypertension is so prevalent among older Americans that every VA secretary since 2010 has declined to add it the Agent Orange presumptive list even though the strength of association to herbicide exposure matched that of less common ailments on the list.

If, as expected, the Blue Water Navy bill sinks in the Senate this week, Republicans are likely to keep its fate in the next Congress tied to their desire to strengthen the science behind presumptions of service-connected exposures.