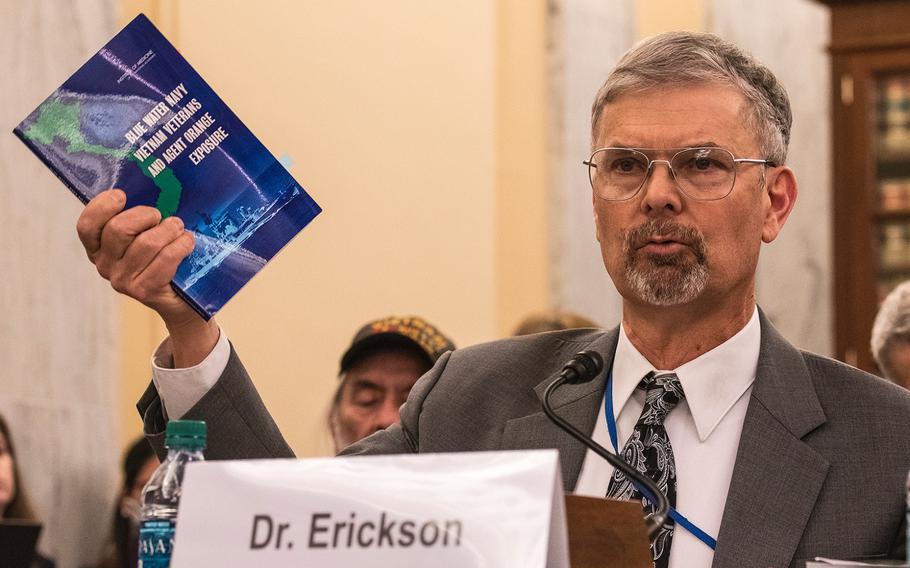 Buy Photo
Dr. Ralph Erickson, a VA expert on post-deployment health issues, holds up a pamphlet addressing the Blue Water Navy veterans, while giving testimony on Aug. 1, 2018, at a Senate Veterans Affairs Committee hearing, as members heard arguments for and against the Blue Water Navy Vietnam Veterans Act. Erickson told senators most of the ailments presumed to be caused by Agent Orange also are tied to aging. (Carlos Bongioanni/Stars and Stripes)

Buy Photo
Dr. Ralph Erickson, a VA expert on post-deployment health issues, holds up a pamphlet addressing the Blue Water Navy veterans, while giving testimony on Aug. 1, 2018, at a Senate Veterans Affairs Committee hearing, as members heard arguments for and against the Blue Water Navy Vietnam Veterans Act. Erickson told senators most of the ailments presumed to be caused by Agent Orange also are tied to aging. (Carlos Bongioanni/Stars and Stripes) Using the last arrow in their quiver, veteran groups and service organizations urged President Donald Trump on Wednesday to use his personal influence with two Republican senators to persuade them to allow a vote on the Blue Water Navy Vietnam Veterans Act (HR 299) before the 115th Congress expires next week.

In a joint letter hand-delivered to the White House, seven groups representing a combined five million veterans asked Trump to issue “a public statement of support for the legislation, indicating that you would sign this bill.”

They predicted this “could help to persuade” Sens. Mike Enzi, of Wyoming, and Mike Lee, of Utah, to drop their opposition and allow a fast-track “unanimous consent” vote, which they predicted “would receive overwhelming support.”

Enzi on Monday evening blocked a first attempt for a unanimous consent vote on the bill made on a motion from Sen. Kirsten Gillibrand, D-N.Y. Sen. Johnny Isakson, R-Ga., chairman of the Veterans’ Affairs Committee, endorsed the motion, but Enzi used authority that every individual senator has to block such votes.

Within six minutes of Gillibrand filing her motion, Isakson delivered his supportive pitch and Enzi blocked the vote.

Isakson argued his committee had “done the hard work” needed for colleagues to feel comfortable passing the bill by unanimous consent versus a full committee vote followed by hours of floor debate, the traditional path to final passage no longer open as the Senate rushed to complete other term-ending tasks.

Passed by the House unanimously in June, the Blue Water Navy bill stalled for months in the Senate, in part because, by August, the Department of Veterans Affairs under new Secretary Robert Wilkie had begun attacking it vigorously with the encouragement of the veteran policy officials in the Trump White House.

The bill would make tens of thousands of ailing veterans who had served on ships in territorial waters off Vietnam, and their survivors, eligible for VA disability compensation and health care for health conditions associated with exposure to Agent Orange or other herbicides sprayed on jungles and forests during the war to expose enemy positions.

“We finally have addressed all those things everybody has said about the Blue Water Bill [that] they didn’t like,” Isakson said. “Except some people want another study [or] to wait until the VA says they need this, that or the other. [Or] we don’t even have the right number as to how many people this might affect.”

What the Senate does know, said Isakson, is that the original Agent Orange Act of 1991 allowed VA to presume exposure to herbicides for anyone who served in the war theater. Only years later, in 2002, did VA interpret the law as applying only to veterans who served ashore. Later still, it expanded Agent Orange benefits to “brown water” veterans who had patrolled rivers and harbors of Vietnam.

“I would just ask every member, before they consider casting a no vote against this unanimous consent, to think about what you’re doing,” Isakson said. “You’re saying ‘no’ to those who have had a benefit taken away from them by the VA itself. You’re putting off a decision we’re going to have to make in the future. You’re not allowing us to do what we really ought to do.”

Enzi immediately opposed the motion, citing a fresh cost estimate of $1.3 billion over 10 years from the Congressional Budget Office, which is higher than the CBO estimate given the House before it passed HR 299 in June. VA’s own analysis projects costs five times higher than that original estimate, Enzi added.

“There’s clearly more work to do just on figuring out the spending and the administration of this, and the deficit impacts this bill will have,” said Enzi, who has watched the national debt balloon as chairman of the Senate Budget Committee.

Another concern he cited was that HR 299 would cover part of the cost of expanding Agent Orange-related benefits to Blue Water veterans by raising fees on veterans using the VA home loan program. But fee increases planned would not be near enough to cover revised cost estimates. Also, he added, it’s still uncertain how many veterans and survivors would become eligible for Agent Orange benefits, the range of estimates falling between 60,000 and 440,000, he said.

“That’s a pretty big gap on who we let in, if they’ve got a [health] problem we need to take care of,” Enzi said. Therefore, despite the work done on HR 299 this year by Isakson; Sen. Jon Tester, D-Mont.; and colleagues, still more time and study are required.

Wilkie had urged the Senate delay passage of HR 299 at least a year to consider findings of a new study to be released in 2019 comparing the overall health of Vietnam veterans with that of all Americans of similar age.

On Tuesday, Gillibrand, Tester, who is ranking Democrat on the Veterans’ Affairs Committee, and Sen. Steve Daines, R-Mont., held a press conference with veteran group representatives. The senators vowed to file at least one more motion for a unanimous consent vote on HR 299 in the days ahead.

The veterans groups who appealed to Trump — Disabled American Veterans, The American Legion, Military Officers Association of America, Veterans of Foreign Wars, Vietnam Veterans of America, AMVETS and Paralyzed Veterans of America — believe another unanimous consent motion will give the president time to reverse VA’s own stand on this issue and pressure Enzi and Lee to drop their opposition, a move that would gain the everlasting gratitude of Blue Water Navy veterans.

Tester predicted that if Enzi or Lee continue to block a unanimous consent vote, almost two years would pass before the next Congress, in its final months, would be motivated to reconsider benefits to Blue Water veterans and survivors.

“We understand there is concern about the cost to provide benefits and health care to Blue Water Navy veterans suffering … illnesses linked to Agent Orange,” the vet groups told Trump. “But when our nation asks its brave men and women to serve in harm’s way, America assumes a sacred obligation to care and compensate for the injuries and illnesses they suffer during that service.

“Some have argued that Congress should continue waiting until there is more ‘scientific’ evidence. However numerous studies by the Centers for Disease Control [and Prevention], the National Academy of Medicine and others have already found there is no scientific basis to exclude [these] veterans from benefits linked to Agent Orange exposure.”

The letter closes with a vision for the president who often touts his “incredible” support for veterans, advising Trump that they “look forward to the day when you will be able to sign this legislation and finally pay a long overdue debt to thousands of Blue Water Navy Vietnam veterans.”