Blended retirement's lump-sum feature is enticing, but is it fair? 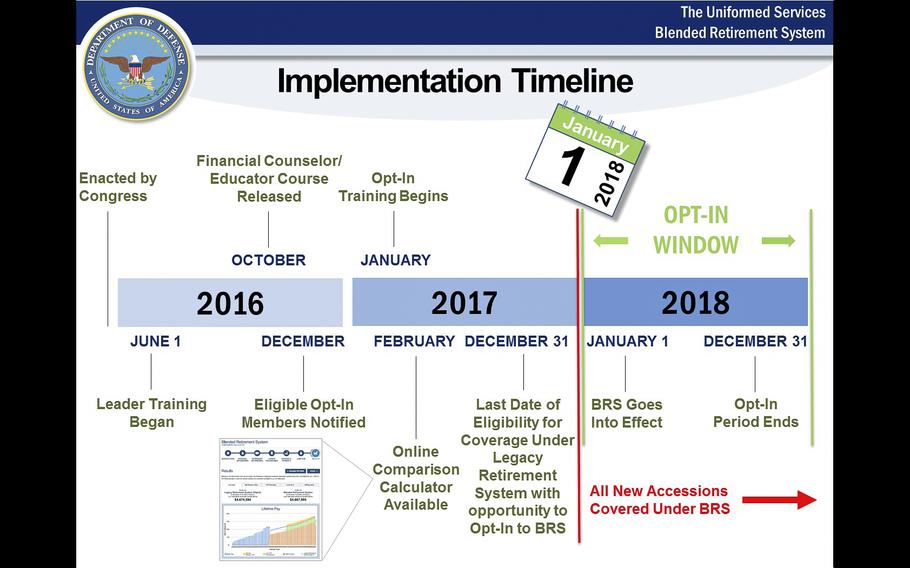 When the first wave of active-duty personnel who opt into the new Blended Retirement System (BRS) next year start to retire a decade later, they will face a decision on retired pay so unusual that the Department of Defense Board of Actuaries has called it inappropriate and asked Congress to rescind the choice.

Congratulations on your pending retirement. Do you want your full immediate annuity? Or do you prefer to get part of its value in a discounted lump sum at retirement, in return for forfeiting either one half or one quarter of your retired pay until age 67, when you would see full annuities restored?

Lump-sum buyouts of pension obligations are common in the corporate world but not the formula Congress has prescribed for setting military lump sums. The amounts offered will be too large to ignore for many retirees seeking to get out of debt, buy a home or start a business. But the lump-sum choice also will have members lowering the lifetime value of their own retirement packages significantly.

Most disturbing to actuaries and other critics of BRS is that Congress ordered lump sums calculated using “personal discount rates,” a concept that pension guardians don’t recognize as actuarially sound or perhaps even fair. Personal discount rates measure an individual’s preference for current dollars over promised future dollars. The higher the discount rate assumed for folks being offered lump sums in exchange for reduced annuities, the greater the savings realized by the retirement plan’s designers, in this case the U.S. government.

In January, DOD officials announced the formula to be used for setting an aggregate personal discount rate for enlisted and officer retirees. It will combine an inflation-adjusted, seven-year average of the Department of Treasury High-Quality Market (HQM) Corporate Bond Spot Rate Yield Curve at a 23-year maturity with an adjustment factor of 4.28 percentage points. That last factor seeks to capture some of what past studies have learned about military personal discount rates.

It’s a formula incomprehensible to most of us. But Air Force Capt. Daniel Kopp, who has an economics degree from Purdue, is studying to be a financial planner and operates a financial advice blog called militarylifeplanning.com, has it figured out. He said that if adopted today the formula would support applying a discount rate of 7.3 percent in calculating lump-sum amounts under the BLS.

What sort of dollars are we talking about? DOD officials will not announce the actual personal discount rate to be used to illustrate lump-sum values until June 1. But here are calculations Kopp made that actuaries have deemed as reasonable.

If a 38-year-old E-7, completing a 20-year career, could retire today under the BRS formula, the lump-sum offer would be $174,454 in return for forfeiting 50 percent of retired pay until age 67, when this generation also reaches full retirement age for Social Security. The second lump-sum option for the same E-7, payable for accepting a 25 percent annuity cut until old age, would be $87,277.

To allow these calculations Kopp assumed retired pay cost-of-living adjustments of 3 percent to match annual inflation. He also plugged in that personal discount rate of 7.3 percent for both officers and enlisted retirees.

The BLS plan enacted for new entrants starting in 2018, with an opt-in option for current members having fewer than 12 years’ service by then, is the vision of the Military Compensation and Retirement Modernization Commission. Besides a lump sum to attract a 50 percent annuity cut, the commission proposed one big enough to entice new retirees to suspend any retired pay until age 67.

“Research shows that the value a person attaches today to a stream of future payments is typically less than the cumulative amounts eventually paid out,” the commission explained in its final 2015 report.

To estimate required lump sums, however, the commission used RAND Corp. analyses that assigned a personal discount rate of 12.7 percent to a 38-year-old E-7 retiring at 20 years, and a 6.4 percent rate for the 42-year-old officer retiring at 20 years as an O-5. That sharp disparity in rates dampened significantly lump sums projected for enticing enlisted to accept annuity reductions.

DOD asked Congress not to include the commission’s lump-sum scheme in the final BRS plan. The House initially agreed while shaping its retirement reform legislation. Senators, however, favored the feature to hold down costs. So, the final compromise that became law allows lump-sum offerings for accepting a 50 percent and a 25 percent cut in retired pay until age 67.

Last April, as DOD officials focused on how to implement the Blended Retirement features, the American Academy of Actuaries sent a letter to the department roundly criticizing the law’s mandate that personal discount rates be used to calculate lump-sum offerings at retirement.

“Such discount rates would result in lower lump sum amounts … than would be paid, for example, by private pension plans,” the Academy complained.

Discount rates typically used to calculate lump sums for corporate pension plans had ranged from 2 percent to 4 percent from 2010 to 2015, the Academy said.

The DOD Board of Actuaries delivered its own critique of the lump-sum scheme in its December report to the president and Congress on the Military Retirement Fund. Calculating lump sums using personal discount rates is “not an appropriate approach for discounting in a retirement plan environment,” it said.

The board predicted accurately that the department would settle on “some type of aggregate personnel discount rate” for both enlisted and officers. But it also predicted the resulting lump sums could produce behaviors by retirees significantly different than what the commission or Congress had projected. It also could feed a belief the lump sums are designed “to take advantage of our service members.”