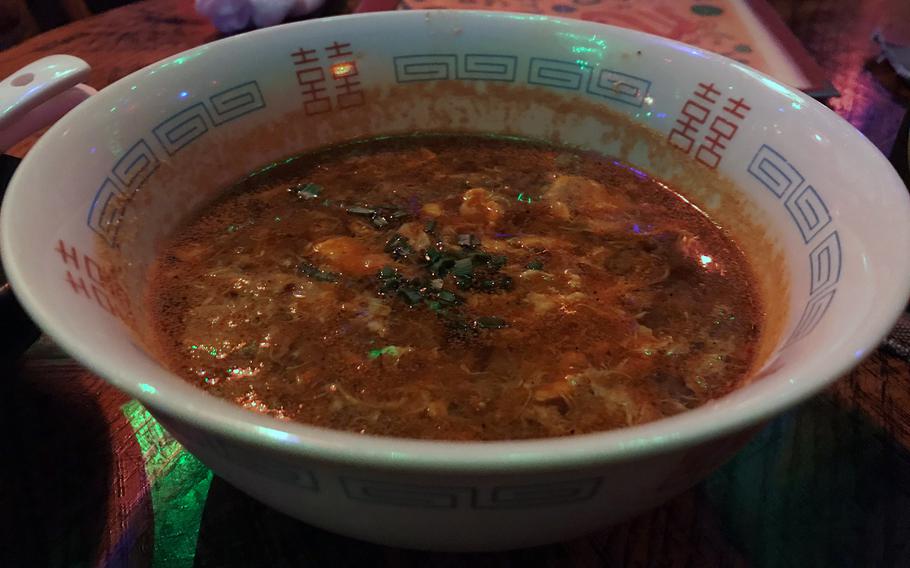 The Sichuan spicy mala soup from Ryu's Dining in Okinawa, Japan, could be one of the best bowls of soup you'll ever have. (Matthew M. Burke/Stars and Stripes)

The Sichuan spicy mala soup from Ryu's Dining in Okinawa, Japan, could be one of the best bowls of soup you'll ever have. (Matthew M. Burke/Stars and Stripes) 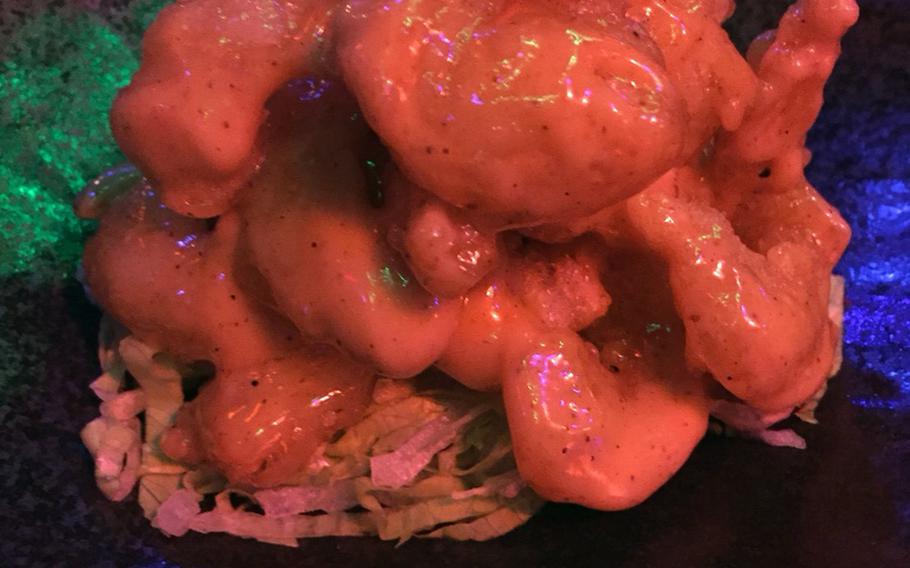 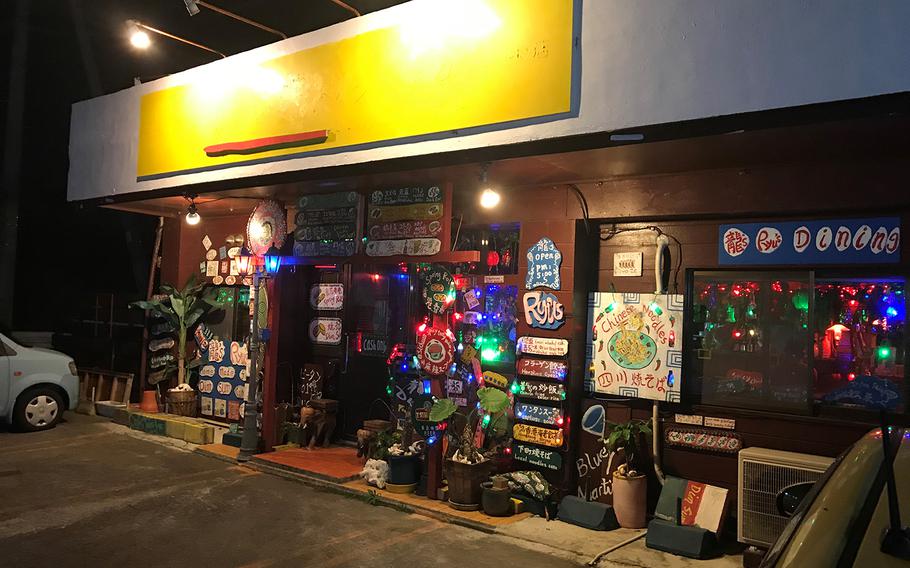 Ryu's Dining in Okinawa, Japan, looks unassuming from the outside but offers some of the best food on the island. (Matthew M. Burke/Stars and Stripes) 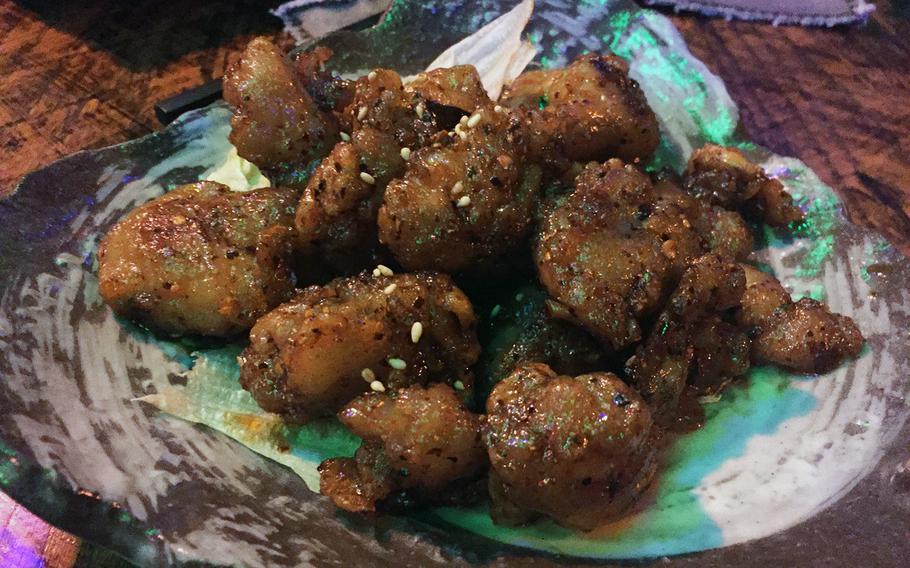 The stir-fried chicken with cashew nuts from Ryu's Dining in Okinawa, Japan, is crispy on the outside and juicy on the inside. (Matthew M. Burke/Stars and Stripes)

Chinese food back home in Massachusetts always consisted of greasy, over-battered chicken fingers; tough-as-leather strips of teriyaki beef; Rangoons devoid of any crab; and fried rice that tasted like it was already a day old.

Japan provided a dramatic improvement. Yet I realize now, having never traveled to China myself, that I’ve never had authentic Chinese food in my life. That is, until I dined at Ryu’s Dining in Kitanakagusuku, Okinawa.

Ryu’s Dining serves authentic, traditional Chinese cuisine made from recipes going back more than a half-century. Some of the dishes boast a flavor profile made up of 20 unique Chinese spices regularly procured in Shanghai and brought back to Okinawa.

The proprietor of the establishment, known affectionately to patrons as “Dragon,” was a high-end chef in Shanghai, then Tokyo, before opening the first iteration of Ryu’s Dining in Chatan. Dragon quickly built a loyal following.

About a year ago, he moved to Kitanakagusuku. It wasn’t long before Dragon’s reputation caught up with the new digs, which became the place to dine in Okinawa city. Now, reservations are encouraged to ensure a seat at the table.

Dragon, with slicked-back hair and a warm, affable demeanor, is downright passionate about food and traditional Chinese cuisine. He refuses to change the recipes to make them more friendly to foreign palates. He doesn’t allow his food to be taken to go because it would degrade the product.

Instead of buying pre-ground spice mixtures in Shanghai, he brings them back whole and grinds them himself shortly before serving to ensure freshness and flavor.

He often makes recommendations to first-timers on what to order. Overflowing with personality, he is like the world’s best car salesman offering a ride on a true culinary journey.

The chicken was transcendent, crispy on the outside, juicy on the inside, with hints of smoke, sweet and tang. The spiciest version comes with a dull but building heat that will leave you sweating without burning your mouth or sacrificing any of the flavor.

The Sichuan spicy mala soup for $7.24 was the perfect blend of sweet, sour and spice, complete with ground meat, egg and vegetables, and aside from authentic Vietnamese pho, was arguably one of the best bowls of soup I have ever had.

The “Shanghai double rich tasty stir-fried egg rice,” or fried rice, at $7.24 was light and fluffy, simple, with a unique flavor I couldn’t identify. Again, arguably the best I have ever had.

“Ryu’s special dim sum” ($5.50) is two large dumplings that come with a dipping sauce that boasts a wide array of Chinese spices. The dumplings were robust and hearty, the meat and vegetable filling inside was light and clean, and the sauce was like nothing I have ever tasted before.

Other standouts include the crispy, creamy shrimp for $7.24 and the special pickled cucumber for $4.12.

Ryu’s Dining also offers a wide array of alcoholic and non-alcoholic beverages, from classic cocktails to Chinese beer, fruit juices, soda and Chinese tea. There is a $1.10 service charge, according to the menu.

Ryu’s Dining has the best Chinese food I have ever had. It might even be the best food I’ve ever had. That’s a bold statement, but one would be hard-pressed to convince me better Chinese food exists anywhere else, including in the People’s Republic.

Directions: After passing the Aeon Okinawa Rycom Mall on your right on Route 85, take a left at the second set of lights. Ryu’s Dining is on the right side, across the street from King Tacos, about a quarter-mile up the road.