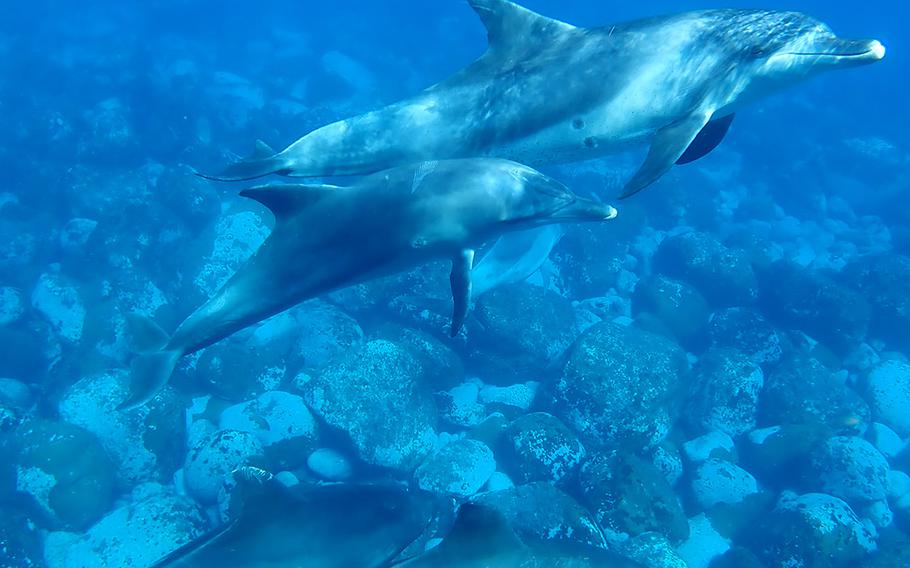 Indo-Pacific bottlenose dolphins living near Mikura Island, Japan, protect a calf during a swim in May 2019. (Aya Ichihashi/Stars and Stripes) An Indo-Pacific bottlenose dolphin swims with a calf near Mikura Island, Japan, in May 2019. (Aya Ichihashi/Stars and Stripes) 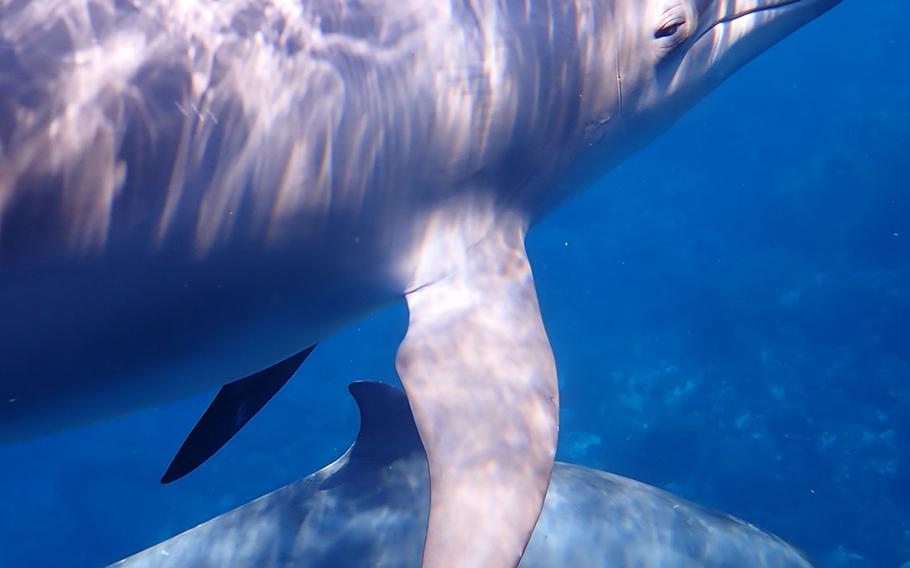 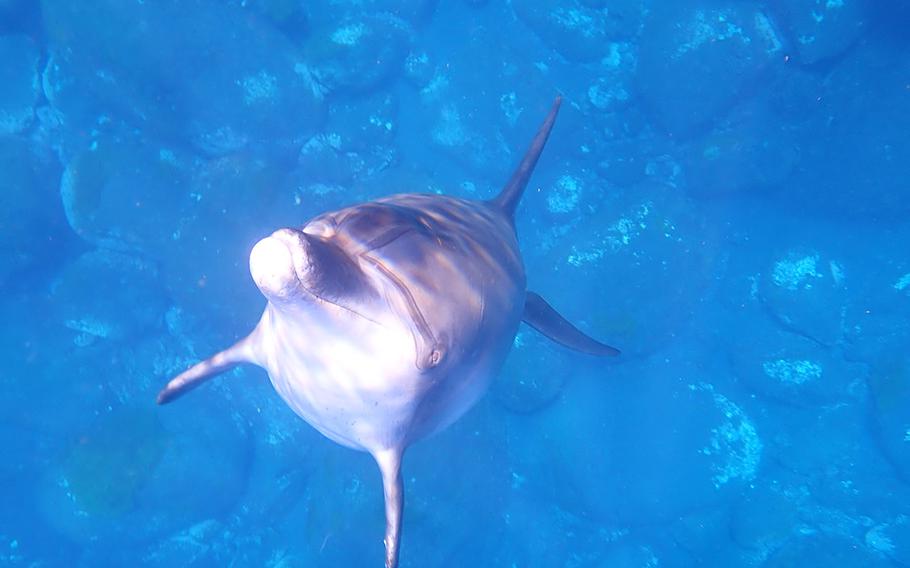 An Indo-Pacific bottlenose dolphin named Smile looks up at swimmers near Mikura Island south of Tokyo in May 2019. (Aya Ichihashi/Stars and Stripes) 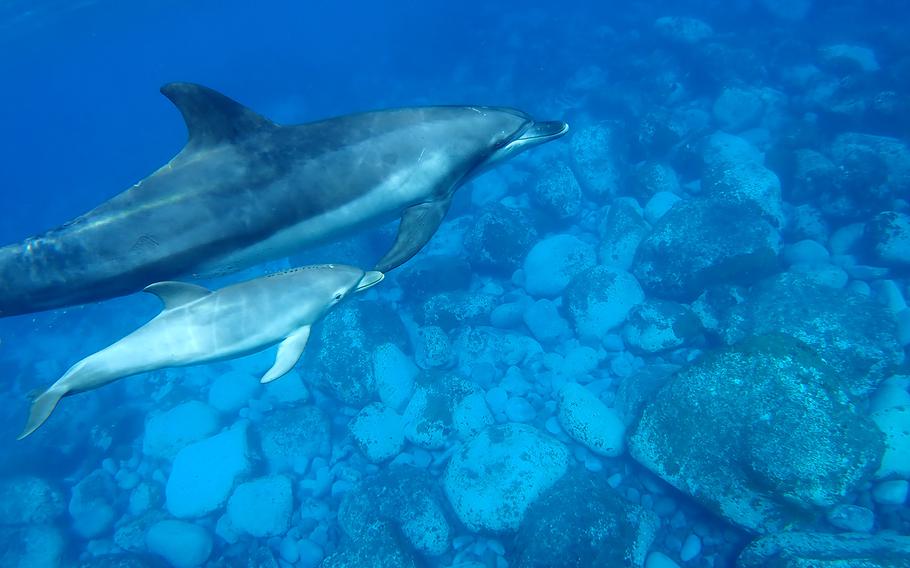 An Indo-Pacific bottlenose dolphin swims with a calf near Mikura Island, Japan, in May 2019. (Aya Ichihashi/Stars and Stripes)

Folks in the Tokyo area who want to swim with wild dolphins don’t have to travel far or spend a fortune to realize their dreams.

All you have to do is get to Mikura, one of the Izu islands, which is 124 miles and an eight-hour ferry ride south of the city.

The ferry leaves at around 10:30 p.m. from Tokyo’s Takeshiba Port and gets to the island by 6 a.m.; however, Mikura is a notoriously difficult place to dock a ship. There are no reefs or a beach around Mikura, meaning nothing protects the skinny, pointy pier from the waves.

When the sea gets rough, or a strong northern wind blows, the waves often wash over the pier, and ships are unable to dock. In 2018, only 59% percent of arriving ships, on average, were able to dock at Mikura. If that happens to you, don’t worry, they refund the ferry fare and you can try again.

My friends often ask me why I would take such a risk and go through such a hassle to reach that island. I always answer with a smile: “To swim with the dolphins!”

Mikura is famous as a natural habitat for Indo-Pacific bottlenose dolphins. About 120 dolphins are living around the island in groups of males and females.

About 300 people live on the island, which has a few shops and a handful places to stay. Room reservations on the island are very competitive, especially during the dolphin swim season, which runs from late April to early November. Since the whole island is a national park, dolphin swimming and hiking are permitted only under a certified guide’s supervision. Camping on the island is prohibited.

When my ferry docked at the pier, I jumped up and down with excitement, joy and relief, because the journey had been canceled the night before due to bad sea conditions — 18-foot waves — and it was still choppy, so I had to reschedule my ticket.

When I disembarked from the ferry, I saw Mr. Iwamoto from Mikuraso Inn waving at the end of the pier. Captain Hirose of the Katsudori tour boat was there to greet me, too. He smiled and said, “My goodness, I cannot believe you made it! You are super lucky! Yesterday’s ferry was canceled, you know?”

The captain was impressed with our good luck and told us, “The ocean is still rough, so we can only go around half of the island. Let’s hope that with your luck, we can meet dolphins.”

A dolphin swim does not require much skill because you can wear a life vest or wetsuit to float and swim. However, you must be able to snorkel under potentially choppy and rough conditions without getting panicked.

A tour usually lasts up to two hours and guests can try five or six swims without stressing the dolphins. Each swim can range from five minutes long — when dolphins keep coming back — to a few seconds, when dolphins dive down deep, telling you they are not in the mood to play.

I got to meet a few baby dolphins on my visit and interacted with the cutest dolphin, named Smile. She showed her belly, then stood still, looking into my eyes from below for more than a minute, then went in circles around me.

Ms. Iwamoto, our dolphin swim guide, told us earlier during the dolphin-swim briefing to forget about our cameras and focus instead on making eye contact with the animals.

“Don’t try to chase them, but wait for them, so they can relax with you to swim,” she said.

And she was right. I kept making eye contact with them and they stayed with me, going around in circles several times.

At Mikura, dolphins are not caged or fed; they choose to live around the island. Unlike migrating dolphins, they are super friendly thanks to the Mikura people, who have protected them for decades.

“We don’t fish for a living; we only catch what we eat, so there are more fish for dolphins,” the captain said.

During my stay, I went on five dolphin swim tours despite the sea conditions and had a fantastic time. It is like throwing a dice to get to the island, but I hope you are crazy enough to try to meet the Mikura dolphins while in Japan.

COSTS: A one-way ferry ticket from Tokyo costs 7,800 yen (about $71) for second-class coach. Fares may vary depending on the season. You must reserve a room on the island before reserving a seat. An overnight at a minshuku (bed-and-breakfast-style accommodation) starts at about 8,500 yen. A two-hour dolphin swim tour costs about 8,500 yen. Most places on Mikura do not accept credit cards. Bring your own gear (mask, snorkel, fins and wetsuit) to save money.