Zamami Island's Ama Beach, which is frequented by green sea turtles who come to graze on seaweed, is next to a campsite popular with foreign tourists. ()

Zamami Island's Ama Beach, which is frequented by green sea turtles who come to graze on seaweed, is next to a campsite popular with foreign tourists. () 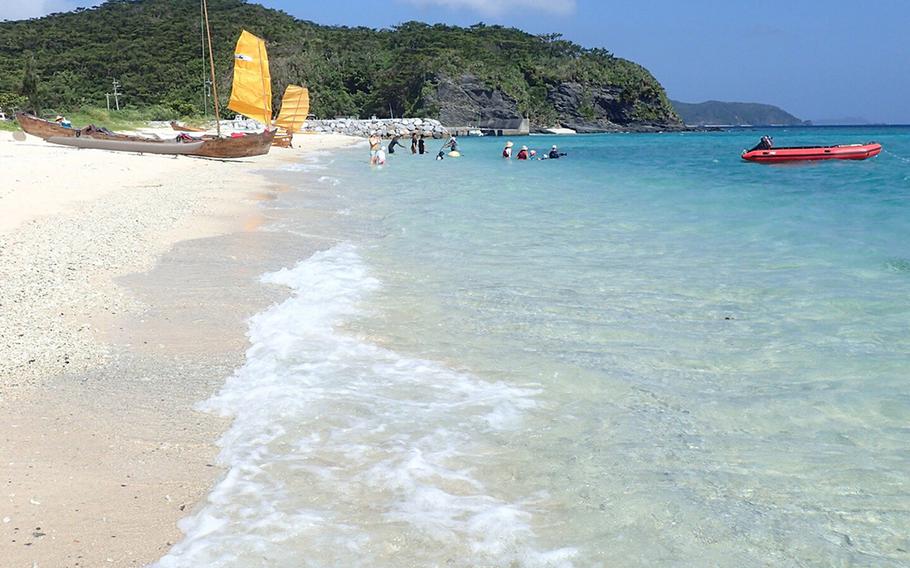 Zamami Island's Ama Beach, which is frequented by green sea turtles who come to graze on seaweed, is next to a campsite popular with foreign tourists. (Aya Ichihashi/Stars and Stripes)

CAMP FOSTER, Okinawa — Local officials on Okinawa have appealed for visitors to stop littering on the tropical island prefecture’s beaches after complaints surfaced recently on social media about U.S. servicemembers.

The issue was first raised on Labor Day, Sept. 2, when the Zamami Island beach patrol posted photos of litter to Instagram. Village officials said the trash was left by both Japanese and U.S. military visitors to the island.

The trash was left at both the beach and the port and included Pabst Blue Ribbon beer cans, red Solo Cups and plastic exchange-brand water bottles typically sold only at U.S. military installations.

“Starting [Aug. 30], there were Y-plate cars parked at the site and many military-looking, young groups and families were there,” said Tatsuya Hata, chairman of Zamami Beach Patrol. “They all spoke American English and lived on Okinawa mainland. There were only a few Japanese groups at the site.”

License plates that begin with the letter “Y” are reserved in Japan for Americans under the status of forces agreement.

Zamami is one of the Kerama islands, which also include Tokashiki and Aka, approximately 20 miles west of Okinawa’s main island. The islands are accessible by a 50-minute high-speed ferry ride.

Litter being left by U.S. servicemembers on Zamami’s beaches has increased in recent years as the overall traffic has increased since the island was named a national park in 2014, Hata said.

“Just because you cannot find a trash can, why would you leave it on the street?” he said.

Violating Japan’s Waste Management and Public Cleaning Law by littering can draw penalties of up to six months in prison or a $463 fine, Japanese government websites state.

Marine Corps officials on Okinawa and Kadena Air Base’s 18th Wing were contacted for comment on Sept. 17 but did not respond. The U.S. military in Japan holds beach cleanups each year at nearly every installation near a beach, pulling thousands of pounds of trash off Japan’s beaches each year.

Japan’s Tourism Agency of the Ministry of Land, Infrastructure, Transport and Tourism declined to comment on U.S. servicemember littering. The Okinawa Defense Bureau, which represents Japan’s Defense Ministry on the island, said it hasn’t seen the reports of littering on Zamami.

Zamami Tourism Association officials had not heard reports specific to U.S. servicemembers except for a case in January in which a Torii Station-based soldier was arrested after breaking nine street lights at a cost of $13,000.

The Okinawa Convention & Visitors Bureau said this week that U.S. servicemembers should not be singled out for littering.

“Locals and other visitors from outside of Okinawa also trash the beaches and campsites,” a spokesman said. “Some trash is floating waste from elsewhere and some is obviously discarded by visitors and locals. The beach trash problem has been a headache for all of the districts on island.”

Tokashiki Village official Norio Ozaki came to the defense of the U.S. servicemembers who visit that island.

U.S. servicemembers “are easier to work with as they listen to guards and staff,” Ozaki said. “This goes to every visitor to the island: Please bring back everything you brought as our garbage disposal plant is made for our village population of about 761, and we welcome 20,000 visitors a month during the peak season. It is just too much trash to handle.”

Hata also had a message for people who litter.

“We are happy that visitors come to the island and it sure boosts our economy,” Hata said. “However, please have manners and obey the rules. If you guys cannot do that, then please go elsewhere.”