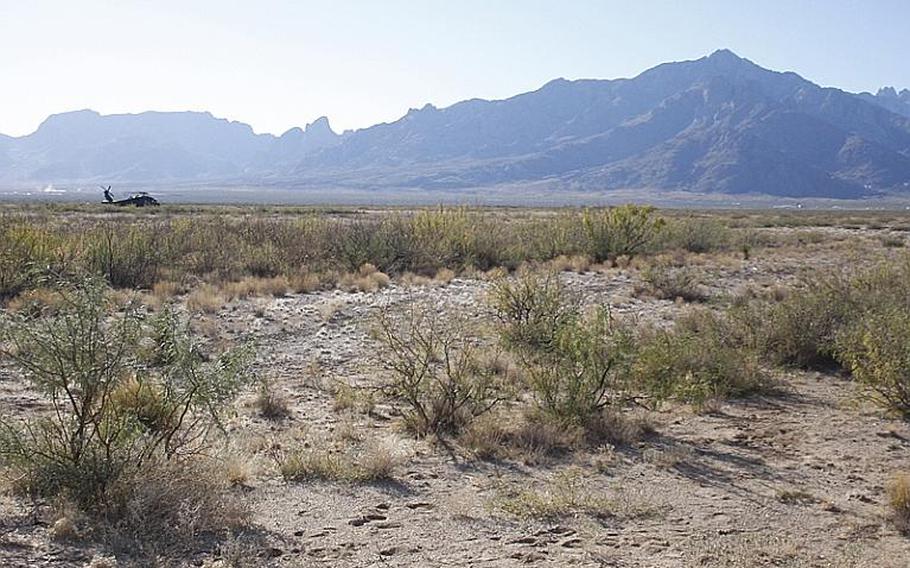 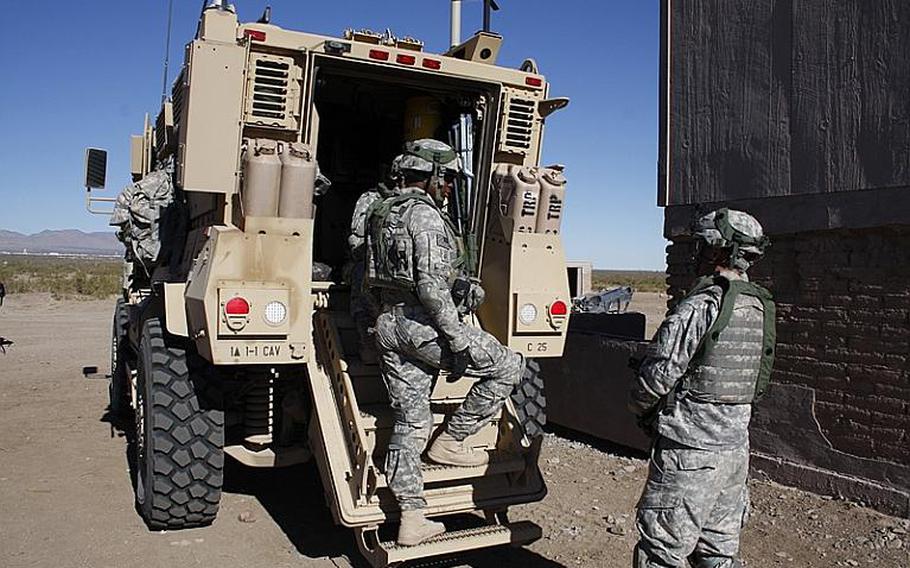 Buy Photo
A soldier enters an MRAP outfitted for mobile communications at White Sands Missile Range on Nov. 16, 2011. Testing communication abilities while on the move was a key priority at the Army's Fall 2011 Network Integration Exercise. (Chris Carroll/Stars and Stripes) 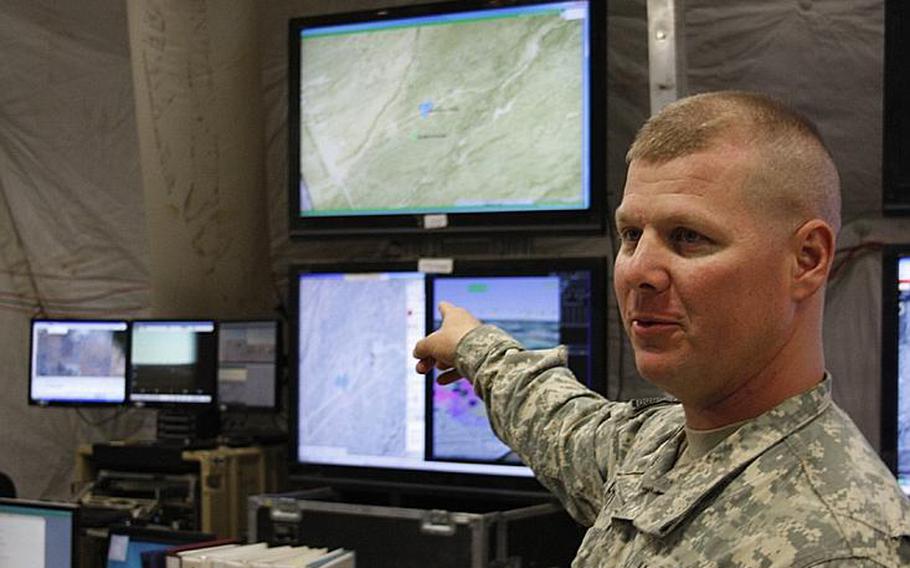 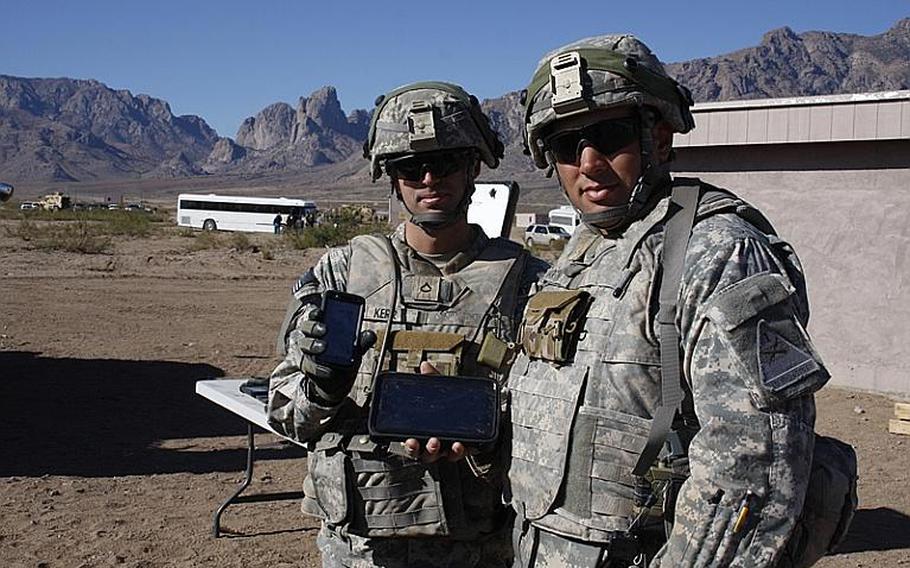 Buy Photo
Nett Warrior shows soldiers an overhead view of the battlefield on LCD screens of either a smartphone or a tablet computer (the radios to which the devices are connected are not visible in this photo, taken Nov. 16, 2011.) An earlier, more complex version of Nett Warrior was killed after soldiers at the Army's Network Integration Exercise deemed it too cumbersome. (Chris Carroll/Stars and Stripes)

WHITE SANDS MISSILE RANGE, N.M. &mdash; Two soldiers, their boots crunching on spent shell casings and sand in the cold desert morning, were surrounded. Barren mountains rose in the distance as they made their stand among the battered brown buildings of a small village.

But it wasn&rsquo;t Afghanistan, and they weren&rsquo;t getting shot at.

Instead, they were in the American Southwest getting peppered with questions, lots of questions, about a high-tech prototype communications system that is part of a revolutionary Army testing protocol aimed at quickly supplying downrange troops with needed IT devices and systems.

Pfc. David Kramlich hefted a secure radio in one hand and a smartphone-like device in the other. Connected by a thick wire, the devices link soldiers to a developing Army communications network that leaders say will be the backbone of future operations. The handheld system, part of the Joint Battle Command-Platform, or JBC-P, shows them their locations via an onscreen map, along with the locations of friends and foes.

&ldquo;Well, I don&rsquo;t think it works too well at all,&rdquo; he finally said, explaining that icons showing vehicles or other soldiers on the move often inexplicably disappeared from the device&rsquo;s LCD screen.

Hearing the honest verdict of soldiers on the ground was the reason the crowd had assembled at White Sands Missile Range in New Mexico earlier this month. It was an open house of sorts for the Army&rsquo;s Network Integration Exercise, or NIE, designed to bypass the typically ponderous process of getting gear to soldiers.

Starting this year, the Army says it will run two NIEs yearly, each several weeks long. In October and November, the 3,800 soldiers of the 2nd Brigade, 1st Armored Division put more than 40 information technology systems &mdash; government-developed and commercial systems alike &mdash; through their paces. It culminated in a large-scale combat exercise spanning thousands of square miles of desert terrain.

Successful systems that fit well into the overall network can get on a fast-track for distribution downrange. But several that didn&rsquo;t measure up in the first NIE, held in the spring, have already been killed or undergone drastic redesign.

Perhaps the most high-profile victim was Nett Warrior, a system in development for more than a decade in one form or other that is functionally similar to the system Kramlich&rsquo;s unit was testing.

When Nett Warrior arrived at the spring NIE, it was a bulky mess, with components and wires arrayed all over the soldier&rsquo;s torso and head. With batteries, it added nearly 15 pounds to an infantry soldier&rsquo;s already heavy load.

Soldiers bashed it for its weight and difficulty of use. When Nett Warrior showed up at the NIE this fall for further testing, it had been pared back to a small radio and a smartphone or tablet computer. The new Nett Warrior is nearly identical in form to the JBC-P handheld, and program managers said the two could be merged into one system in the future.

In the exercise earlier this year, they tested the troubled Joint Tactical Radio System-Ground Mobile Radio, or GMR, a piece of equipment in development by the Army for years that simply didn&rsquo;t work well, Chase said.

Partly as a result of the NIE testing, the Army canceled the GMR program this fall and announced it would look for a commercially available radio to do the job.

&ldquo;To know that we&rsquo;re having an effect, and to know we&rsquo;re helping supply the things soldiers need downrange to do their jobs &mdash; that&rsquo;s gratifying,&rdquo; Chase said.

The NIE process is the brainchild of Army Vice Chief of Staff Gen. Peter Chiarelli, a noted smartphone enthusiast who says the Army should use the best off-the-shelf technology while emulating the agility of commercial tech companies.

A fully functioning Army network that provides seamless communications from the field to the highest levels of leadership &ldquo;will make our various formations more lethal, faster and more survivable on today&rsquo;s battlefield,&rdquo; Chiarelli said earlier this year. &ldquo;The network will literally redefine how we fight in the same way that social media has changed the way we interact and communicate in our personal lives.&rdquo;

But traditional military development processes are so slow that when high-tech equipment reaches the operational stage, it&rsquo;s already badly outdated. Instead of taking advantage of the state of the art, the normal Army method is &ldquo;like developing a 2007 iPhone today and putting it into service five years from now,&rdquo; said Col. Daniel Hughes, who is in charge of systems integration for the exercise.

While the testing of individual gadgets by soldiers is a big part of the NIE, there&rsquo;s much more to it than that. Not only do all the devices have to work together, they have to work with the higher-level system that links the entire battlefield together.

The backbone of the exercise is the Warfighter Information Network-Tactical, or WIN-T. It&rsquo;s a satellite communications network designed to be quickly set up anywhere the Army operates. It must carry voice, data, even live video between headquarters, commanders on the ground and troops in the field. In addition to the 3,800 soldiers in the brigade, hundreds of civilians were on hand to monitor, test, and if necessary, fix the network.

WIN-T is being developed incrementally, with current work focusing on getting individual soldiers and commanders in moving vehicles fully linked up. That day can&rsquo;t come soon enough, said Sgt. Gary Tillery, who leads the squad that Kramlich serves in.

The system his men tested is far from perfect, he admitted. But the veteran of multiple combat tours in Iraq said it still easily beats not knowing where your comrades are located when the shooting is about to start.

&ldquo;I&rsquo;ve definitely experienced that,&rdquo; he said. &ldquo;Two squads are setting up on opposite sides of a road &mdash; unless you know where every person is, that&rsquo;s a friendly-fire risk waiting to happen.&rdquo; The promise of the system outweighs its current problems, he said.

&ldquo;This works to a degree, but it&rsquo;s not ready to be put into use,&rdquo; he said. &ldquo;But that&rsquo;s why we&rsquo;re here, to do the testing needed to work out the problems and make it better.&rdquo;