At end of 5-nation trip, Hagel restates immutable US presence in Mideast 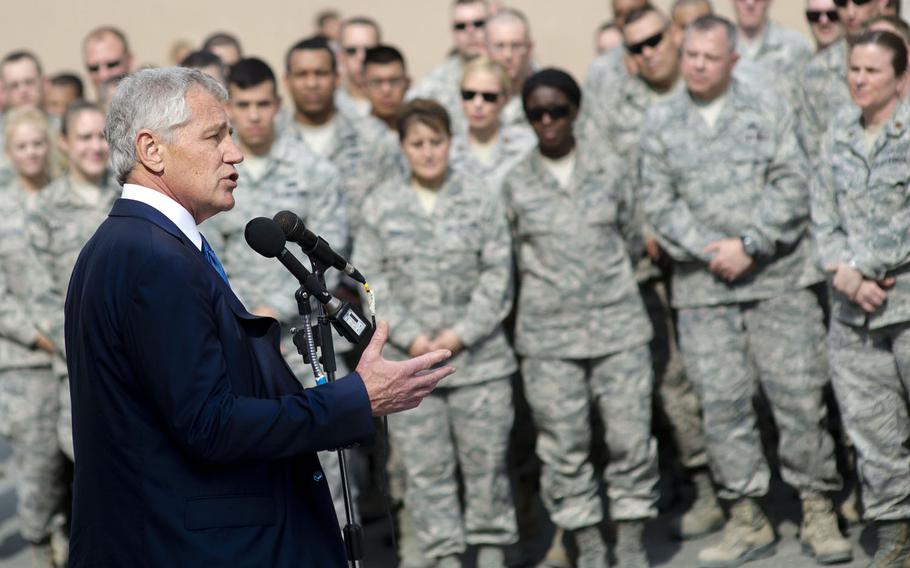 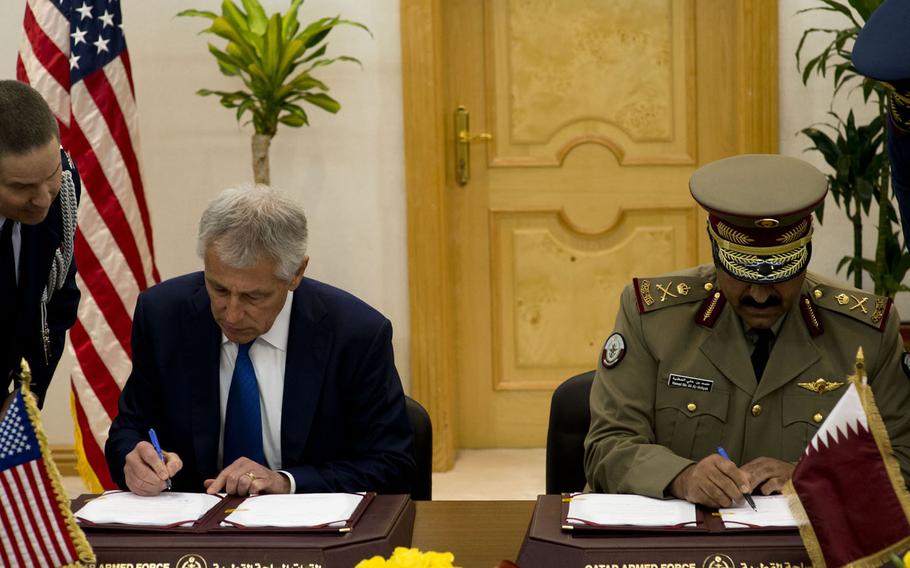 AL UDEID AIRBASE, Qatar — Defense Secretary Chuck Hagel wrapped up his five-country trip to the Middle East on Tuesday in a meeting with troops at a critical U.S. air hub that once dared not speak its name.

But the former “airbase in Southwest Asia,” as Stars and Stripes and other publications for years referred to Al Udeid Airbase, Qatar, at the military’s request, is now being publicly acknowledged by Pentagon and Air Force officials.

The shift is symbolic, officials said, of the immutability of the U.S. presence in the Middle East even as the Afghan war winds down and the United States focuses increasingly on the Asia-Pacific region. It’s a message Hagel conveyed repeatedly meetings over the past several days with officials in Bahrain, Afghanistan, Pakistan and Saudi Arabia.

In the U.S. war zone, he met with civilian and military officials but did not schedule talks with Afghan president Hamid Karzai. The unpredictable leader is squabbling with the United States over the signing of a security agreement that confers immunity from the Afghan legal process on U.S. troops and sets the parameters for a post-2014 training and counterterrorism mission. Hagel acknowledged that after weeks of stern pressure to sign the document from U.S. and world officials, there was little hope more pressure would sway Karzai.

In Pakistan, Hagel met with the country’s new Army chief and the prime minister, urging them to help ensure NATO shipments into and out of Afghanistan are able to move on Pakistani ground routes. U.S. officials recently stopped deliveries at a crucial border crossing to protect drivers from protesters on the Pakistan side angry about deadly drone strikes in Pakistan.

He said that because of politics in Washington, future U.S. military aid to Pakistan could be affected by delivery problems.

Hagel spoke to about 150 troops from across the services who were gathered near the seemingly immovable, fortified walls of the Combined Air and Space Operations Center, or CAOC, which coordinates military air missions throughout U.S. Central Command.

Their mission to oversee military flights of 30 nations over Afghanistan, the Gulf and elsewhere, he said, represents his view of the future of a U.S. military that operates closely with partners around the globe.

“It’s where the world is going,” Hagel told troops.

Hagel met earlier Tuesday morning in Doha with Qatar’s Emir, Sheik Tamim bin Hamad, and later with the Minister of State for Foreign Affairs Maj. Gen. Hamad bin Ali Al-Attiyah. In the second meeting, Hagel signed a defense cooperation agreement that gives the U.S. access to Al Udeid and governs training, exercises and other cooperative activities between U.S. and Qatari forces for the next 10 years.

Hagel said he and the Qatari dignitaries covered a range of regional security topics, agreeing that it’s vital to keep up pressure on Iran for an agreement that prevents the regime from building a nuclear weapon.

A temporary deal between Iran and several world powers that freezes Iran’s nuclear program while negotiators pursue a permanent solution has worried U.S. allies in the Gulf, who fear Iran’s hand might be strengthened. One of Hagel’s primary missions on the current trip has been to reassure leaders in the region that’s not the case.

“Our force posture isn’t changing here in this region,” Hagel said. “Our cooperation, and recognition with all of our partners here (about) the threat of Iran, the challenges that we all face, are real. We’re not going to take any pressure off.”

Discussion also focused on Syria, where the United States supports what it calls moderate opposition groups that eschew links to al-Qaida and other terrorist groups. Qatar meanwhile supports a wider range of groups targeting the regime of Syrian president Bashar Assad.

“I restated our position that are we are supporting a moderate opposition,” Hagel said. “The opposition in Syria … is very fractured and includes terrorist organizations.”

But even more than talking with Middle Eastern allies, Hagel said the No. 1 purpose of his journey was to thank U.S. troops for their sacrifices and answer their questions.

“As our force structure comes down ... bringing our branches in line with the missions and the resources, everything will be affected,” he said. “You’re going to have less people, therefore less commissions and less billets.”

But worse than shrinking defense expenditures is the deep uncertainty that comes with not knowing whether Congress will pass a defense appropriation, or how big a cut will result from automatic cuts known as sequestration, the defense secretary said.

“What we want to do is do it in a way that’s responsible, that’s gradual, that slopes down in a responsible way,” Hagel said. “That’s why uncertainty in the budget, particularly sequestration, really hurts us on this. Because if these sequestration numbers continue, that means we’re going to have to make more abrupt decisions to come down faster.”

To another budget question from Senior Airman Brandon Whittaker, Hagel promised that troops were his top fiscal priority.

“With all the uncertainties, and the questions and the challenges, this institution is and always will be focused on its people,” he said. “With the sophistication represented here in this facility, the technology, all of the incredible things — it wouldn’t work without you. Nothing can work without good people.”