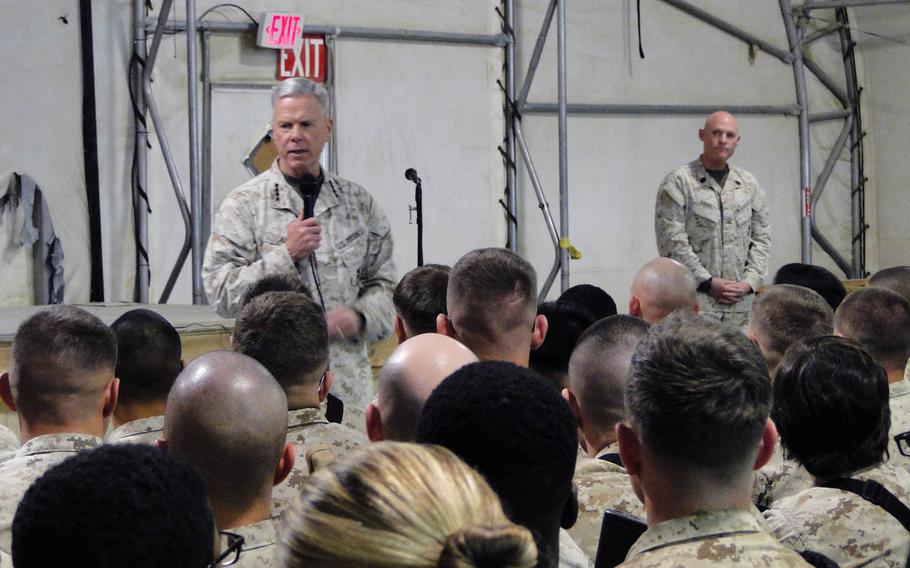 CAMP LEATHERNECK, Afghanistan — Marines have changed Helmand province dramatically and should be proud of the work they have done here, Commandant Gen. James Amos said Tuesday in a town hall meeting here.

When Marines leave at the end of this year, he said, “We’ll have done every single thing we’ve set out to do as a Marine Corps,” he said. “We’re not cutting and running … Marines don’t cut and run. We complete the mission.”

He noted that just a few years ago, there was only one battalion of Marines in Helmand province, and just a small British base.

The Marine Corps began building its presence in southwest part of Afghanistan in 2008, eventually reaching a peak with about 21,000 Marines in Helmand in 2010. Now, there are some 4,500 Marines in the province.

“We came in when this was the Wild West,” Amos said.

Yet even with the successes in Helmand, he said, a signed bilateral security agreement with Afghanistan is critical to long-term security.

“When we left Iraq, we left under a victory flag,” Amos said, with places like Fallujah and Ramadi secured, with a functioning government, police presence, running water and “potholes filled.”

However, he said, because of the lack of signed security agreement there, the U.S. did not keep troops in Iraq to continue assisting and mentoring the security forces.

“I’d argue that has a lot to do with what’s going on there now,” he said.

Amos and Barrett also addressed the issue of ethics, adherence to standards and good decision-making skills in the Corps.

As the military as a whole draws down, the Marine Corps will go down to 175,000 Marines, Amos said, making it the only service that will have more troops after the drawdown than it did on Sept. 11, 2001, when 172,000 Marines were on active duty.

“People believe in us,” he said.

Still, a series of high-profile incidents — including a video of Marines urinating on the corpses of Taliban fighters, and a photo of Marine scout snipers using a Nazi flag as a logo — have “brought shame on the Marine Corps,” Amos said.

The 98 percent of Marines who are doing well “form the fabric of the Marine Corps,” but “on the edges of that cloth, we’re starting to see some wear,” he said.

To combat those problems, Amos and Barrett said, they talked to Marine leaders and determined they didn’t need a new program, they just needed to get back to basics.

In October, Amos and Barrett wrote a letter to corporals and sergeants about a “reawakening” campaign, focusing on “persistent discipline, faithful obedience to orders and instructions, concerned and engaged leadership (24/7) and strict adherence to standards.”

“This doesn’t mean you’ve been asleep,” Amos said; the program is meant to “reawaken the soul of the Marine Corps.”

Barrett said that 83 percent of the Corps is a sergeant or below, so it makes sense to focus the effort on those ranks.

“There is an enemy inside our wire,” Barrett said, listing drugs, alcohol, domestic violence, criminal misconduct, sexual assault, and general “jackassery” among the enemies.

However, he said, noncommissioned officers “are the solution to every one of those poor life choices.”