Air Force to dismiss anyone found to have committed sexual misconduct 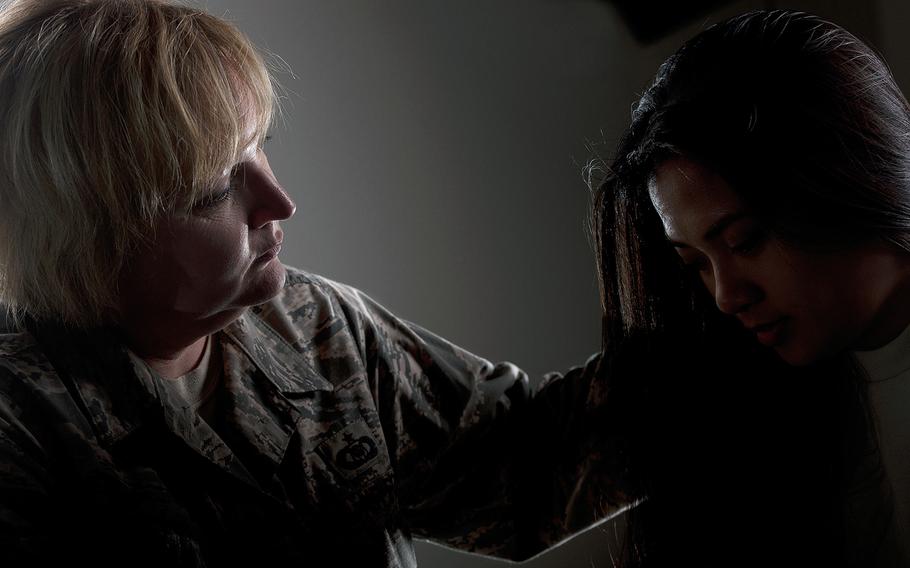 April is Sexual Assault Awareness Month and with mission readiness and effectiveness at the forefront of strengthening the Air Force, the eradication of sexual assault is a top priority. The Altus AFB Sexual Assault Prevention Response program is dedicated to eliminating sexual assault incidents through awareness and prevention training as well as education, victim advocacy, response, and reporting. (U.S. Air Force Photo by Senior Airman Jesse Lopez/Released) (USAF photo illustration by Jesse Lopez)

KAISERSLAUTERN, Germany — Airmen who commit any type of sexual misconduct, whether groping a co-worker or rape, face dismissal from the service under a tough new Air Force policy aimed at eliminating such behavior from the ranks.

The new guidance, which took effect July 3, requires commanders to initiate separation action for any officer or enlisted airman found to have committed or attempted to commit a range of sexual offenses.

The measure is among several new Air Force policies dealing with cases of sexual assault and related misconduct.

Airmen in a position of trust found to have engaged in an unprofessional relationship — such as dating a potential recruit or military trainee — are also now subject to mandatory administrative discharge.

The service also has taken steps to protect airmen from retaliation for reporting sexual assault. Any orders of involuntary discharge issued to airmen who have filed a recent unrestricted report of sexual assault are to be reviewed by a senior commander.

But the biggest change, Air Force officials say, relates to mandatory discharge for committing a sexual offense. It means that an airman can be involuntarily discharged without a criminal conviction, as long as the misconduct is documented administratively, either by a letter of reprimand or an Article 15, a form of non-judicial punishment, according to Air Force officials.

“It’s to reiterate … a ‘get tough’ policy as it relates to sexual assault, and to let everybody understand, especially the uniform wearers, that this kind of misconduct and inappropriate behavior has no place in our Air Force and if you engage in it, then we’re going to take steps to remove you from the Air Force,” said Scott Martin, senior air staff counsel for the Air Force’s office of the judge advocate general.

Since the policy is so new, it’s unknown if anyone has been affected by the policy yet.

The stricter guidelines come as reports of sexual assault in the military are at an all-time high:

The Pentagon says there were 3,374 reported cases of sexual assault in the military last year, a record. It estimates, based on anonymous surveys, that as many as 26,000 sexual assaults went unreported last year.

While all the services are under intense congressional pressure to reduce the problem, the Air Force has faced fiercer scrutiny for a series of embarrassing incidents. They include the sex scandal at the Air Force’s basic training base at Lackland, Texas, involving drill instructors and recruits to, most recently, the arrest in May of Lt. Col. Jeffrey Krusinski, who once led the Air Force’s sexual assault prevention program, for sexual battery, a charge that was later replaced with a generic assault charge.

Gen. Mark A. Welsh III has said combatting sexual assault, which he characterized as a crisis, is his No. 1 priority as the Air Force chief of staff.

Air Force leaders broadened the scope of the congressional mandate to include those who committed or attempted to commit other sex-related misconduct such as aggravated sexual contact, abusive sexual contact, and a range of sexual misconduct involving a child as outlined in Article 120 of the Uniform Code of Military Justice.

The key element of the change, Martin said, is that mandatory dismissal — resulting in an “other than honorable” discharge — can be triggered not just for a conviction.

“If a commander believes you’ve been engaged in misconduct but it is not something that warrants a criminal proceeding, he or she has the authority to administer punishment for your behavior.”

“It could be a situation where there was an unwanted touching,” Martin said, where, for example, “an individual reaches out and grabs the breast of somebody in the workplace … over the clothing.” Depending on the evidence, that could be an offense under the UCMJ, but not necessarily one that would be tried at a criminal proceeding.

The commander could also formally document the sexual misconduct if it occurred off base but was not prosecuted by local authorities, Martin said.

Most serious offenses are handled at courts-martial, Martin said. If an airman was convicted and didn’t receive a punitive discharge, commanders typically initiate separation action, recognizing “it was the right thing to do,” he said.

Even if an airman managed to avoid a punitive discharge after being convicted of a sex-related offense in a court-martial, the rules for mandatory discharge would still apply under the new rules.

“The commander would be required to initiate separation action because he’s been convicted of the offense,” Martin said.

Earlier this year, Tech. Sgt. Bobby Bass — a former basic training instructor — was allowed to stay in the Air Force despite being convicted of 31 counts of abuse, assault and cruelty. One of the charges of which he was convicted was abusive sexual contact.

Under the policy, Bass would not have been allowed to stay in the service.

“I don’t know that this is necessarily a huge swing in the way we do business, at least in the Air Force,” Martin said. “But it does not give commanders any discretion if they [airmen] meet the basic criteria.”

Eugene Fidell, an expert in military law and a lecturer at Yale Law School, has concerns about the new guidance, however well-intentioned it may be.

The policy “seems inelastic, and that is not in keeping with settled military justice doctrine,” he wrote in an email. “Commanders are supposed to exercise judgment and discretion, and the policy seems at odds with that.”

He’s also concerned that airmen may receive a “stigmatizing discharge without much process.”

“In sexual assault cases it may be essential to be able to confront adverse witness in an evidentiary hearing, as opposed to merely being able to send the commander a letter of appeal. The correction and discharge review boards are not a viable remedy if there is no real opportunity to dispute charges in the first place. And few if any airmen have the resources to seek relief in the federal courts.”

A commander or an airman can submit a waiver for retention, but the airman in question must meet a long list of criteria. In addition, the separation board or separation authority must consider the impact of the sexual assault on the victim and the views of the victim on retention, according to the Air Force guidance.

Martin said commanders won’t be “trying anybody, but they can hold them accountable administratively.”

The Air Force, he said, already has similar mandatory discharge procedures in place for illegal drug use. “We have used that model to base the sexual assault provision on as well,” he said.

Taryn Meeks, the executive director of the human rights organization Protect Our Defenders, said the Air Force’s mandatory discharge policy for those who commit sexual assault and other sex-related offenses is a start, but more needs to be done to fix the military’s justice system, if sexual assault is to be eliminated from the ranks.

“Our concern is making sure commanders no longer have sole discretion” on whether a case goes to court, she said.

Having some sort of convening authority that exists outside the change of command will lead to less bias and a more transparent system, Meeks said.