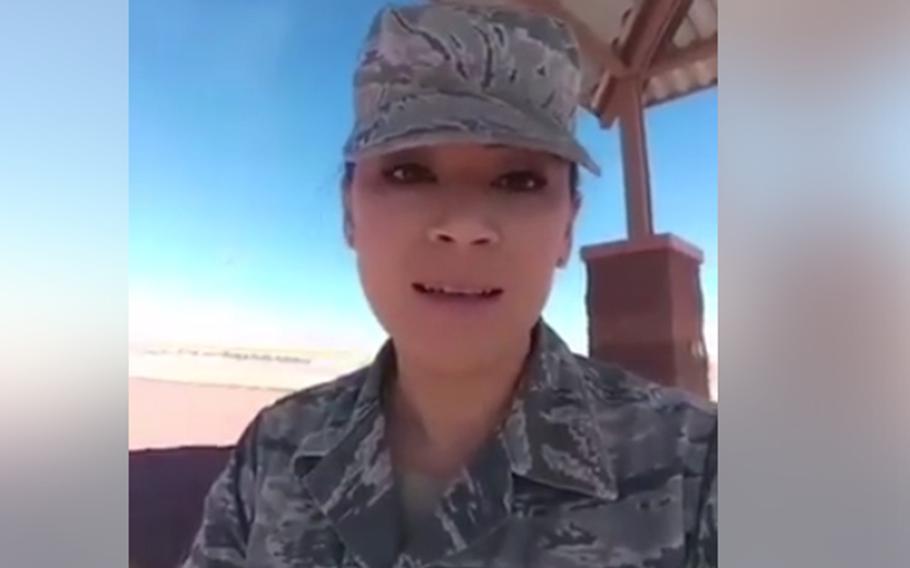 WASHINGTON — The Air Force says it has disciplined the technical sergeant at Nellis Air Force Base in Nevada whose profane and racially charged diatribe about subordinates went viral in January.

In a video posted on a private Facebook forum, Tech. Sgt. Geraldine Lovely ranted about black female subordinates, whom she said were disrespectful. A portion of the video was then reposted on a public Facebook community page dedicated to Air Force airmen, noncommissioned and senior noncommissioned officers.

Without releasing details, 99th Air Base Wing public affairs chief Maj. Christina Sukach said that Lovely had been “held accountable for her actions” and that the air base wing leadership was “satisfied with the outcome.” She said the administrative record of a servicemember is private under military code.

“Nellis Air Force Base leadership emphasizes that any activity which disparages anyone because of their race, religion, gender or sexual orientation will not be tolerated,” Sukach said. “Servicemembers are responsible for their own actions, to include social media. Our airmen are too valuable, and our mission is too complex and perilous, to accept anything less than the tenets of our core values: integrity, service before self and excellence in all we do.”

Lovely, who was a noncommissioned officer in the 99th Force Support Squadron, used excessive profanity in the video while stating she was doing her best to remain professional and not “start a fight club.”

“I am trying my best to hold my professionalism with them but good God, they have no (expletive) respect whatsoever,” she said. Within hours, Sukach followed with a response calling the video “inappropriate and unacceptable behavior in today’s society and especially for anyone in uniform.”

The post drew millions of views and sparked a public debate over race and leadership in the service.

Within days, the air wing removed Lovely from her supervisory role and launched an investigation. A statement said the incident was an opportunity to “see if this is a broader issue on base” and to talk with airmen about good order and discipline and the Air Force core values.

It’s unclear what actions the Air Force took to address the issue.