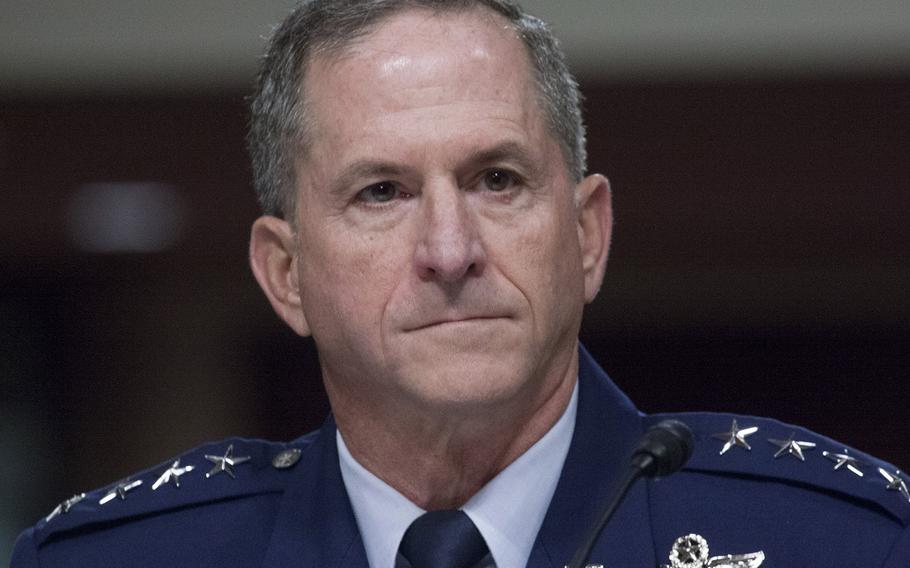 Gen. David Goldfein, at a Senate hearing in June, 2016. (Stars and Stripes)

WASHINGTON – Air Force chief of staff Gen. David Goldfein said Tuesday he’d like to see a federal regulation adjusted that requires private pilots to have 1,500 flight hours before they can fly for a commercial airline, in order to ease pressure on the military’s pilot shortage.

The Airline Safety and Federal Aviation Administration Extension Act of 2010 was signed into law after the 2009 crash of Colgan Air Flight 3407 in Buffalo, N.Y. Pilot error and insufficient airline safety procedures were identified as factors. The subsequent legislation addressed safety of flight, including raising the number of hours from 250 to 1,500 that a non-military pilot must have before being hired by a commercial airline. Military-trained pilots are required to have 750 hours.

The military felt the impact of the rule change. Getting 1,500 hours of flight can be prohibitively expensive for non-military pilots, whereas military pilots can rapidly obtain the hours required. Those active-duty pilots are often lured to leave the military by the commercial sector, Goldfein said.

“Right now if you got to have 1,500 hours to go be a commercial pilot, I am a really attractive source,” Goldfein said. Last month, Stars and Stripes reported that the Air Force had initiated conversations with the major airlines on how the two sectors could work together to alleviate pilot shortages. Several ideas, including amending the 1,500-flight hour rule and better scheduling reserve requirements, are under consideration. Goldfein will meet with top airline executives in May for more discussion.

“This is not just an Air Force crisis,” Goldfein said. “Everybody who has a pilot today is in this game. Because the reality is, if you look at the numbers, the airlines require 3,500 pilots every year through 2025. I produce about 1,200 a year. So what we have is actually a national shortage of pilots” for commercial, business and military needs.

Goldfein said it’s time for a look at how commercial aviation has changed, noting that technological developments might reduce the number of necessary flight hours.

“I think it’s worth a dialogue,” he told reporters Tuesday at a breakfast in Washington. “My personal sense is that it may not be required.”

Lowering the requirement would increase the number of available pilots nationally so military pilots wouldn’t be targeted, he said.

Goldfein said he is also interested in incentives for flight schools or universities that Congress could put in place to reduce demand on the military’s pilot sources.

The Air Force also worked with Congress in the 2017 National Defense Authorization Act to increase signing bonuses for pilots to $35,000 a year. But Goldfein said money alone won’t solve the shortage. He said retaining Air Force pilots has to do more with the overall impact of the pace of operations, reducing some of the non-flying related commitments and increasing the service’s readiness.

“There’s not enough money in the Treasury for me to buy my way out of this,” Goldfein said. “I think what is going to have as much of an impact is to increase quality of service of those that we have in the business.”